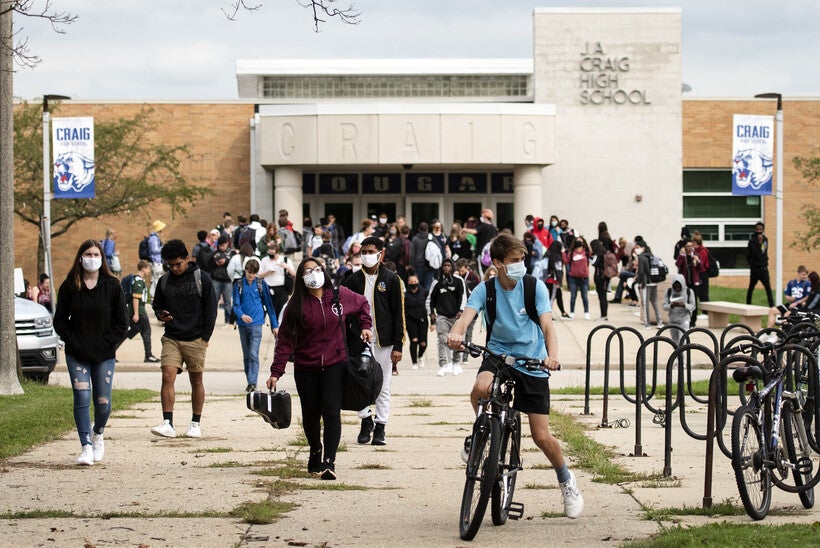 Students exit out of the front doors of Janesville Craig High School on Monday, Sept. 14, 2020, in Janesville. Face-to-face instruction is suspended at the school until at least Friday, Sept. 25, due to COVID-19 concerns. Angela Major/WPR

Schools across Wisconsin have seen a slowdown or decline in enrollment, particularly in 4K classes, compared to previous years. That pattern holds across public school districts, independent charter schools, and private school parental choice programs, according to new data released Thursday from the state Department of Public Instruction.

Enrollment in public school districts dropped 3 percent from September 2019 to September 2020, compared to a 0.4 percent drop in the previous 12-month period.

School enrollment in Wisconsin, and in other parts of the country, has been on the decline since the late 1990s, when the children of baby boomers — who themselves drove record enrollment numbers — were in their peak schooling years. However, amid uncertainty and near-constant changes in plans because of the COVID-19 pandemic, schools around the country have been seeing larger enrollment drops, especially in 4K and kindergarten classes.

The 4K enrollment drop is particularly significant, as the introduction of 4K programs at more Wisconsin schools helped offset the decline in enrollment numbers for many school districts during the post-millennium decline. September 2020 numbers show a 15.8 percent decline in 4K and preschool special education, as well as a 4.9 percent decline in kindergarten enrollment.

Because attendance is not legally required for 4K and kindergarten, DPI School Financial Services Director Dan Bush noted the drop in enrollment for those two age groups could reflect more families choosing to keep kids home, possibly out of health or school safety concerns surrounding COVID-19.

"Parents did have the option of holding their students back this fall, or choosing not to sign up for 4K," Bush said. "Obviously, more of them did in comparison to past years."

DPI will fill in more of the statewide enrollment picture in November, after analyzing data from families that homeschool and private schools that aren't in the parental choice programs, which have a later reporting deadline.

Grades 1 through 12, which are subject to Wisconsin's mandatory school attendance laws, saw a 1.9 percent decrease in enrollment.

September enrollment numbers at Wisconsin schools are based on the "third Friday count," an accounting of all students who are enrolled and present or marked absent on the third Friday in September.

Bush and other DPI officials who work with the state's private and charter schools said they got some questions and concerns early on about how to manage a count when school was virtual, but said after DPI put out guidance and schools had solidified their own instruction plans, those concerns slowed down, and counts largely went off without a hitch.

Wisconsin’s total school district headcount for the third Friday of September 2020 was 818,922. Wisconsin also saw a massive drop in summer school enrollment, which was down by 57.2 percent. The number of students in summer school dropped 11,388 students from 2019 to 2020.

"We had to do an emergency rule to permit virtual instruction for all students in all grades beyond what had previously been allowed," said Bush. "(Given) districts' ability to spin those types of programs up on short notice, and parents' interest in having kids participate in those or in more traditional summer school, I don't think that kind of summer school drop-off is really going to be a surprise to anybody."

"We're seeing some of the same (enrollment) trends in the private school choice program," said Chanell Crawford, director of parental education options at DPI, "though we won't have a full picture of whether or not some of those students went to private schools who do not participate in the school program, or went through out-of-home schooling, until (November)."

Though school enrollment numbers are used to determine how much schools can pull in through a combination of state aid money and property taxes, those revenue limits are based on a three-year "rolling" average of September enrollment and 40 percent of summer full-time enrollment, which means revenue limit decreases will not drop as precipitously in response to this year's enrollment decline as they would without taking into account the last two years.

There's also a declining enrollment exception, which provides a one-year top-up to what a district's revenue would have been if it hadn't seen a decline.

"For districts that are seeing a larger than expected decline, that declining enrollment piece of the revenue limit is going to help out this year," said Bush, "But next year, under current law, that would go away, and the full impact of this year's decline on the three-year average will be felt."

Bush said based on conversations around school funding that have cropped up amid COVID-19 budget woes, he expects potential legislation around extending the declining enrollment exemption will likely come up in legislators' negotiations around the next biennial budget.

The 2020-21 state budget included a 3.5 percent increase in school funding, an addition of $163.5 million, for a total of $4.9 billion to be distributed to Wisconsin schools. The majority of that funding, according to DPI, is equalization aid, which helps offset local differences in property wealth. It's distributed based on a formula that includes school district expenditures, property values, and resident student counts.

This year's state aid determination is based on last year's enrollment data, so it was "pretty well baked into the cake" at these levels regardless of COVID-19's effects on enrollment, said Bush.

"The steeper impact will be next year, when that decline in the average takes effect and the other state aids that are based on 2020-2021 data takes effect," said Bush.

Some of the other potential concerns around school revenue that funding experts have flagged are also likely to be delayed — particularly state budget cuts and possible drops in property tax revenue.

In addition to equalization aid, the state's general school aids include integration aid, or "Chapter 220" aid, and special adjustment, or "hold harmless," aid. Special adjustment aid, which will go to 49 districts this year, generally protects districts from experiencing more than a 15 percent reduction in aid from one year to the next.

Bush noted it's hard to tell whether the unusually steep drop in enrollment will continue next year.

"Basically, in May, I got out of the business of trying to speculate," he said.