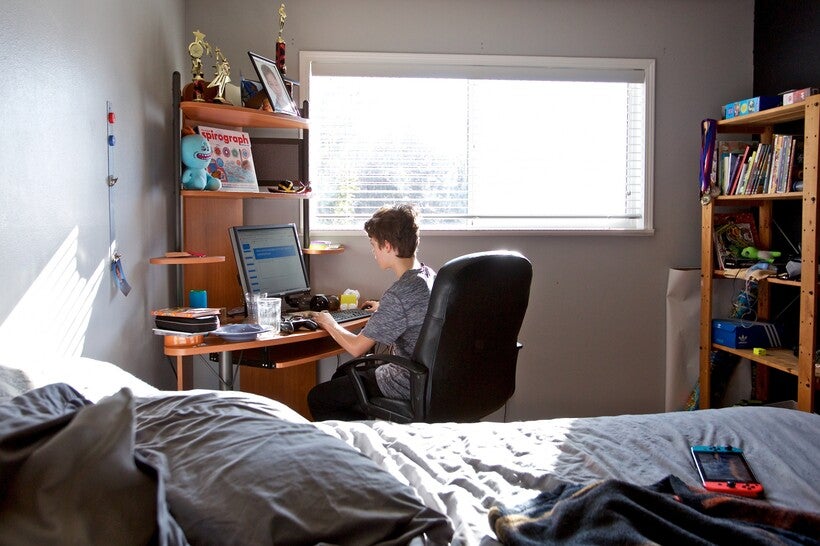 In this March 17, 2020 photo Elliott Bucks, works on an online class assignment from his sixth grade class at Arco Iris Spanish Immersion School in his bedroom in Beaverton, Ore. Oregon has shut down schools through April 28 and some districts have put optional activities online, though they are not meant to replace the regular curriculum. Craig Mitchelldyer/AP Photo

As Coronavirus Spread Increases In Wisconsin, Schools Look To Virtual Options. But Access Is Uneven

Virtual Contractors And Charter Schools Are Bracing For Higher Demand, But Limited Internet Remains A Barrier
By Madeline Fox
Share:

WIth COVID-19 cases on the rise in Wisconsin, it's boom time for providers of virtual education.

Wisconsin Virtual Academy, a charter school under the MacFarland School District that serves students around the state, has upped their trainings in anticipation of more families seeking a virtual-first option.

"Because of COVID, our program is growing, and we made sure to prepare for that this summer, in creating a new teacher training and orientation program," virtual academy head Fadia Afaneh told a Wisconsin legislative committee Thursday morning. "And we want other brick-and-mortars to know that we're here for you, this is not an easy time."

K-12 Learning Solutions, a contractor that helps 60 schools and districts in Wisconsin put together virtual curricula that can range from one or two classes to an all-virtual curriculum, said they're seeing far more interest in K-5 programming.

"We have in the past really focused on (sixth to 12th grade), or at least the demand has largely been on 6-12 courses," said Lorna Bryant, vice president of K-12. "The big demand for us, and the big demand from districts among those that we serve and new districts, frankly, approaching us, are around the ability to serve those younger students and support their parents, who may be supporting them at home as well."

Research comparing virtual schooling to in-person instruction is limited, especially for elementary school students, but generally speaking, studies and data analyses have found that online coursework is, on average, less effective than in-person classes. In its guidance to schools, the American Academy of Pediatrics advocated for schools to operate from a goal of in-person instruction, noting its importance in preventing social isolation, addressing learning deficits, spotting abuse and mental health problems and alleviating food insecurity.

However, with positive COVID-19 tests increasing substantially over the last month, Wisconsin's two largest school districts, among others, have opted to at least start the school year virtually, as have several other districts around the state. With that in mind, Afaneh said, some families are looking to Wisconsin Virtual Academy and the state's 51 other virtual charter schools, given their more extensive experience in online learning.

The success of virtual learning, whether from a charter, a contractor or a district itself, is hampered by limited access to the internet. According to the Department of Public Instruction's 2019-2020 digital learning survey, about 15 percent of Wisconsin students didn't have internet access in the home.

Jennifer Kammerud, policy initiatives advisor at DPI, said Wisconsin made some progress in internet access due the Keeping America Connected pledge through the Federal Communications Commission, which had internet service providers offering discounted services to families. But, she noted, many of those offers are expiring soon — and, in some places, were never accessible at all because the neighborhoods as a whole where they were needed had a low credit history, she said.

She noted DPI and local districts and libraries worked together to create an emergency Wi-Fi map that kept internet turned on at shuttered schools and libraries, but that, too, wasn't ideal, as it required families to park themselves in the parking lot for the duration of lessons.

"Moving forward, we do need to have a way to make sure students can access the instruction," Kammerud said.

Kammerud said DPI has seen some schools work to create their own virtual programs for the fall, while others have contracted with outside providers. Still, others have formed regional cooperatives that allow teachers who may need to stay out of classrooms for medical reasons to teach kids across several districts, allowing teachers who can work in school buildings to focus on their classroom teaching.

John Gaier, an administrator at the Neilsville School District, said his district ran into many connectivity problems, despite the schools themselves having high-speed broadband. He said nearly one in four of the district's families reported having inadequate or no internet connectivity, and the district has numerous areas without any cell service, which eliminated hotspots as a possible fix.

He said staff had to develop lesson plans for students that didn't involve technology. In the fall, they're opting for a blended return to classrooms.

"Not being able to attend school physically and trying to do all virtual in-home learning greatly magnified the inequity between families, and even between school districts," Gaier told lawmakers.