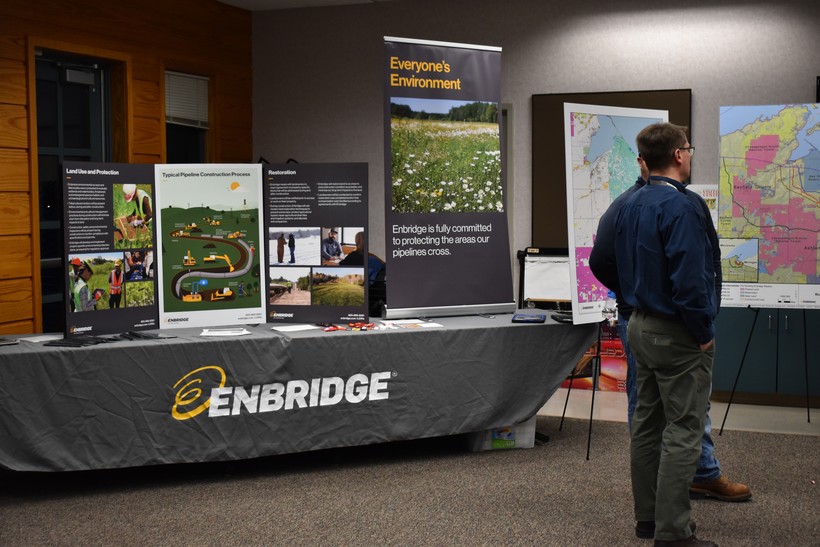 A Canadian energy firm says it won't seek to condemn private property for a proposed pipeline relocation project in northern Wisconsin because it's reached agreements with around 300 landowners along the route.

Enbridge wants to move its Line 5 pipeline after the Bad River Band of Lake Superior Chippewa filed a lawsuit to shut down and remove it. The line, which carries up to 23 million gallons of crude oil and natural gas liquids from Superior to Sarnia, Ontario, crosses a 12-mile stretch of the tribe's reservation.

The company withdrew its application with the Public Service Commission on Friday. Regulators would have reviewed whether the 40-mile reroute was in the public interest, and Enbridge was set to face a contested case hearing.

That is no longer necessary, according to Trent Wetmore, director of Midwest Operations for Enbridge.

"We designed and have now acquired an approximate 40-mile route, which will minimize environmental and social impacts while protecting sensitive resources," said Wetmore.

Landowners, community members and environmental groups have disputed the company's claims that it can build a pipeline with minimal impacts to the Bad River Watershed, which drains into Lake Superior. They fear the project threatens the water quality of more than 180 waterbodies, as well as groundwater supplies to homes in the area.

Bad River Tribal Chairman Mike Wiggins has also said the tribe intends to fight to remove Line 5 from the region due to the significance of the watershed. Enbridge offered the tribe a $30 million settlement, while Bad River asked for $45 million for trespassing in addition to shutting down and removing the pipeline.

Multiple groups who sought to intervene in Enbridge's case before the commission are disappointed they won't have an opportunity to present their position, according to Rob Lee, a staff attorney with Midwest Environmental Advocates.

"But, our clients also recognize that Enbridge still has a long way to go to make this reroute a reality and recognize that there's a great deal of opposition to the continued operation of Line 5, not just here in Wisconsin but really throughout the Great Lakes region," said Lee.

Enbridge is also facing legal challenges in Michigan where the state's Attorney General Dana Nessel has also sued to shut down Line 5 in the Straits of Mackinac connecting Lakes Michigan and Huron.

Lee noted there's still opportunities for public input on the project, adding they'll be taking a hard look at all the permits and approvals needed for the reroute. An attorney representing landowners in the case could not be immediately reached for comment Monday.

Enbridge said it's completed wetland, archeological and tribal cultural resource surveys that have been submitted to the Wisconsin Department of Natural Resources. The agency is in the early stages of conducting an environmental impact statement on the project, which will determine whether the company receives waterways and wetland permits.

Opponents of the project point to the company's history of spills that includes one of the nation's largest on land near Marshall, Michigan, in July 2010. The rupture cost the Enbridge $1.2 billion to clean up more than 1 million gallons of oil from the Kalamazoo River.

The National Wildlife Federation has also found that Line 5 has seen around 30 spills that have released more than 1 million gallons of oil and natural gas liquids on land since 1968.

Enbridge has said the pipeline serves as a vital energy link in the Midwest that has operated safely since 1953 and has never had a spill in the Great Lakes. The company has also said it's invested billions to improve the integrity and safety of its pipeline system over the last decade.

Enbridge hopes to begin construction on the project within the next year, pending permit approvals.