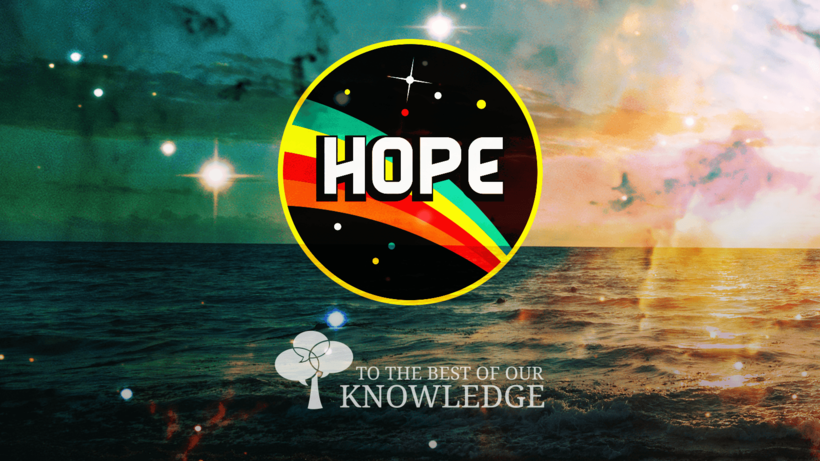 Can We Find Hope? Or Do We Need To Make Our Own?

Lessons On The Who, Where And How Of Hope From The Three-Part "To The Best Of Our Knowledge" Series
By Shannon Henry Kleiber
Share:

If we took in all the noise of the world — the devastating news about our environment, the political fighting, the inexplicable violence — and paired it with our own buzzing personal troubles — big or small, about our health and families and finances — it might seem the only logical reaction is to lose hope.

But hope isn't really something to be lost or gained. It's an action we take, a pattern of thinking, a channeling of either (depending on who you ask) a higher power or our deepest evolutionary impulses to survive in an uncertain future. People are searching for and finding hope in themselves, in their faith, in their communities and in their actions. Some make more hope out of the worst despair. We know this through anecdotes, science and — maybe the most telling evidence of all — just that we are still here.

Conceptually, hope feels big, amorphous, hard to define exactly. But for the past few months, "To The Best Of Our Knowledge" producers have been trying anyway. Scientists, activists, futurists, theologians, artists, authors all weighed in on what they think when they hear the word "hope." The aim was to try to give us all a greater sense of where our hope comes from, how we might put more into the world and how a "deep hope" might help us weather the darkest times ahead.

Hope has guided our survival as a species, and might sustain us through the apocalypse.

For a neuroscientist like Tali Sharot, it's part of the job to quantify the synapses we define as a feeling of hope or of optimism. She tells us that we are hardwired for hope from birth. Most of us — 80 percent, she said — are naturally optimistic.

"Hope is what you want to happen," said Sharot. "Optimism is the belief that what you want to happen, will happen." Sharot, author of "The Optimism Bias: A Tour of the Irrationally Positive Brain," said we can at the same time have private hope and optimism but public worry. "We tend to believe we have control over our own life, that we can steer the wheel in the right direction," she said.

This difference between public worry and private hope is why many people draw their greatest hope from their families, especially younger generations. Climate change journalist Roy Scranton struggled with this paradox. He definitely believes our planet is doomed by cataclysmic climate change — but also that it's dangerous to give up on the species altogether.

"I was thinking about the effects of catastrophic climate change in which we're looking at 2 to 3 degrees Celsius warming by the middle of the century," said Scranton, author of the recent book "We’re Doomed. Now What?"

"Thinking about the death of the oceans, thinking about the massive extinction event going on right now, and just the way that we've despoiled and poisoned the world that we live in," he said.

Despite his reservations, Scranton and his wife recently welcomed a little girl into the world.

"I didn't know what to say to her," he said. "I had brought her into this world and not fully grasped what that would mean for her life, so all I could do was cry and apologize. Eventually, I’ve come to make a promise to do my best to teach her how to live in this world — this damaged, doomed world — with some kind of grace and some faith that she can still have a rich and meaningful life."

The who, where and how of hope.

For many, hope is all about doing something — hope is a verb.

Black Lives Matter activist DeRay Mckesson found hope in the streets of Ferguson, Missouri, amid tear gas and shouting. He showed up and looked around to see what needed to be done as the days and weeks of marching wore on. The first thing he saw? People needed food. So he started making peanut butter and jelly sandwiches.

"You know, most organizing starts off really small," said Mckesson. "It’s often a neighbor saying 'I think there should be a street light' and then people get together and start organizing it all. It doesn't always have to be this top-down model. (In St. Louis), we did something that was so special and we did it all together, and that changed the mood of the country."

The word hope — and what Brown University theologian Andre Willis calls the grammar of hope — doesn't mean the same thing to everyone. Willis is looking for a "deep hope," and he’s not afraid of pushing people to move past a "shallow hope" — like hoping your pizza comes on time — to a hope that is truly profound and life-changing.

Deep hope is about resilience drawn from community, and about living in the present moment. If times are tough, dreams feel dashed, or generally, the world seems to be crashing down, a deep hope is what helps us through to the other side. "Whether (it) can improve the situation or not is not the question — it's the togetherness itself," said Willis. "It's not future-directed or future-oriented. It's not engaged with a kind of probability question about what's coming later, but it's fully present."

Like Scranton, Willis believes the toughest times are ahead, and they are unavoidable.

"The best thing we can do is to prepare for what's coming," said Willis. "The problem's not going to go away. We can do better to confront it, but we're not going to solve it. How do you live with that? That’s the kind of deep hope I'm calling for. Be present to it. Be together with others in it and face it honestly. That's a form of hope that we don't see a lot in our culture."

There's a link for many between faith and hope, but theologian Serene Jones said that hope is not reserved only for those who are traditionally religious. Hopeful people, she said, "don't ascribe to a particular religious tradition, but have this profound need for spiritual connection, a sense that I think is indigenous to our souls."

Hope is all about community, according to novelist and professor Chigozie Obioma. His home in Nigeria has consistently been rated one of the happiest places on earth — despite the nation's poverty, war and violence. Obioma's firsthand experience confirms the neuroscience — Nigerians are innately hopeful people, no matter their external situation. Part of this comes from having a broad support system of cousins and siblings, he said, that is steadfast and something one can always count on.

"Here in Nigeria, everybody lives on a miracle," said Obioma. "People believe generally that no matter what circumstance they are in right now, it is going to turn around."

In dark times, hope can take us to the outer reaches of our imagination — and to space.

Community, faith, good works — these are the pillars of hopeful corners of humanity. But what about the hopeless? What can we offer to people who feel severed from these wellsprings of hope?

Perhaps art can bring people back to hope.

With its more ethereal worlds of art, music and literature, art offers a back door to hope, says science fiction writer Victor LaValle. "It is absolutely magic," says LaValle about how art affects us. "There's no reason it should do what it does. Just a series of characters on a page, or on a screen or a painting or a sculpture. Why should that thing somehow sort of like crack you open in a way? Who knows. But that's the power of doing this thing we do."

LaValle turned speculative fiction on its head by gathering and editing a collection of inspiring futuristic tales for his recent book "A People’s Future of the United States." The stories range wildly, delving into the worlds of artificial intelligence, border walls and dragons. But the curated whole is meant to help the reader imagine a future that allows space — and hope — for everyone, including the most alienated and isolated among us.

"The idea of this book was to say there are a lot of people talking about what our future will be, but almost all of them are talking in a very narrow and often very pessimistic sort of viewpoint," said Lavalle. "And we wanted to imagine the future as this broad and diverse and wildly revolutionary thing — that the future is all of ours."

"We felt like this is our chance to just sort of kick in that door and just let everybody in," said LaValle.

Art can make people feel seen in the present too. Rapper Common does that with his music — a sonic vehicle to drive listeners toward a broader, more optimistic today and tomorrow. "Hope has to do with also seeing things that may not be right there tangible right there in your face at the moment," said the hip hop artist Common. "It is having faith in the unseen."

The unseen isn't just in the minds' eye — the unseen can also be a far-away world that we can imagine as a second home for humanity. Mars expert and aerospace engineer Robert Zubrin finds hope in the reality of outer space, mainly because why would we even strive to do such crazy things if we don't have hope that it's part of doing something bigger and better for the species?