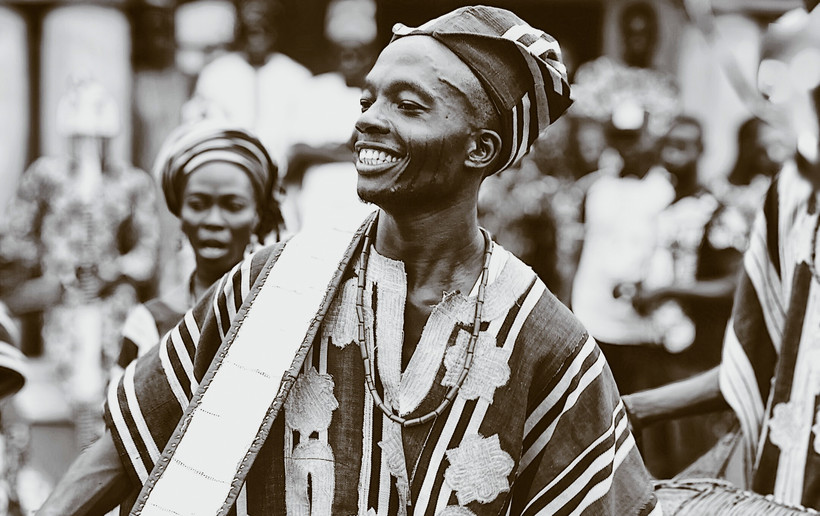 Man along an unnamed road in Obafemi Owode, Nigeria. 26 Everything Films (CC0)

The Unyielding Optimism Of Nigeria

Author Chigozie Obioma On Why Happiness Is Noisy And Communal, But Despair Is Silent And Alone
By Anne Strainchamps
Share:

When it comes to hope and optimism, Americans could learn a lot from Nigeria, which has consistently been ranked among the most optimistic nations in the world.

Chigozie Obioma is an award-winning novelist who grew up in Nigeria. He’s a professor of English and creative writing at the University of Nebraska-Lincoln. He’s become increasingly concerned about the high rates of depression he sees in his students.

"I've been an academic in America for the past four years and almost every semester one or two students have taken their own lives. And I just keep wondering, what’s driving this?" said Obioma, speaking to Anne Strainchamps for "To the Best of Our Knowledge." "To an outside observer, life seems good for all of them. All my students have cars and they're like, 17 or 18 years old. In Nigeria, where my parents live now, maybe two out of five families have a car. It’s a luxury. But my students — they can wake up, pick up their passports and go anywhere. They have at least enough money to make ends meet. So why do they lose hope so easily?"

The Guardian invited him to investigate. So on a recent trip back to Lagos, he spent a week walking around, taking taxis and asking people about happiness.

Anne Strainchamps: What did you ask?

Chigozie Obioma: The first question was always "Are you happy?"

The second would be something like, "Is this all you have? What is your job, are you married?"

And then I’d ask the ultimate question: "In your current condition, have you ever considered ending your life?" When I asked that, most of them got mad at me!

CO: Yes, they’d be like, "how could you even think of something like that? Are you not a Nigerian?"

AS: Because suicide is frowned on in Nigeria? Or because they were offended by the suggestion that they might be unhappy?

CO: I think it really is just the African way of seeing life. As my dad’s uncle said to me once, "In Nigeria, everybody lives on a miracle." People believe that no matter what their circumstance is right now, it’s going to turn around. You even see it on billboards on city buses — the most common one is "No Condition Is Permanent."

I think it also has to do with the support system. You know, we have extended families — I call my cousins my brothers and sisters. I don’t see them as cousins. So you’re responsible not just for yourself but for your whole clan of people.

AS: There’s a stronger sense of connection to other people?

CO: There’s an ineffable feeling that I get whenever I'm in Nigeria. I’m not trying to idealize it (since) there are a lot of things I hate – the poverty, the politics. But there’s something about the humanity of the people that strikes me as unique.

It might be because so many people you encounter, people you don’t even know, often seem invested in your life; they’ll ask questions that an American might consider invasive. There’s a kind of freedom there that I don’t feel when I’m in the U.S.

AS: I’m happy to hear you say that, because I was in Ethiopia recently, in Addis Ababa — like Lagos, a huge city with a lot of very conspicuous poverty, which was hard to see. But sitting on the plane, coming home, I realized that I was really sad to be leaving, and I asked myself what, exactly, I would miss. It’s hard to pin down, but I think it was the spirit, or mood of the city. Do you know what I mean?

CO: Yes, absolutely. You know what my mom said when she came here? She has only a primary school education and can barely speak English, but she made an observation I can’t forget. She was like, "What happened here? Is there some kind of curfew? There’s no noise, no one’s making any sound." I told her, "Welcome to America."

You can get arrested here for playing loud music. But if you go to Lagos, the first thing that shocks you is the noise, the animation, how insanely lively and boisterous and loquacious it is — like a thousand voices in your head at the same time. It feels more alive.

AS: Sounds like hope and optimism are things the rest of the world could learn from Nigeria?

CO: Well you know, being poor is not a virtue. Having an insanely corrupt political system is not a great thing, either. But the African sense of hope — yes, I wish people here could learn that.

There’s a student of mine — from the first moment she entered my class two years ago, she was always talking about being depressed. So I took it upon myself to have extra contact with her, gave her books to read, asked her to write stories for me and let me read them. I’m trying to make her see that she could be a great writer in the future, that she can make something of herself. And I think that has helped. She tends to be more hopeful now; instead of that bleak perspective, she talks about wanting to have a future.

So I do think people can learn that. It’s necessary, I think.