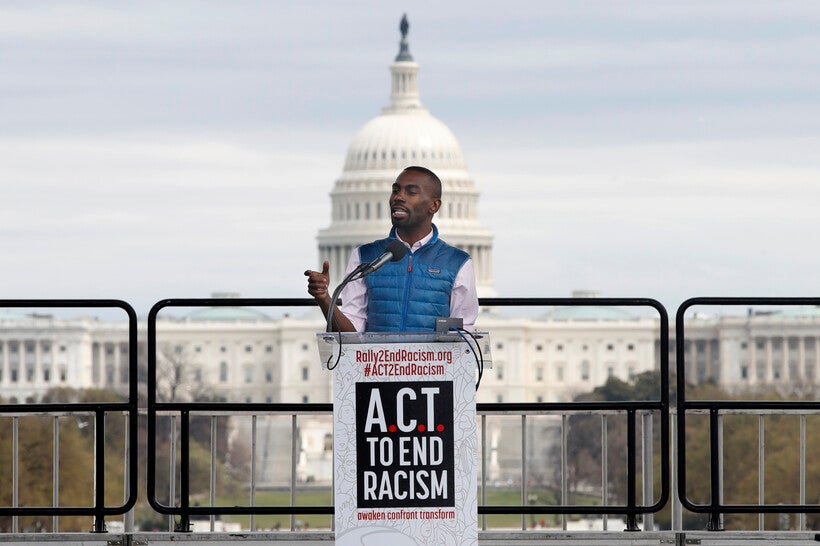 DeRay Mckesson has become synonymous with the Black Lives Matter movement — and with his blue Patagonia vest.

After the Aug. 9, 2014 police shooting of Michael Brown in Ferguson, Missouri, Mckesson became a fixture of the city's streets. But he arrived from Minneapolis uncertain of what the actual work of being in Ferguson would entail.

So one of the first things he did was make sandwiches.

He took it one day and one need at a time. It's part of a nurturing mindset Mckesson has followed since his childhood in Baltimore, being raised by his single father.

"I grew up in a community of recovery — helping people, watching people put their lives back together," said Mckesson, speaking to Shannon Henry Kleiber for "To the Best of Our Knowledge." "So that really influenced the way that I thought about communities coming together, what it means to make amends, and how people can heal and recover." 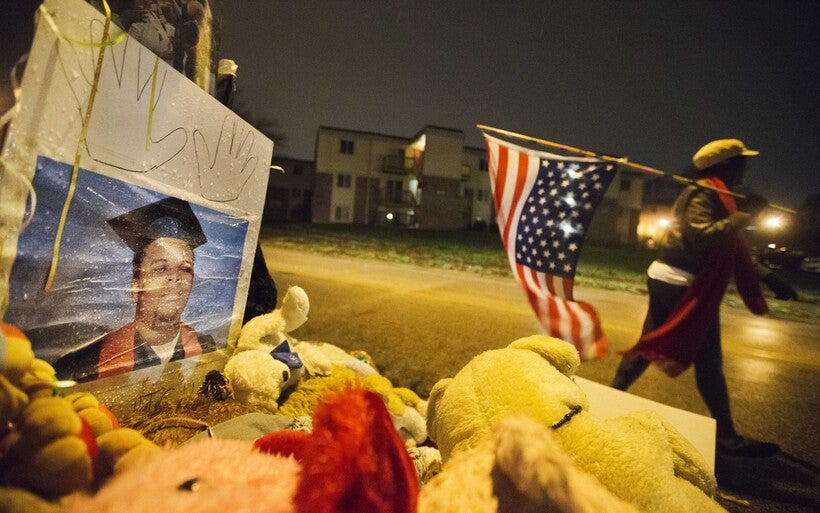 In this Nov. 22, 2014, file photo, a woman carries an American flag past a high school graduation photo of Michael Brown at a memorial more than three months after the black teen was shot and killed by a white policeman in Ferguson, Mo. David Goldman/AP Photo

Mckesson says that hope for big change is great, but it doesn't go anywhere without those small actions where people take care of one another.

"I think about us in the street in St. Louis — we didn't join a group. We weren't in a club. But we did something that was so special and we did it all together," said Mckesson. "That changed the mood of the country."

Mckesson spoke to Kleiber about how he ended up making those first peanut butter and jelly sandwiches, and where he hopes small acts of care can lead.

Shannon Henry Kleiber: I am usually a pretty optimistic person but lately everyone seems so angry and there's so much political fighting, there's climate change we're worried about, and I get overwhelmed with the day-to-day news. How can we get beyond this? How can we have hope?

DeRay Mckesson: Yeah, I think about hope as a belief that tomorrows can be better than our todays.

I think that what you see all across the country is hope work. You see people running for office. You see people engaged in electoral politics joining committees. You certainly see people on the street — people publicly say that this can be bad, (but) I think that that is actually what hope is.

When (Rev. Dr. Martin Luther) King (Jr.) says that the moral arc of the universe bends toward justice, that's about faith. But when we say it bends because people bend it, that's a hope statement.

SHK: I love how you talk about hope as work and what you're just saying is not easy. How do you talk to other people about it? What words do you use? How do you convince other people to do this work?

DM: One of the questions is 'What are you interested in?' 'What do you think isn't working that you want to work in?' It's that simple.

Most organizing starts off really small — the first thing I ever did in Ferguson was make peanut butter and jelly sandwiches. That was how it started.

SHK: How did that happen? Did somebody say, 'Hey, we need some food. Who knows how to make something?'

DM: So there was just like an incredible sense of community in Ferguson in the very beginning. Sometimes people think of organizing as starting in like some grand way every time, but it often is like a set of neighbors saying, 'I don't think this street light should look like this,' 'I think there should be a street light,' and then people get together and start organizing it all. It doesn't always have to be this top-down model.

In this Aug. 18, 2014 photo taken with a fisheye lens, people protest for Michael Brown who was killed by police Aug. 9 in Ferguson, Mo. Charlie Riedel/AP Photo

SHK: I like that. I think that one of those lessons is: start somewhere. Don’t just think you can’t do it.

DM: Yeah. One of the ways that the status quo continues to thrive is that it convinces you that you don't have any power. That you feel like you are like this helpless person, you're one vote (that) doesn't matter. The status quo endures because the people who are feeding you that message are the people voting every single time. They're heavily involved, but they're banking on the fact that you won't be involved.

SHK: So what's your advice to people who are losing hope?

If they can remake the tax code on the back of napkins, we can actually do all of this in a generation. This doesn't have to be a 10-generation solution. We can do this pretty quickly.

When I see people's hope waning, (I tell them to) remember that people made this up. This isn’t divine. It's a little slow sometimes. Change doesn't happen as much as we as we want it to, but it moves, you know? 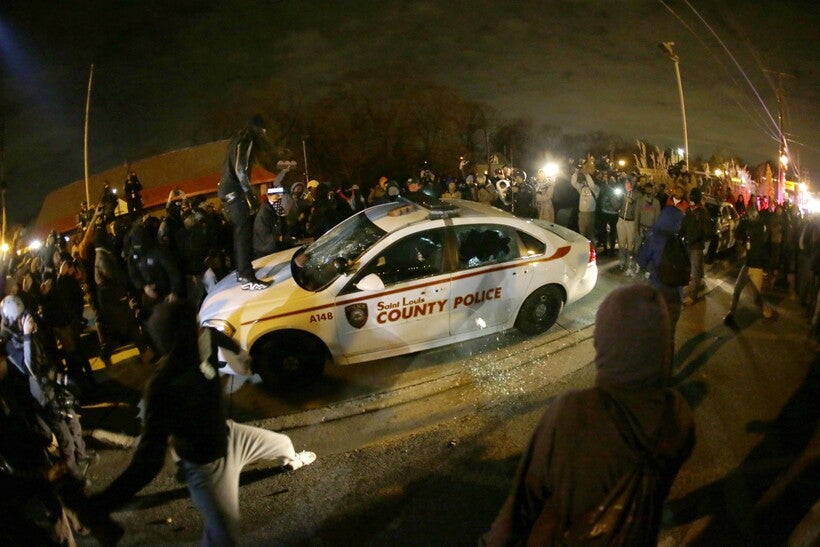 A protester squirts lighter fluid on the police car as the car windows are shattered near the Ferguson Police Department after the announcement of the grand jury decision Monday, Nov. 24, 2014, in Ferguson, Mo. A grand jury has decided not to indict Ferguson police officer Darren Wilson in the death of Michael Brown, the unarmed, black 18-year-old whose fatal shooting sparked sometimes violent protests. Charlie Riedel/AP Photo

SHK: So do you ever feel like the anger is helpful?

DM: You know, it was early in the protest that I had to figure out what to do with the anger; that I had thought that I needed to move the anger out of the way. Part of this work is about saying that the anger just can't overpower the other emotions, but we shouldn't have to try to erase the anger.

I'm always reminded that we didn't bring the violence. The only reason I'm in the middle of the streets is because the police killed somebody. I didn't do this, I didn't start this.

SHK: You were a sixth grade math teacher in Brooklyn, right?

DM: Yeah, yeah. You know, I think a lot about my students. I have a lot of responsibilities as an adult to try to make the world a better place.

I think that I went down to St. Louis because they killed a teenager. Mike Brown was a teenager and he should be alive today.

So my commitment to young people — the thing that I rest on when things get really hard — is knowing that we have a responsibility to make the system better for other people.

SHK: So you've got a big fan base — people know you by your vest. There are so many people who really get what you're doing. Do you also talk to people who don't agree with you? And how do those conversations go?

DM: I always try to take it back to the simplest parts of the work: it’s that I believe we can live in a world (where) the police don't kill people. I don't think that's a dramatic idea.

You know in Cleveland, the police department destroys disciplinary records of police officers every two years. I think that's generally a bad thing, right? Some of this is pretty basic, and I try to make it as basic as possible.

Some of the people that ostensibly say they disagree with me want to use these really emotional arguments about police officers having hard jobs, that it's a hard world. All of that can be true, and we still shouldn't delete police officer records. Officers shouldn't walk into somebody's apartment and say that they think it’s theirs and shoot them dead, right?

All of those things can be true and we still can have a system of justice that isn't predicated on killing people — and we don't have that yet. 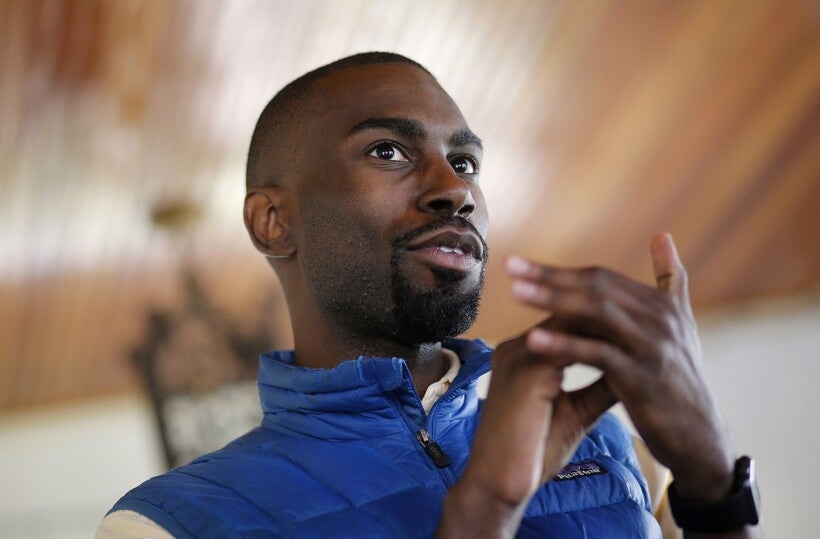 SHK: So I am guessing you're wearing a blue vest.

SHK: And can you tell us a little bit about why you wear it? Is there ever a moment you won't need to wear it anymore?

DM: Yeah, I don't think it's about need. You know, it is important to me.

So we were in the streets for 400 days. It got cold, and I needed something I could wear that I wouldn't have to pack, because we were on the street all night. And the vest was easy, the vest was simple, I’ve had the vest for a while. And I still wear it because it reminds me that everything we went through happened.

I never thought that would be a thing for other people, which it has become, but it just keeps me grounded and focused.

SHK: It's a symbol for you.

For other people, I think of it more as a symbol.

It's in the same way that some people have tattoos. Most people wouldn't call their tattoo symbols, but it's a thing that just is important to me as a reminder.