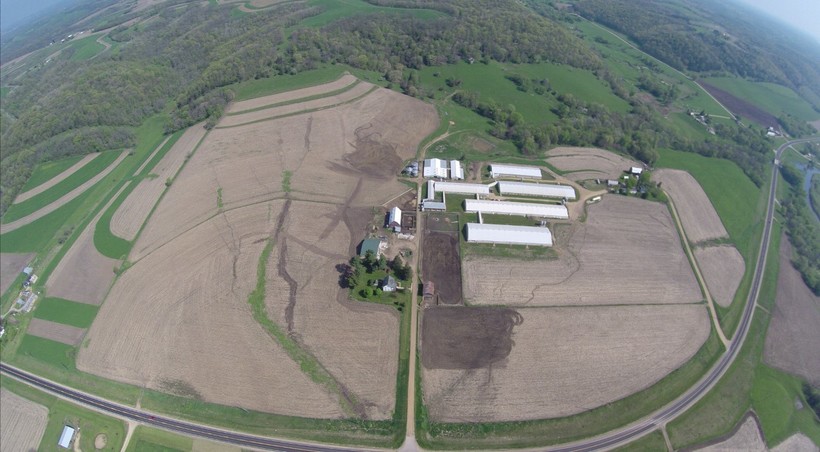 A photo of the current Roth Feeder Pig farm in Crawford County. The farm's owner Howard "AV" Roth received approval to build a second facility on May 6, 2022. Photo courtesy of Crawford Stewardship Project

Roth Feeder Pig, Inc. will build a second facility in Crawford County that some residents fear will pollute water
By Danielle Kaeding
Share:

The Wisconsin Department of Natural Resources has approved plans from the owner of a large-scale hog farm to build a second concentrated animal feeding operation, or CAFO, in the state’s Driftless Area.

The DNR issued a wastewater permit on Friday for Howard "AV" Roth, owner of Roth Feeder Pig, Inc., to build a second facility that would house 8,160 swine and produce around 140,000 piglets each year in the Crawford County village of Wauzeka. The site is expected to generate around 9.4 million gallons of manure and wastewater each year that would be spread on roughly 1,400 acres of land.

The operation will include a composting area and three barns. Two barns will contain underground concrete storage tanks with enough capacity to hold waste for 251 and 299 days. 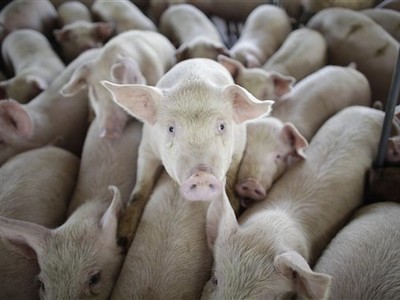 In this 2009 file photo, pigs press together on a farm in Mexico. Alexandre Meneghini/AP Photo

Some residents fear the CAFO will negatively affect groundwater and waters within the Kickapoo River Watershed. Steuben resident Kathleen Tigerman said she lives about a quarter mile from fields where manure would be spread, citing steep slopes and fractured bedrock that’s vulnerable to groundwater pollution.

"It could and most likely would pollute the (Kickapoo) River, but also just the smell of it is toxic," said Tigerman. "We live here in southwest Wisconsin. It’s karst geology since the glaciers didn't come through and smash it down. It's very fractured, and there is not much soil above the fractured rock underneath it."

Opponents have voiced concerns about the operation’s effects on air and water quality, wetlands, endangered species, human health, the site’s ability to withstand extreme storms and the operation’s proximity to burial mounds. The Crawford Stewardship Project and Midwest Environmental Advocates sent a letter to the DNR in 2020 that urged the agency to conduct an environmental impact statement, but the DNR decided that wasn’t required.

"My family lives here. The last thing I'd ever want to do is do pollute the water or anything like that," said AV Roth. "I'm a fifth-generation farmer. I plan on having Roths live here for the next five generations. It comes down to sustainability. I need to take care of the land and the water in the community, and I also got to be profitable."

The DNR said the permit for Roth contains conditions that protect water quality and avoid spills. Those conditions include barring any discharges from its production site to surrounding waters. The farm is required to maintain at least 180 days of storage, conduct periodic self-inspections and develop an emergency response plan for potential spills.

The permit also requires enough land to properly apply manure and a nutrient management plan that addresses phosphorus runoff. The DNR noted some fields have high potential for nutrient runoff into the Kickapoo River, which is already listed as impaired. 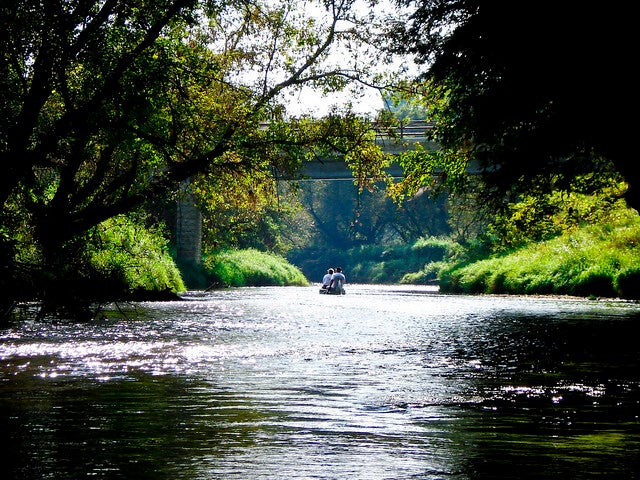 The farm can’t spread waste within 100 feet of nearby waters, sinkholes or private wells. The permit also bars spreading manure on fields with less than 2 feet of soil to bedrock and limits winter spreading of manure on frozen or snow-covered ground. The farm must sample the barns’ manure and wastewater twice each month and apply that at rates recommended by University of Wisconsin-Extension scientists to avoid spreading more nutrients than necessary.

Despite those conditions, the agency is not setting a cap on the number of animals or requiring the farm to monitor groundwater.

"We were hoping for some monitoring wells at least for the facility, if not, also for some of the major spreading areas as they have required for other operations," said Forest Jahnke, program coordinator for the Crawford Stewardship Project.

The DNR recently approved requirements for groundwater monitoring and a cap on the number of animals for Kinnard Farms in Kewaunee County, which the owner is contesting. The agency imposed those requirements in response to a Supreme Court ruling last year that allowed operating conditions on so-called factory farms to protect water quality due to the region’s susceptibility to groundwater contamination.

A review of wells nearby the second Roth facility found low levels of nitrate and bacteria, although no data was available at the production site.

Well sampling conducted in Richland, Vernon and Crawford counties in 2020 found roughly 8 percent of 293 samples exceeded the federal health standard for nitrates. A follow-up round of testing found 7 percent of 270 wells sampled had levels exceeding the standard that protects at-risk groups, including infants that could develop blue-baby syndrome. 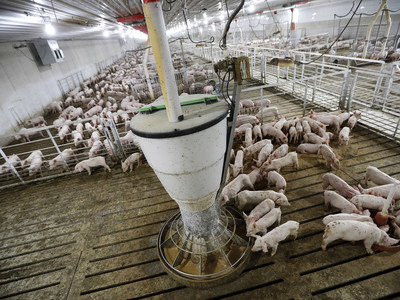 In a memo, the DNR said groundwater monitoring was unnecessary due to the depth of groundwater hundreds of feet below the surface. Soil borings show mostly clay soils ranging from 6 to 18 feet on top of bedrock that the agency said will limit manure from seeping into groundwater.

The agency contends the site’s karst bedrock and large depth to groundwater make it difficult to install effective groundwater monitoring wells. The DNR said any data collected from directly below the facility might not be useful for examining whether the farm’s activities affect groundwater quality because contamination is likely to travel away from the site instead of straight down into groundwater.

Roth expects to hire around 20 people, and documents filed with the DNR show the operation would have an annual payroll around $900,000 each year. The farm will now pursue a livestock siting permit from the county. Pending approval, Roth said it will likely take nine months to build the second facility.

Even so, Jahnke said the DNR’s standards don’t provide enough protection for sensitive areas that warrant local standards, such as CAFO ordinances passed by northern Wisconsin towns. Those ordinances are being challenged by the Wisconsin Dairy Business Association and Wisconsin Manufacturers & Commerce, who argue their attempts to regulate large farms are illegal.

The state currently has 327 permitted CAFOs, of which 251 are operating under updated permits. The Roth farm’s permit for its second facility takes effect on June 1 and lasts for five years.