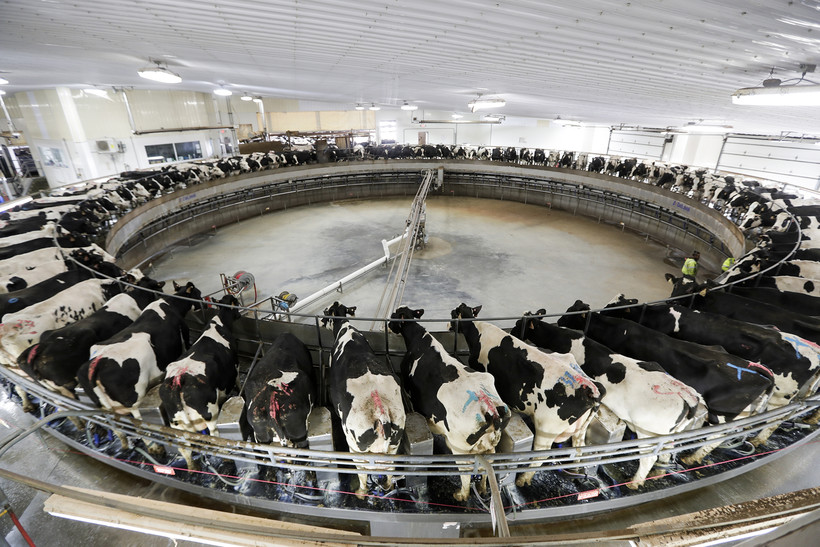 In this Dec. 4, 2019, photo cows are milked on a large carousel at the Rosendale Dairy in Pickett, Wis. At Rosendale Dairy, each of the 9,000 cows has a microchip implanted in an ear that workers can scan with smartphones for up-to-the-minute information on how the animal is doing, everything from their nutrition to their health history to their productivity. Morry Gash/AP Photo

But town leaders are standing by their regulations for how concentrated animal feeding operations, or CAFOs, can operate in their communities.

The Dairy Business Association sent a letter last week asking officials at the state Department of Agriculture, Trade and Consumer Protection for a material review of ordinances passed by two towns in Polk County and another in Burnett County. The communities are part of a partnership of six townships that have been working together to develop operational rules for CAFOs.

The dairy group claims the regulations "go far beyond current rules and regulations" for livestock farms in the state.

"The towns attempt to hold more farms under a Concentrated Animal Feeding Operation (CAFO) standard ... that are lesser in size than the threshold calls for. They try to impose regulatory aspects that are dealt with in other areas of the law that farmers otherwise must comply with, such as water use, animal safety and implements of husbandry," the letter to DATCP said.

According to the Dairy Business Association, a material review will allow DATCP officials to assess whether the local ordinances are consistent with state law. The review's findings carry no binding authority.

This week, Wisconsin Manufacturers & Commerce joined the fight by threatening a lawsuit against Laketown, one of the communities that recently passed an ordinance on CAFO regulations. The business group’s legal arm sent a letter on behalf of seven residents that claim Laketown’s ordinance "contains at least 16 provisions that are preempted by state laws and illegal."

Laketown Board Chair Dan King said he’s not surprised to see the threat of a legal challenge. He said a committee spent years reviewing state law and developing an ordinance.

King said DATCP has very specific guidance for how local governments can regulate CAFO siting, but the town felt they had more leeway by focusing an ordinance on farm operations.

"That's where the argument between the two sides come in, whether this is actually a modification of a siting ordinance or if it will stand alone as an operations ordinance," he said.

King said the town is waiting to see what happens next with both the legal challenge and a possible review from DATCP. He said it’s a complicated issue for the community.

Don Anderson, chair of the Eureka Town Board, said his community has not received a similar challenge but he's not concerned about facing one.

"Our ordinance was done with a lot of scientific information from experts, written by lawyers. I'm quite confident that it'll stand," he said.

Anderson said the ordinance is focused on protecting groundwater, air quality and public health, areas that could be affected by the manure generated on a CAFO.

"I believe it's up to our local governments to take some steps to protect the residents. And that's what we're attempting to do," he said.

Andrew Marshall is an attorney with Bassford Remele Law Firm in Minneapolis who worked with the Town of Trade Lake to develop their ordinance, which he said took two years of meeting with experts and reviewing information. Marshall said the ordinance focuses on environmental and public health concerns because of the area’s dependency on its natural beauty to draw in residents and visitors.

"This area of Wisconsin has a very significant percentage of revenues derived from recreational activities, from snowmobiling, from boating, from people with summer cabins, and people come here to fish. So that type of revenue can be significantly affected if there are all of a sudden 12 CAFOs in the county," he said.

Marshall said he believes the towns are willing to work with local farmers to make the ordinances work for them. But he said local officials aren’t interested in repealing the rules because of what he calls a "groundswell of concern" from residents.