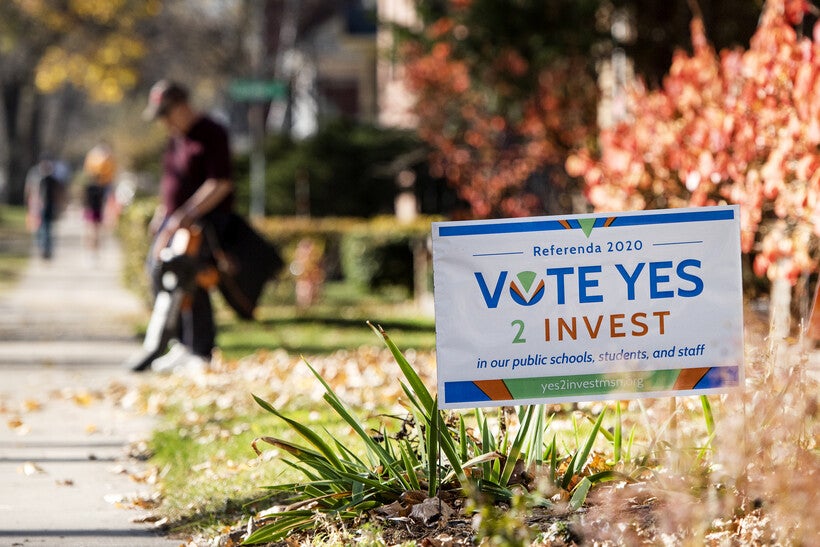 3.3 Percent Increase Is Second-Largest In A Decade, Spurred By Higher State Limits
By Madeline Fox
Share:

A new report from the Wisconsin Policy Forum shows property taxes levied by schools in Wisconsin will go up 3.3 percent in 2020, the second-largest increase over the past decade, after 2019. The increase follows another year of successful school funding referendums around the state.

Ari Brown, the data and research analyst with Wisconsin Policy Forum who created the report, said the reason Wisconsin saw substantial increases this year and last year comes down to Wisconsin's increases in per-pupil revenue limits. The Legislature sets a cap on how much money per student a school district can bring in through a combination of property taxes and general state aid funds. For most of the 2010s, that per-pupil limit increased only slightly or not at all or decreased.

"When one of those two things increases, the other has to decrease, unless the per-pupil revenue limit increases," said Brown. "In the budget that was passed last year by the state, there were increases in the revenue limit, which meant that property taxes can grow as part of that formula." 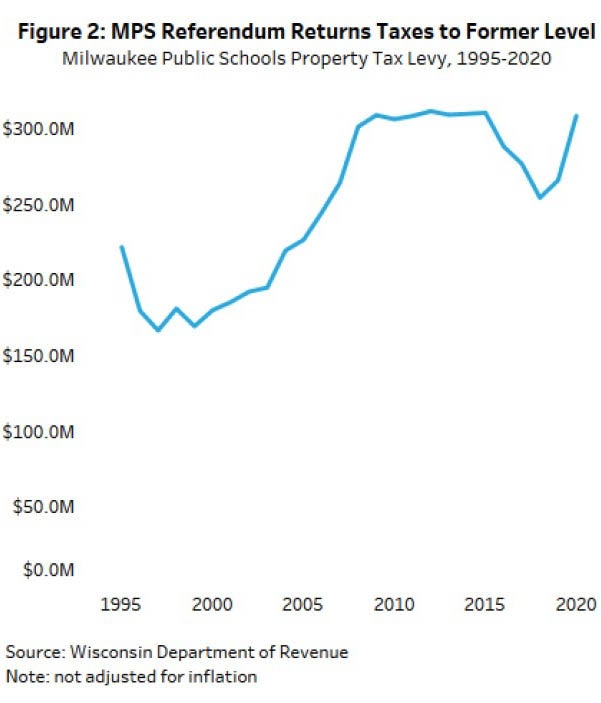 However, though this year's increase is significant, it comes in the context of a more mixed history of school property taxes over the past decade.

Milwaukee Public Schools (MPS), which passed its first funding referendum in more than 30 years in April, accounts for a large share of the 2020 increase — property owners in Milwaukee will see their tax bills go up by 16 percent to bring in $308 million. Although the more than $40 million jump in Milwaukee from 2019 to 2020 is sizable, it still doesn't catch the city up to its 2012 property tax rate which brought in $311 million, because Milwaukee saw its levy drop substantially between 2012 and 2015.

Brown also noted MPS's referendum was "front-loaded," meaning that of the $81 million increase to be phased in over the next several years, $57 million comes in this first year. Later years will see a smaller dollar and percentage jump.

"It's very unlikely we'll see anything like this in upcoming years (in Milwaukee)," he said. "It really is, mostly, just a one-time thing."

The Racine Unified School District, by contrast, passed a massive $1 billion, 30-year referendum this year by a mere five votes, but isn't front-loaded in the same way. It's only going up by $18 million until 2025, then increasing steadily through 2050.

"They (Racine) had a 7.3  percent increase, so it's not totally out of the norm," said Brown. "And unlike Milwaukee, Racine's property tax levy has been increasing pretty steadily since the 1990s."

The increases, part of a larger trend of school funding referendums passing over the last several years, comes as schools in Wisconsin and around the country are facing significant financial uncertainty.

Wisconsin saw a significant overall drop in school enrollment this year, largely because of drops in the non-mandatory pre-Kindergarten and Kindergarten grades, and a huge drop in summer school enrollment. Both school year and summer enrollment numbers are rolled into the formula that helps calculate how much money schools get, and unless the Legislature makes an exception, school districts that saw fewer students enroll could see their funding reduced over the next several years. At the same time, the state aid money that fills in half of the per-pupil funding formula could drop if the economic effects of the coronavirus pandemic lead to cuts in the state budget.

"We really don't know, more so than maybe any year in recent memory, what these upcoming budget deliberations are going to look like," said Brown. "There's so many variables here, but so much of this is going to come down to: What do those per-pupil revenue limit increases look like in the next budget?"

Property tax bills get mailed to homeowners across Wisconsin this month and are the single largest tax paid by residents. Property taxes are also the largest source of funding for schools and other units of local government, including police and fire departments. The actual increase for each homeowner will vary depending on where they live.

Editor's note: An earlier version of this story misidentified 2019's 4.5 percent increase in school property taxes as the record. It was the highest increase since 2009.