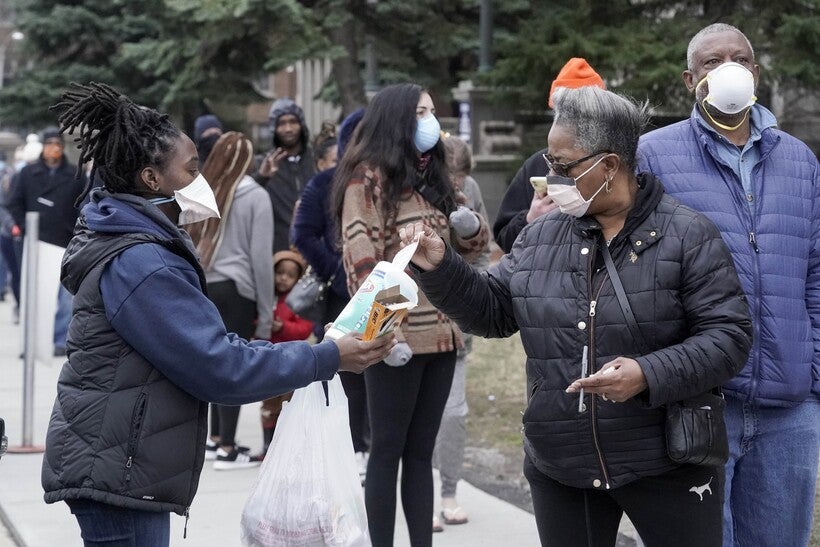 A worker hands out disinfectant wipes and pens as voters line up outside Riverside High School for Wisconsin's primary election Tuesday April 7, 2020, in Milwaukee. The new coronavirus causes mild or moderate symptoms for most people, but for some, especially older adults and people with existing health problems, it can cause more severe illness or death. Morry Gash/AP Photo

According to an analysis by the Wisconsin Policy Forum, the approval rate and dollar amount of referendums approved last month trailed only 2018. Of the 60 funding requests put to voters, 52 were confirmed.

Another 25 of the money requests were for issuing debt to cover new buildings or other construction projects. 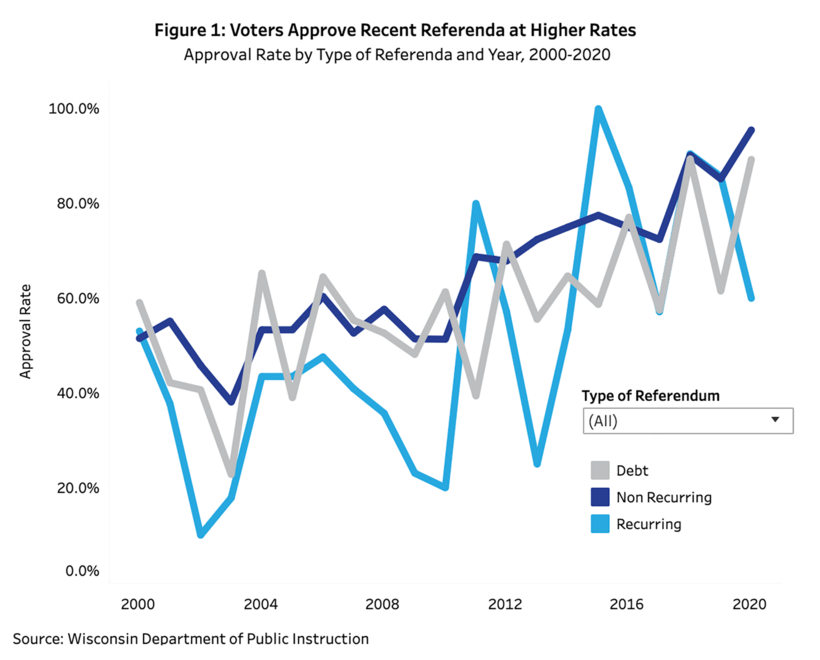 Graph courtesy of the Wisconsin Department of Public Instruction

Racine’s record-breaking referendum, which passed by just five votes, was a combination of the two — funding for new buildings and building modernization as well as enhancements in student programming. It was also a bit of an outlier.

Ashley Fisher of the Wisconsin Policy Forum said it’s more typical for non-recurring referendums to time out at about five years, while Racine’s authority to collect taxes under the referendum passed in April extends over 30 years.

Four voters contested the results of Racine’s narrow-margin referendum, triggering a recount that took about 20 masked volunteers and staffers six days of counting from 8:30 a.m. to 5 p.m. In order to keep appropriate social distance, questionable ballots were put up on a projector for more people to get a good look.

"They really want to be up really close and see the ballots and look at them, and that’s a little bit difficult when you’re trying to social distance," she said.

Those who petitioned for a recount can now file an appeal of the results — which confirmed the original count — with the circuit court. Tapp said they’re expecting an appeal, which has to be filed by the end of the day Friday.

School districts in Wisconsin have increasingly turned to referendums to fund school projects and operations. Taking their pleas for funding directly to voters allows school districts to raise their state-imposed caps on school spending, especially as their main sources of revenue haven’t kept up with inflation.

According to the Policy Forum report, between the 2009-10 and 2018-19 school years, inflation rose 17 percent, while the statewide average revenue limit per pupil for districts only increased by 6 percent. Additional funding from the state in per-pupil aid closed some of that gap, but not all of it.

"If you talk to school district people, they’ll tell you they feel like they’re just about getting back up to inflationary levels after a big cut in per-pupil revenues in 2011-12," said Anne Chapman of the Wisconsin Policy Forum. "And now we’re headed into not just a recession, but the impact of COVID on its own."

She noted that the virus has meant additional unexpected spending for school districts.

In the immediate term, school districts are providing meals and remote learning in unanticipated ways, which have also required pouring additional resources into deep cleaning and hazard pay for employees passing out technology or dropping it off door-to-door to district families. As students start coming back to schools, it’s likely they’ll need to pay more in training for teachers and new technology as they adapt to the new normal.

At the same time, state revenues are likely to come down as the economy slows and stalls, meaning the state will have a tighter budget.

"When you look at K-12 education being the largest category of funding for state money, it’s hard to imagine that the state isn’t going to have to cut back some on K-12 to balance its own budget," Chapman said.

The federal CARES Act, as well as other legislation under consideration at the national level, is funneling money into state governments and schools, though Chapman said it remains to be seen how much this will be able to make up for the twin forces of higher costs and lower revenues in Wisconsin.

"Right now, school districts are saying that that’s a good start, but it won’t be enough to help them weather the ongoing storm," Chapman said.

Editor's note: This story has been updated to reflect that voters approved 21 non-recurring referendums for operations.