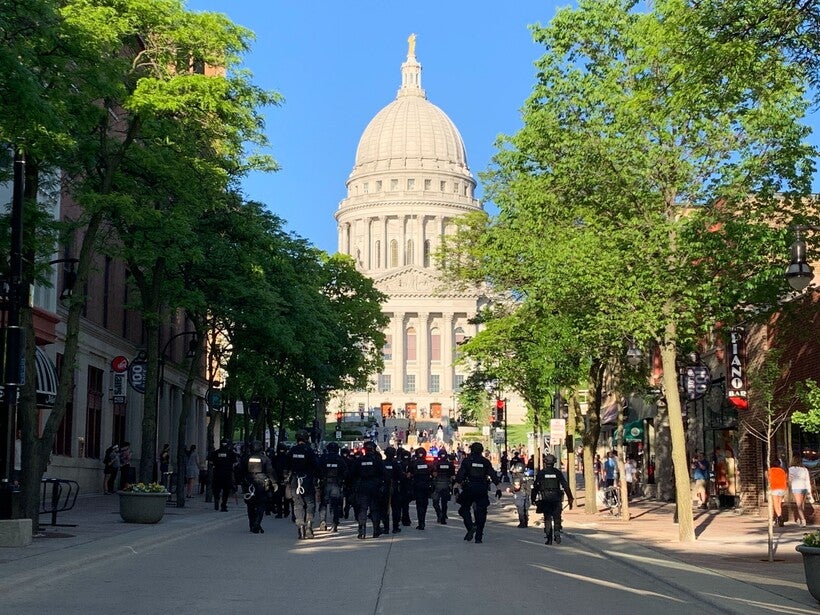 Republican leaders of the state Legislature remained silent on Thursday about the prospect of a special session to take up bills related to police policies and training, despite a high-profile call-out by the Milwaukee Bucks and protests staged by other Wisconsin sports teams and activists across the state.

After the Bucks refused to take the court in a crucial playoff game yesterday, the team issued a statement calling on the state Legislature to reconvene after "months of inaction" to take up bills related to police accountability and criminal justice reform.

The Milwaukee Brewers and Green Bay Packers followed with similar moves on Wednesday and Thursday in response to the shooting of Jacob Blake by Kenosha police. Protesters and activists have also been marching and rallying since Sunday in Kenosha, Madison and across the state, calling for policy changes.

The GOP leaders of the state Assembly and Senate haven’t publicly commented on the Bucks’ call and didn’t return requests for comment today.

The Legislature was last in session in mid-April, when lawmakers met virtually to approve a bill responding to the COVID-19 pandemic in Wisconsin. Prior to that, the Assembly adjourned for the year in February. An expected return of the Senate this spring to conclude its business for the year was derailed by the pandemic.

Earlier this week, Gov. Tony Evers called a special session of the Legislature for next Monday, asking lawmakers to take up the nine bills related to bill policies and training he proposed in June.

Speaking at a Capitol press conference in late June, Vos said it’s important for lawmakers to take their time "to see what the answers are."

"And I also think that we need to have real actions," Vos said at the time. "It’s not just about changing the names of Eskimo pies and all these things that seem like they’re just virtue signaling."

Evers has said he doesn’t expect Republicans to debate or vote on any bills next week. They may choose to convene and immediately adjourn the special session, as they did for the governor’s special session on gun policy last November.

Meanwhile, Democrats have been sharply critical of the GOP for not responding to calls to take action.

"I am ready to reconvene and take meaningful action. I hope @SenFitzgerald and @SpeakerVos are willing to do the same," Senate Minority Leader Janet Bewley, D-Mason, tweeted on Thursday. "The time to act is now."