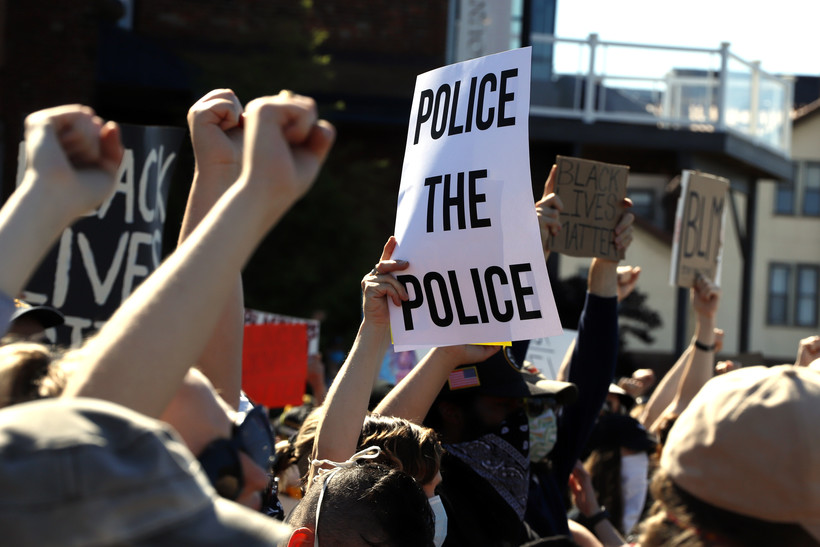 In this June 7, 2020, file photo, protesters participate in a Black Lives Matter rally on Mount Washington overlooking downtown Pittsburgh, to protest the death of George Floyd, who died after being restrained by Minneapolis police officers on May 25. Gene J. Puskar/AP Photo

Legislation Would Establish Statewide Use Of Force Standards
By Danielle Kaeding
Share:

Gov. Tony Evers and Lt. Gov. Mandela Barnes announced a package of nine bills on Friday targeting accountability and transparency among police in Wisconsin. The legislative package includes proposals that bar the use of chokeholds and no-knock warrants, as well as require annual training on de-escalation techniques.

The package also includes bills that would establish statewide standards on use of force and require potential officer candidates to allow their previous employer to disclose their work history.

Rep. David Bowen, D-Milwaukee, a member of the Legislature's Black Legislative Caucus, said they've requested the governor call a special session on the measures, but Evers has stopped short of doing so yet.

"The goal is to pass bills, and we need our Republican colleagues to get on board and come to the table," said Bowen.

"And, at this critical moment, I don't think it's a good idea to have them deliver another slap in the face to so many people who are calling for justice," said Barnes.

In a letter to the Legislative Black Caucus, Evers implied Republican leaders would likely "gavel in and gavel out" without taking up any measures as they have in past instances when he's called special sessions. The Legislature is not scheduled to meet again this year.

The legislative package comes as the state and nation recognize Juneteenth on Friday, celebrating an end to Slavery in the United States. The announcement also comes amid weeks of protests following the death of George Floyd, a Black man, in police custody on Memorial Day in Minneapolis.

Now-fired white officer Derek Chauvin kneeled on Floyd's neck for nearly nine minutes while three other officers failed to intervene. Chauvin is facing murder charges while the other officers are charged with aiding and abetting Floyd's murder.

"Our country promises the opportunity of justice and equity, and it’s time for us to deliver on that promise," said Evers in a press release. "We know we don’t have all of the answers — no one does. This legislation is a first step toward dismantling the systems we’ve created, but it can only be a first step."

Evers acknowledged it will take more than legislation to end systemic racism in a call to action to prevent further acts of violence.

Wisconsin is one of the worst states in the nation for racial inequality, according to the Center on Wisconsin Strategy. In a 2019 report, the center found a growing racial divide and fewer opportunities and outcomes for Black residents over the last 40 years. The state has among the worst rates in the nation of infant mortality, child poverty and incarceration rates for Black children and adults.

Black residents also make up around 18 percent of COVID-19 cases in the state and 24 percent of known deaths from the virus despite representing roughly 6 percent of the state's population.

"We continue to lose far too many Black lives, be it from inequities in criminal justice and policing, in health care, or in economic well-being," said Barnes in a statement. "The social and economic consequences of these deep-seated inequities reach every community in our state and eliminating them will require action at every level of government. Passing these bills is one piece of how we move closer to accountability, equity, and justice for all."

Jim Palmer, executive director of the Wisconsin Professional Police Association, said the reforms proposed are measures they have long supported or are already well-represented among Wisconsin law enforcement agencies.

"With regard to the training and some of the other measures that the bill provides for, we believe most agencies largely comply with those standards already,” said Palmer. “But, we think having a uniform standard makes a lot of sense. It's good for public safety, and it's good for maintaining and promoting the public trust that officers need to do their jobs.”

Palmer added that chokeholds are not taught in Wisconsin's law enforcement curriculum and officers are instructed to avoid using chokeholds.

"But, it's also true that they're not prohibited," he said. "And so for that reason, a measure like that is not one that we would oppose. We would support that."

However, Palmer said he would prefer to see changes to the proposal barring no-knock warrants, noting they're rarely used and can improve public safety when used correctly.

Barnes said he's open to discussing changes to see what makes the most sense based on the evidence.

"But, you look at situations like Breonna Taylor in Kentucky, and then it's tough to make that argument," said Barnes.

Taylor was a Louisville EMT who was shot and killed in her home by police after they executed a no-knock warrant more than earlier this year. Palmer said the warrant issued in that case didn't meet the legal standards established for their use. Palmer added the officers who served the warrant weren't properly trained.

Republican Sen. Van Wanggaard, who chairs the Senate Judiciary and Public Safety Committee, said he has co-sponsored some of the bills put forward by Evers in the past.

"Those bills enhance public confidence in the police and codify existing practice, while preserving public safety and the safety of officers. For the same reason, I have adamantly opposed some of these bills because they perpetuate false impressions of law enforcement and jeopardize the safety of officers and the public,” said Wanggaard in a statement.

Wanggaard said he would evaluate the legislation and all proposed reforms based on the safety of all citizens moving forward, regardless of their race, color or creed.

"This is an unprecedented moment for us to step up and really let folks know that care about these issues, that want to see equity, that want to see Black folks not losing their lives in police encounters, that we can change this," he said.

Aids for Assembly Speaker Robin Vos and Senate Majority Leader Scott Fitzgerald did not immediately respond to requests for comment on Friday.

The package of bills includes: