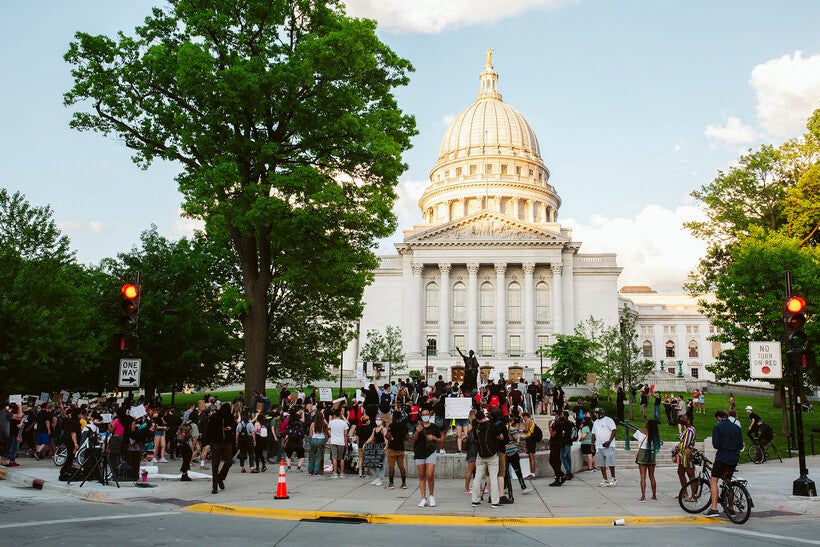 Demonstrators gather at the Wisconsin state Capitol in Madison, Wis. on June 3, 2020, to speak out against police violence and celebrate black culture. Keni Rosales/WPR

Black Lives Matter protesters have been marching in communities across Wisconsin for more than a month, calling for changes to the state’s criminal justice system and other measures to curb years of systemic racism.

Several local governments have already answered protesters’ calls, doing things like removing police officers from schools and vowing to review police use of force policies. State government, however, is a different story — action there has been practically nonexistent.

For some, the delay at the state Capitol reinforces the idea that politics rarely acknowledges or serves them.

At a June 1 protest about a mile from the Capitol Square in Madison, a young protester spoke of that frustration to a crowd of hundreds.

"Mayors, governors, everybody, we done talked to them," he said. "And they promised us so much."

The speaker, who said he was a recent graduate of Madison West High School, said he had been marching in protests and attending community meetings since 2015, when Black teenager Tony Robinson was killed by a Madison police officer. 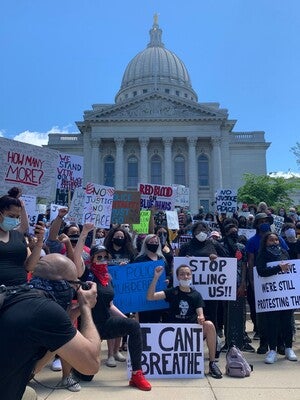 A gathering calling for justice in George Floyd's death took place Saturday, May 30, 2020 at the Wisconsin state Capitol. Attendees demanded justice for Floyd and others who have been killed by police officers, including Breonna Taylor, Tony McDade, Sean Reed, and Madison's Tony Robinson. Bridgit Bowden/WPR

"We had somebody sit in our face (then) and tell us what they was gon' do, but they did nothing," he said.

The crowd roared with approval.

Myers, a former teacher who was first elected to the state Assembly in 2018, said she expects the Legislature will act — at some point — on changes to state law related to criminal justice and Wisconsin’s well-documented racial disparities.

"One thing I will say is that I do believe that this particular iteration of the civil rights movement, because that’s exactly what it is, will be different," she said. "We know what the issues are, we’ve studied long enough. There’s always a time to study, but there always comes a day when there’s a test. I think we are at the testing point. This is where we figure out where we want to be as a state."

Myers and the Black caucus sent a letter to Gov. Tony Evers in early June, asking him to call a special session of the Legislature in response to the Black Lives Matter movement. The governor has yet to do so.

Lt. Gov. Mandela Barnes said Evers hasn’t taken the step because the GOP-controlled Legislature could gavel in and out of the session without taking any action, like they did for a special session on gun laws last year.

"At this critical moment, I don’t think it’s a good idea to have (Republicans) deliver another slap in the face to so many people who are calling for justice," Barnes said in an interview with WPR last month.

Republican Assembly Speaker Robin Vos, R-Rochester, has said there’s no reason to "rush" into a legislative session. Speaking at a Capitol press conference in late June, he said it’s more realistic for lawmakers to "take the time to see what the answers are."

"And I also think that we need to have real actions," Vos said. "It’s not just about changing the names of Eskimo pies and all these things that seem like they’re just virtue signaling."

On June 19, Evers unveiled several suggested legislative proposals in response to the protest movement. They included bills to set statewide use of force standards for police, to bar police from using chokeholds and no-knock warrants, and to create a $1 million state grant program for community-based anti-violence and conflict mediation programs.

In a press release at the time, the governor said state lawmakers don’t need to know "all the answers" in order to take the first few steps to respond to the state and national conversation about policing and racism.

However, Vos called the governor’s action disingenuous, because Evers never consulted with the GOP lawmakers who control the Assembly and Senate before releasing the proposals.

"It wasn’t a time for partisan politics," Vos said. "It’s a time for people of good will to sit down and say, 'Where can we find that common ground?'"

Vos has made similar criticisms when Evers debuted proposals related to gun violence, elections and the state’s struggling dairy industry.

When pressed on some of the governor’s specific proposals, Vos said he believes there is at least some Republican support for banning police use of chokeholds, which many law enforcement officials say are rarely used. The speaker also said he supports looking at police training requirements, but warned against going too far.

"The vast majority of people in this state know the police have a really difficult job and that they should be held to a higher standard, but they also are human beings and make mistakes," he said.

Vos said other proposals related to poverty and education may be considered in an eventual, Republican-backed package of bills responding to the protest movement. He said GOP lawmakers have been meeting with constituents across the state and have sometimes marched in protests to show their support. He said it is unlikely, however, any votes would happen before the end of the year.

"Sometimes politics is slow, but it also is deliberate and that’s how we get things right," he said.

Senate Majority Leader Scott Fitzgerald, R-Juneau, didn’t respond to multiple requests for comment about the status of conversations, negotiations or proposals in the state Senate, or his support for them.

Meanwhile, Myers said she and other members of the Black caucus are working through the summer on possible bills, with hopes they will be unveiled early in 2021, at the start of the next legislative session.

"Being a realist, I think that’s where we are," she said of that timeline.

Myers said several of the governor’s proposals are under consideration. She also mentioned bills may be in the works to do things like encourage the state to hire more minority-owned businesses to do state contract work and to create a statewide system, run by the Department of Justice, to document police officer misconduct.

She also mentioned other proposals that have traditionally been non-starters with the GOP-controlled Legislature: expanding public transportation and accepting a federal expansion of Medicaid.

In a possible preview of the debate to come, at the June press conference, Vos mentioned the state’s expansion of voucher schools and investment in job training programs as efforts to support the state’s Black community in recent years. But Myers pushed back on both of those points. She said state-backed job training programs need more concrete data on resulting job placements and that the voucher expansion hasn’t led to better testing scores for Black students.

"We’ll do things to throw something at the problem, but we never fix the actual problem," she said. "Tangible results are what Black people are looking for, and what people of color are looking for."

Myers said, as of early July, she had had one meeting with Vos about state proposals.

As those talks continue, she said she and other Black caucus members are focusing much of their attention this summer on local government changes, as city councils and county boards across the state continue to hold public meetings and take votes on changes.

"I think the more immediate impact can happen, in this particular movement, at the county and municipal level," Myers said.

While those changes continue, the state proposals will remain behind the scenes at a mostly empty Capitol building — at least for now.