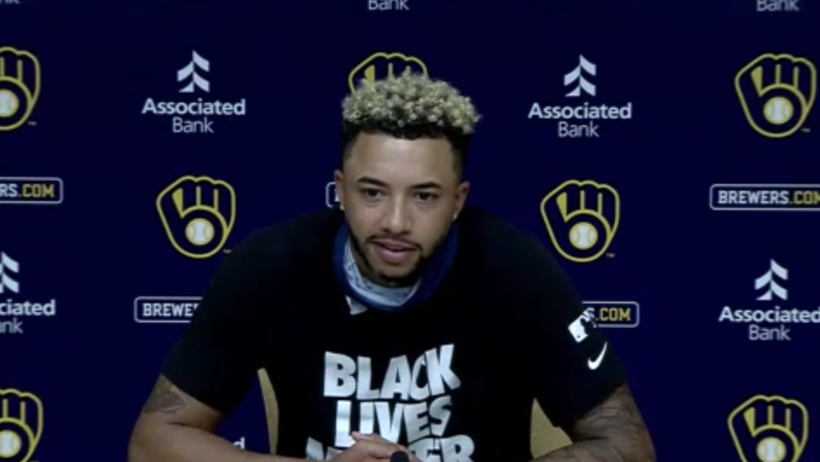 Devin Williams of the Milwaukee Brewers addresses the media before a game on Aug. 27, 2020. Megan Hart/WPR

Wisconsin Athletes Won't Be Told To Stick To Sports

Wednesday's Move By The Bucks Shook The Sports World
By Megan Hart
Share:

For years, athletes were told to stick to sports. Of course, they didn’t always listen, and now their voices are becoming harder to ignore.

Before NBA players agreed to finish out the season in a coronavirus bubble, they demanded the league provide ways to continue their social justice fight, even while sequestered in Orlando, Florida.

But on Monday, George Hill of the Milwaukee Bucks said it didn’t feel like there was anything he could do in response to the police shooting of Jacob Blake, a 29-year-old Black man, in Kenosha.

By Wednesday, the Bucks found a way to make a social justice statement, starting a domino effect in the sports world: The team refused to leave the locker room for game five of its first-round playoff series against the Orlando Magic.

According to reporters inside the bubble, the Bucks' decision sparked hours of discussion among players across the league — who voted Thursday morning to finish out the season. Games are expected to resume Friday.

On Wednesday, the Milwaukee Brewers and several other baseball teams also opted to skip their games in protest of racial injustice. Brewers players voted unanimously in favor of the decision, according to a team official.

Brewers reliever Devin Williams, who is Black, said on Thursday that the protest wasn’t his idea, but it meant a lot to him. When asked about his own experience, Williams said he’s been subject to racism and bigotry so frequently the instances just blend together.

The Green Bay Packers announced Thursday their practice would be postponed. Instead of taking the field, the team will host an afternoon screening of the film 13th, about how the amendment that abolished slavery paved the way for mass incarceration.

Some things are bigger than football, head coach Matt LaFleur told reporters Thursday. The players want to play football, but they also want to address the issue of racism, he said.

"I think there are some things that we can do in the short term to continue to bring light to some of these issues," he said.

I’m not here solely your entertainment.. I’m a Black Man. No I won’t shut up when it comes to my community and the problems we face as a whole.. if that bothers you . Then don’t watch me don’t follow me don’t support me.. if you are not here to help then leave. I will be ok

"I think LeBron James deserves a Nobel Prize for standing up in the Trayvon (Martin) case in Miami, standing up and building a school in Ohio, for Breonna Taylor," he said. "He’s changed the culture of athletes in America today."

Basketball legend Kareem Abdul-Jabbar, a former Bucks player who was awarded the Presidential Medal of Freedom for his own activism, praised James in an interview with WPR earlier this year. He said it’s more common these days for NBA players to stand up for their beliefs.

"Each of them has their own take on what is a crucial need, but the ones who see a need are doing something, and they're using the incredible wealth that they are getting in very positive ways," he said.