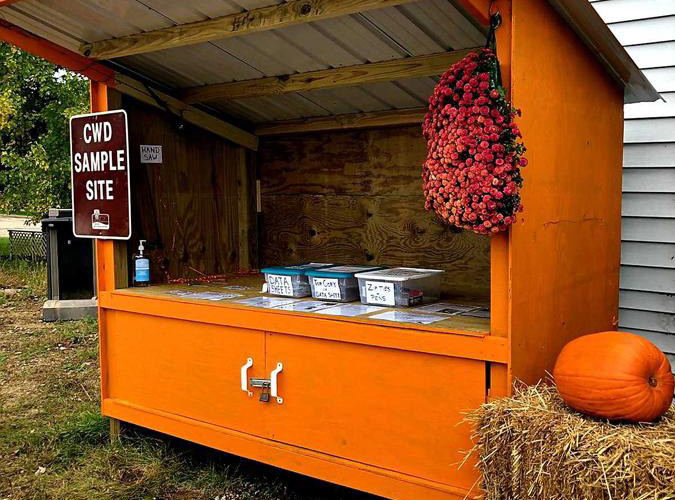 The Wisconsin Department of Natural Resources is wrapping up its multi-year effort to conduct heightened monitoring of chronic wasting disease this fall as the fatal deer disease continues to spread across the state.

The agency is asking deer hunters to help track the disease across 13 counties in northeastern Wisconsin and other surveillance areas, completing an enhanced monitoring effort that began in 2018.

"Every test result that we get out there, it helps us better understand the distribution of CWD in the state," said Amanda Kamps, the DNR's wildlife health conservation specialist.

The DNR is projecting it might collect 21,000 samples statewide this year, but Kamps cautioned the total number collected depends upon interest from hunters. The agency hopes to collect 300 samples in each of the 13 counties under enhanced surveillance in northeastern Wisconsin. Those counties include Brown, Calumet, Door, Green Lake, Fond du Lac, Kewaunee, Manitowoc, Marinette, Oconto, Outagamie, Waupaca, Waushara and Winnebago.

First detected near Mount Horeb in 2002, CWD has spread throughout the state and is now known to exist in more than 30 counties. The disease attacks the brains of deer and other animals, causing drastic weight loss and death over time. At least 58 counties are now affected by CWD, meaning the disease has either been detected nearby or within the county.

"The reality is over the past year, we've had new occurrences of wild occurrence of CWD in four counties across the state, (and) a few additional counties that have had their first positives in captive cervids as well," said Jeff Pritzl, the DNR’s statewide deer program specialist.

In the last year, deer at farms in Outagamie, Langlade, Sauk and Taylor counties have tested positive for the disease.

Last year, the DNR collected a total of 18,896 samples in wild deer and roughly 8 percent — or 1,578 samples — tested positive for CWD across 23 counties. The agency cautions against using that percentage as an indicator of prevalence statewide due to different volumes of sampling in certain parts of the state. The vast majority of deer that tested positive for CWD were sampled in southern Wisconsin, including Iowa, Dane, Richland and Sauk counties.

Kamps urged deer hunters to take part in CWD testing to help track the spread of the disease. Hunters can submit deer heads for testing anytime at self-service kiosks across the state. Meat processors and other businesses are also aiding with collection efforts, and the DNR is making at-home testing kits available.

Sampling results usually take about 10 days to two weeks. Last year, the average turn-around time for results was nine days, and the agency isn’t expecting any delays due to the COVID-19 pandemic.

The DNR is also conducting CWD sampling in other surveillance areas across the state where wild or farm-raised deer have tested positive across southern and central Wisconsin, as well as pockets in northern Wisconsin.

DNR Secretary Preston Cole has said the agency is focusing on research rather than regulation to combat the spread of the disease. Former Republican Gov. Scott Walker proposed emergency rules that would’ve included the double-fencing of deer farms. Multiple counties and conservation groups supported the move, but the proposals drew pushback from the deer farm industry and some Republican lawmakers.

Pritzl said the agency has to weigh what the DNR can accomplish through regulation and support from hunters to combat the spread of CWD.

"The movement we've seen as an example, I think, over the last couple of years, in lifting the awareness of proper carcass disposal…is a big step forward," said Pritzl.

Pritzl said "buying time" through sampling and monitoring transmission is important in preventing further spread of the disease until the state sees advances in treatment or more efficient testing options for CWD.

"So that a hunter landowner has better information to know what their likelihood is of encountering CWD in deer that they might harvest, as well as being able to detect trends and whether CWD prevalence is going up or down," said Tom Hauge, a former DNR wildlife biologist and co-chair of the wildlife working group for Wisconsin's Green Fire. "And, at least in Wisconsin, all of the trend lines are upward."

Hauge acknowledged the DNR has limited staff and resources to coordinate those efforts. Still, he highlighted Dane and Iowa counties have seen the prevalence of CWD in adult bucks increase since 2002 with some areas seeing prevalence as high as 50 percent while only 20 percent of harvested deer are being tested. He said increasing the number of kiosks and convenient access to CWD sampling stations may help increase sampling.

The conservation group is also recommending the agency overhaul its CWD response plan and incorporate results from a four-year study of whitetail deer in southern Wisconsin. The DNR said that data is not yet available, but the agency is currently in the midst of its second five-year review of that 15-year plan. The agency plans to hold a series of public meetings before bringing that plan to the Natural Resources Board early next year.

More than 265,000 samples have been collected from deer statewide since 2002, and almost 8,200 deer have tested positive for the disease.