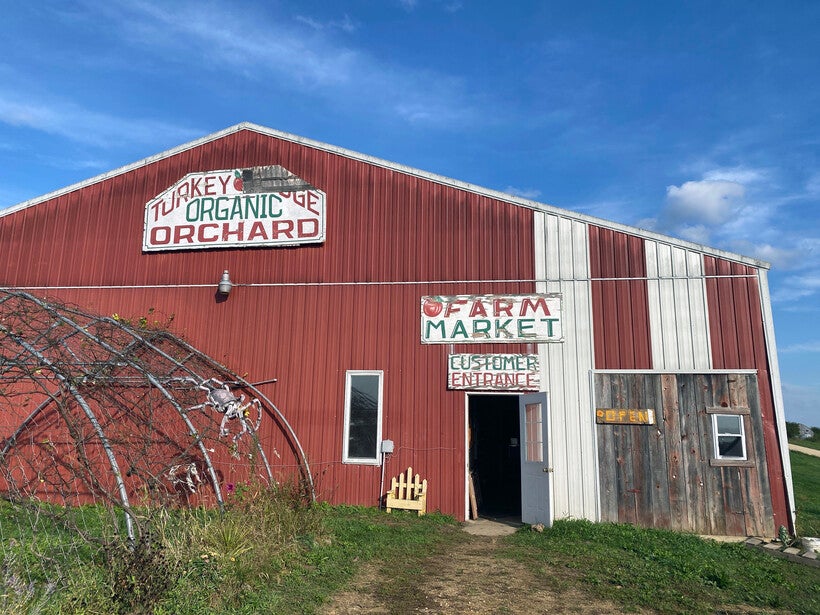 Turkey Ridge Organic Orchard is an apple orchard in Gays Mills, Wis. The farm and orchard has more than 30 acres and is nestled in the rolling hills of the Kickapoo River Valley. Diane Bezucha/WPR

Many growers point to climate change to explain the low harvest
By Diane Bezucha
Share:

On a sunny Saturday in October, the air at Turkey Ridge Organic Orchard in Gays Mills is as crisp as the apples they grow. The door to their farm store stands open, inviting customers in to browse.

But inside, it is eerily empty. Dusty shelves are scattered with a few stray jars of honey, jam and apple cider vinegar. A sign by the cash register says "self serve." 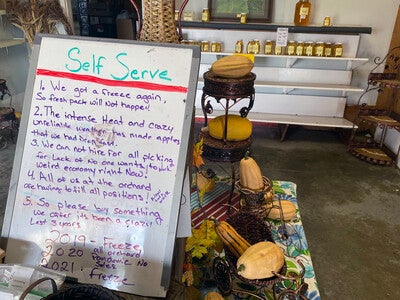 A sign at the Turkey Ridge Organic Orchard in Gays Mills, Wis. tells customers to help themselves. After three years of low harvests and pandemic-related labor shortages, the apple orchard has struggled to get by, moving most of their business to the Village Greenhouse they opened in town. Diane Bezucha/WPR

The 30-acre apple orchard is tucked into the rolling hills of the Kickapoo River Valley, some of the most fertile land in the state. It seems harvest season should be bustling, but it’s been three bad years for Turkey Ridge, said owner Faye Welsh.

In 2019, a late spring freeze took out their entire crop. And 2020 brought a great crop that should have offset the previous year’s losses, but business plummeted because of the coronavirus pandemic. This year, it was a double-whammy. A spring freeze hit their early varieties, cutting the harvest in half. Then heat and heavy rain made their late varieties drop too soon and they couldn’t find enough workers to pick them.

She said they’ve survived by holding fundraisers and opening up a side business, the Village Greenhouse, to cover the basic bills for both businesses.

"It's sad because you take three years in a row — a hit that should push most farmers down," said Welsh. "We’re shocked that we’re still here."

While Turkey Ridge’s case is extreme, they’re not alone. Apple orchards across the state are experiencing unusually low harvests this year.

"The best that I’ve heard is 50 percent of a normal crop, and I’ve heard all the way down to zero — that some orchards have zero apples this year," said Anna Maenner, executive director of the Wisconsin Apple Growers Association.

The average harvest across the state this fall is 30 to 40 percent of a typical harvest, said Maenner.

While 2020 was a bumper crop, which can sometimes mean less productivity the following year, growers said the main reason for the low harvest this year was the weather — extreme droughts, followed by late spring frosts. And many of the orchards that made it through spring unscathed were hit by severe hail storms over the summer. 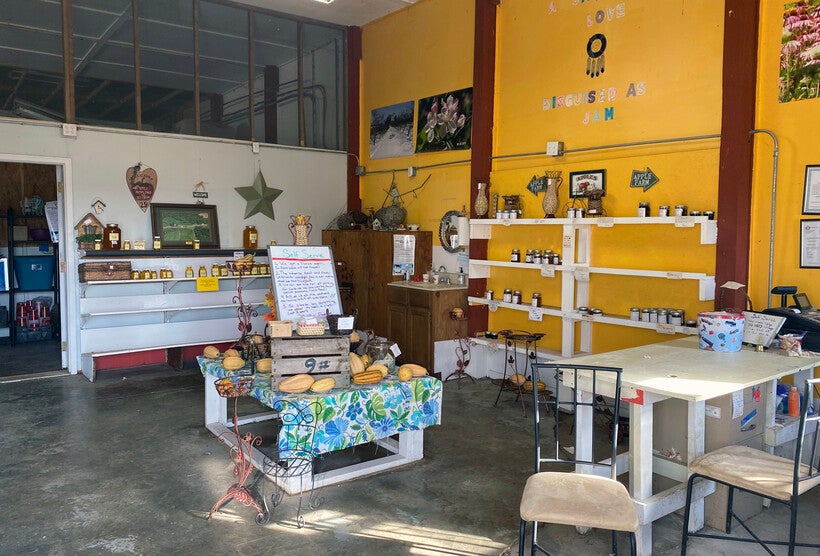 "It was kind of one thing after another," said Maenner. "All of those things combined have been very challenging for orchardists this year because it’s nothing they have control over."

These big hits can be hard on smaller orchards like Turkey Ridge. According to the Wisconsin Apple Growers Association, 80 to 90 percent of the state’s apple orchards are smaller farms — 20 acres or less — that rely on pick-your-own operations and on-site retail rather than wholesale. When they’re out of apples, they close for the season. Wisconsin orchards are typically open through Thanksgiving, but this year, Maenner said, many are closing by Halloween.

'Normal weather, we don’t seem to get it anymore'

Sometimes larger, more productive orchards can sell their excess apples to those that had a smaller crop to keep business going longer for everyone. But even the state’s larger orchards are feeling the squeeze this year.

"We’ve got some blocks that in 20 years we’ve never missed a crop on and they’re way down," said Steve Louis, owner of Oakwood Fruit Farm in Richland Center and president of the Wisconsin Apple Growers Association.

Louis’s 117-year-old farm is one of Wisconsin’s oldest and largest orchards. Most of its apples wind up in grocery stores across the state. Louis said their 50 percent harvest was considered a good crop for this year.

As with other orchards, Louis said the culprit was frost. And he’s seen more frequent late-spring frost events in the past five to 10 years.

"These kinds of abnormal weather events seem to be getting more and more all the time," said Louis. "Normal weather, we don’t seem to get it anymore."

It’s not unusual for an orchard to be hit by frost, but Maenner said it’s typically just one city or region that is affected.

"The thing that is different this year is that it’s pretty widespread all over the state," said Maenner.

For many growers and researchers, this points to one thing.

"That is definitely the expression of climate change," said Professor Amaya Atucha, a fruit crop specialist at the University of Wisconsin-Madison.

She said increasingly extreme variability in temperature and precipitation is making it difficult for fruit trees to thrive.

As a perennial crop, apple trees are used to a degree of variation each year, said Atucha. The buds for next year’s apples are forming now and are equipped to survive the Wisconsin winter before blossoming in the spring. But more extreme winter temperatures have been adding additional stress to developing buds.

On top of that, unseasonably warm weather has been luring trees out of dormancy too early. Wisconsin apple trees typically "break bud" in mid-May, but lately Louis has been noticing them emerge as early as March and April. That soon in the season, especially after a difficult winter, the new blossoms are more susceptible to environmental stress like frost.

"If we get cold snaps in late April or May, then we’re in trouble," said Louis. "If the genie’s out of the bottle, there’s nothing you can do. They’re done." 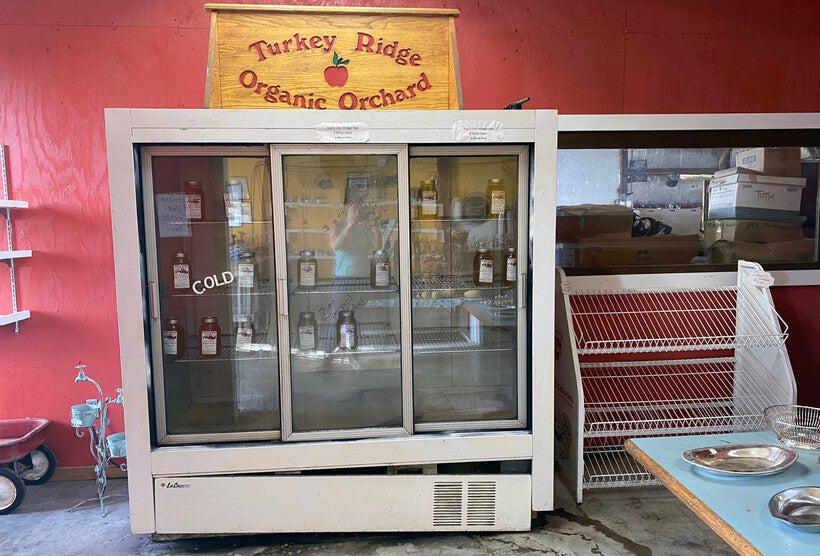 And for the apples that do manage to survive, the challenges continue. Growers said they dealt with severe drought, intense bursts of rain and hail storms this summer.

"All of that is brutal for the plants that have to survive that," said Atucha. "And we’re getting more of it."

So apple growers are trying to adapt.

'We’re not bailing out'

Some orchards already use irrigation systems and hail netting to counteract mother nature. But these options can be costly and out of reach for smaller farms.

To combat the cold snaps, some farms use fires and wind machines to warm the air around the trees, but the technique only works if you just need to nudge the temperature a few degrees. Both Maenner and Atucha said there is only so much you can do.

"When you see phenomena like this in the entire state, it has to be related to weather patterns rather than management at an orchard level," said Atucha.

Still, the Wisconsin Apple Growers Association is focused on improving practices. Maenner said its January meeting will address the issues growers have faced this year. She plans to host panels on irrigation and improving soil health to boost water retention — things Maenner says they weren’t talking about when she started with the association 25 years ago.

But for now, growers are focused on squeezing as much out of the season as they can.

"There are apples out there," said Maenner. "And because the crop is low, we really need people to go to the orchards and buy the apples that they have."

For orchards like Turkey Ridge, whose season was cut short, all they can do is hope for a better crop next year. Luckily, decades in the business have made orchardists as hardy as the trees they grow.

"The Turkey Ridge crew is still looking to next year," said Welsh. "We’re not bailing out."