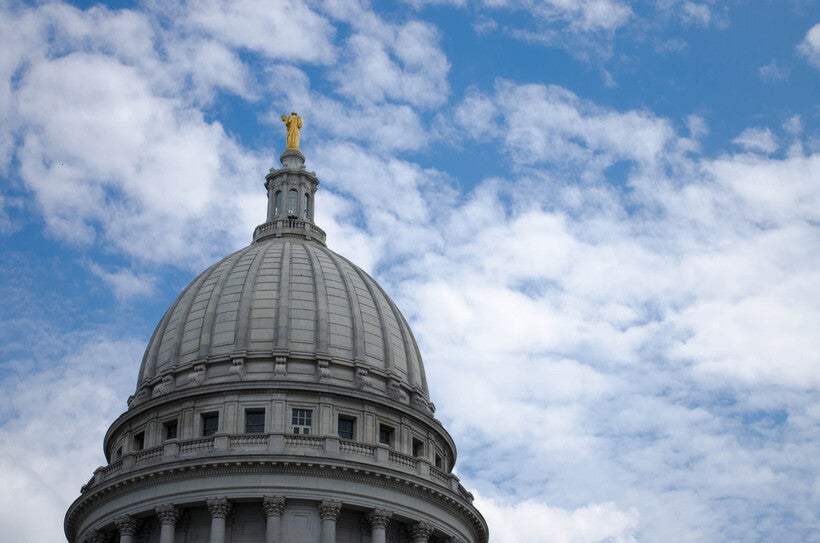 Wisconsin lawmakers and activists are clashing this week over potential changes to state gun laws in the wake of two mass shootings in Ohio and Texas over the weekend.

The killings have spurred renewed conversation about the role of state regulations in curbing gun violence, with state Democrats largely pushing for new restrictions while Republicans argue state laws are sufficient.

The conversation is happening as the state marks the seventh anniversary of a mass shooting at a Sikh temple in Oak Creek that killed six people.

Gov. Tony Evers on Monday called for lawmakers to take up new restrictions, including universal background checks and a so-called "red flag" law.

Proponents of red flag legislation in Wisconsin say friends and family of potentially dangerous individuals should be able to act when they see early signs of potential violence.

"Our children are dying. Our friends and neighbors are dying. At the grocery store. At the bar. At school. At the movies. At church," Sargent said. "Although we cannot change the past, we must continue, today and every day, to fight like hell for the living."

The plan is one of several backed by The Wisconsin Coalition for Gun Safety, a group of advocacy organizations, lawmakers and individuals in favor of stricter firearm laws.

Jeri Bonavia, executive director of the Wisconsin Anti-Violence Effort, which is a member of the coalition, said the proposal has yielded results in other states, particularly in preventing suicides.

"It’s a policy we know would have an impact," Bonavia said.

Other proposals pushed by the coalition include universal background checks for gun sales, which would require checks for online sales and transactions at gun shows, and a tax exemption for gun safes, which is aimed at encouraging more individuals to lock up their firearms at home.

Rep. Lisa Subeck, D-Madison, has also proposed a series of bills related to gun storage, including a plan that would require gun stores to lock up their wares after closing time.

"People should feel safe in their communities, and yet the vast majority of Wisconsinites are currently represented by politicians who won’t even discuss the most basic steps that can be taken to protect the public and prevent these terrifying acts of violence," Hintz said.

Republican Leaders Push Back On Changes

While GOP leaders of the state Legislature have expressed their sympathies for the shooting victims and their families this week, they are largely silent on proposed changes to state law.

"The events that took place this weekend were tragic. Hate and racism have no place in our country," said Senate Majority Leader Scott Fitzgerald, R-Juneau, in a prepared statement. "As we come back for the fall session, our caucus will have discussions around all newly proposed legislation like we always do."

Fitzgerald’s office did not respond to questions about the senator’s position on proposals currently before the Legislature or other possible actions.

However, Fitzgerald indicated earlier this year the "red flag" proposal is unlikely to get support in the Republican-controlled state Senate.

"I don’t support the government intervening to take firearms from citizens without due process," Fitzgerald told WPR in February. "Without seeing any specific legislation yet, I’m concerned that what I’ve seen discussed publicly has been too broad and could result in situations where that occurs."

Assembly Speaker Robin Vos, R-Rochester, also did not respond to a request for comment Tuesday on current or future gun proposals in the Legislature.

However, Vos tweeted that he looks forward to meeting with Evers next week to talk about proposals.

"I will not entertain proposals to take away second amendment rights or due process," he said. "Hopefully, we can find common ground on the real problem by addressing the mental health issues facing Wisconsin."

Vos said earlier this year he could be open to supporting a red flag law, but that it would be need to be limited in scope.

Bonavia criticized the lawmakers for not moving quickly on state law changes this week.

"It’s inexcusable," she said. "We know that these policies would be effective and we know that they’re supported by the vast majority of Wisconsinites."

"What we’re seeing playing out here are a group of legislators who are more responsive to the NRA, to a special interest group, than they are to their own constituents and to the needs of the citizens of Wisconsin," Bonavia said.

In February 2018, Democratic lawmakers attempted to bring the background check proposal up for a vote in the state Assembly, but GOP lawmakers used procedural moves to avoid the vote and replaced the measure with a proposal to fund grants for schools to provide firearms to safety officers and crack down on so-called "straw purchasers" in Wisconsin.

Since 2011, the Republican-controlled Legislature has passed a number of bills softening restrictions on guns in Wisconsin. That includes repealing a 48-hour waiting period for gun sales in 2015 and approving the state’s concealed carry law in 2011.

State-based advocacy group Wisconsin Gun Owners, Inc., and a lobbyist for Wisconsin Firearm Owners did not respond to requests for comment about the status of Wisconsin gun laws and support or opposition of any changes.

Wisconsin falls roughly in the middle of all 50 states in terms of gun restrictions and freedoms, according to a survey of national assessments.

The Giffords Law Center to Prevent Gun Violence, a national nonprofit that promotes stricter gun laws, ranks Wisconsin 18 out of all 50 states for the strength of its gun control measures.

The Cato Institute, a libertarian think-tank, ranks Wisconsin 15 out of all 50 states for freedoms related to gun ownership.

Aside from those partisan groups, a non-partisan, 2019 study from The BMJ, a peer-reviewed medical journal, placed Wisconsin among states with some of the most permissive gun laws in the country, but pegged it as one of the most restrictive states in that cluster. 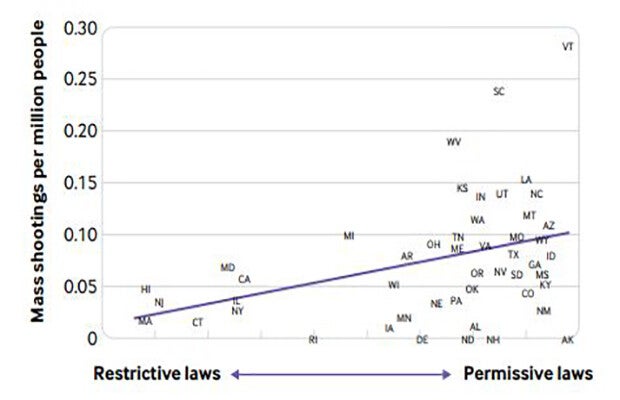 A 2019 study from The BMJ, a peer-reviewed medical journal, found Wisconsin gun laws fall in the middle of the pack in relation to other states. Image courtesy The BMJ