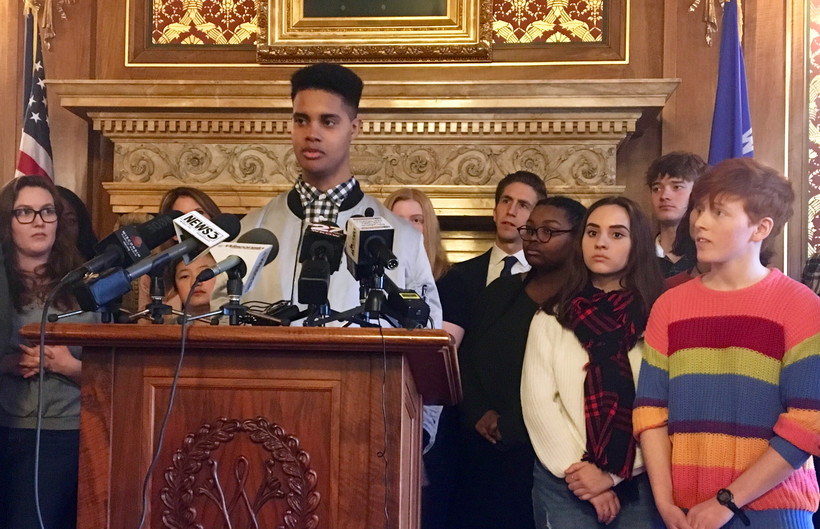 After Call From Students, GOP Blocks Measure On Background Checks For Gun Purchases

Republican state lawmakers on Tuesday blocked their Democratic colleagues' attempt to take up a bill that would institute universal background checks for gun purchases in Wisconsin.

Democratic lawmakers attempted to bring the proposal up for a vote, but GOP lawmakers used procedural moves to avoid the vote and replaced the measure with a proposal to fund grants for schools to provide firearms to safety officers and crack down on so-called "straw purchasers" in Wisconsin.

Lawmakers voted 71-24 to approve that measure.

The bill would need to be approved by the state Senate before moving to Gov. Scott Walker for his signature. The Senate approved a separate, but similar bill penalizing "straw buyers" Tuesday. "Straw buying" is the practice of buying a gun for someone who's legally barred from owning one.

The moves on the Assembly floor Tuesday evening came after Madison high school students joined Democratic lawmakers in the Capitol on Tuesday morning to call for strengthening Wisconsin’s gun laws in the wake of another deadly school shooting.

"We have an obligation to these kids, to the people of the state who want us to act on background checks," said Rep. Chris Taylor, D-Madison, during the floor debate. "This is the bare minimum we should be doing."

Democrats are pushing for consideration of a number of gun bills in the Capitol, including the proposal to institute universal background checks, and bills that would prohibit individuals convicted of domestic violence from buying firearms and outlaw the sale of bump stocks, which make weapons more deadly. For Madison East High School sophomore Lydia Hester, learning how to survive a school shooting has been part of her entire education.

"School shootings have been a reality for me my whole life," said Hester. "From kindergarten, I’ve learned how to sit under a desk and be silent so a shooter doesn’t hurt us. This is not something that a 5-year-old should have to think about."

"We have been fed up for years, but the Florida shooting was the last straw," Hester said.

"There’s a system in this country that’s entitling some people to violence," Vanhook said.

Some gun rights advocates have pushed for arming teachers in response to the violence. Students pushed back on that idea.

"I think the question we should be asking is what if we did something to prevent the action from happening in the first place?" said Caitlin King, a student at Memorial High School in Madison.

Democratic Minority Leader Gordon Hintz, D-Oshkosh, said Democratic lawmakers have been pushing gun legislation "for years," but it "hasn’t been a priority" for GOP lawmakers in power.

"We have reached the point where enough is enough," Hintz said. "The silence has been deafening for too long in this state."

"I think that the Assembly and the Legislature, along with Gov. Walker, has been very forward thinking," Vos said later Tuesday. "It's why we've worked an awful lot on mental health."

Vos said he would be "open" to legislation that would implement firearm training for teachers. Vos said the Democrats' gun proposals haven't garnered broad-based support.

He also criticized Democrats for their calls.

"It's all politics, all the time," Vos said. "And I think it's really sad, and it's really cynical, because they are preying on the fears of some Wisconsinites and using it for their own political purposes."

The governor’s office didn’t immediately respond to a request for comment.