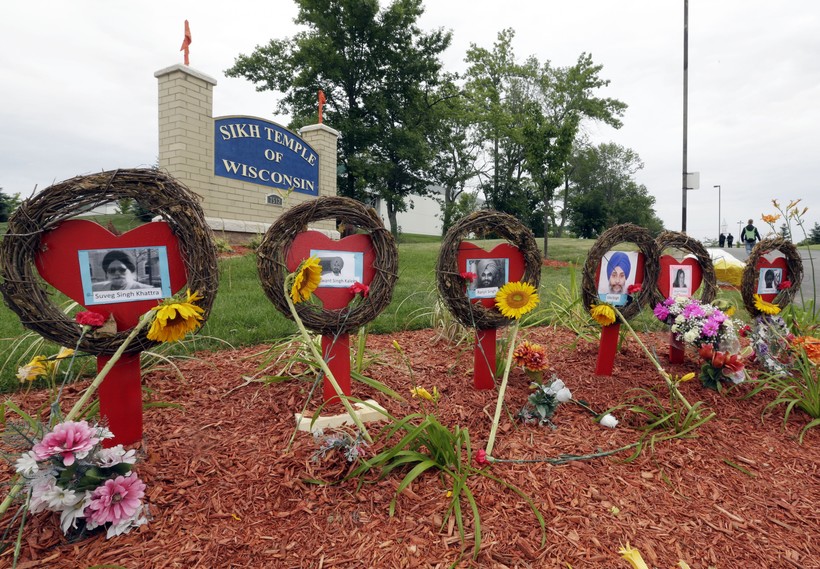 A makeshift memorial is seen before a candlelight vigil in the parking lot the Sikh Temple of Wisconsin Monday, Aug. 5, 2013, in Oak Creek, Wis. Morry Gash/AP Photo

This Saturday, Aug. 5 marks the five-year anniversary of a horrific hate crime in Oak Creek, Wisconsin.

White supremacist Wade Page entered the Sikh temple in Oak Creek, killed six worshippers and left one person in a vegetative state that continues to this day. Page was shot and killed by a police officer.

Among the dead was Satwant Singh Kaleka, who was president of the temple. Kaleka's son Pardeep Kaleka reacted to his father's and fellow worshippers' deaths in an unlikely way: he started an anti-hate organization with a former white supremacist named Arno Michaelis.

"I had a feeling that this had something to do with the ideology that I had once espoused and propagated in society," said Michaelis of his reaction to the massacre.

Michaelis was a founding member of a skinhead organization and the lead singer of Centurion, a white power/hate-metal band.

Before the shooter's identity was determined, Michaelis feared it could be someone he had known personally, or had recruited himself into the white power movement.

Michaelis didn't know Wade Page, but the massacre still pushed him to reach out to Pardeep. He said he felt "urgency to respond in a tactical way, which is really to respond with compassion."

And Kaleka agreed to meet with him in spite of understandable apprehension.

"I really wanted to understand the 'why' from a person who had lived that lifestyle," Kaleka said.

Kaleka and Michaelis eventually founded Serve 2 Unite, an organization that over the years has worked with people including shooting victims, homeless veterans, students and former extremists.

Today, Kaleka is a therapist who specializes in working with trauma survivors like himself.

"When me and Arno first started doing this, obviously front and center was white supremacy. But we kept coming back to trauma, hurt, pain," Kaleka said.

"A lot of what my personal mission is, is to acknowledge the trauma behind violence. From my experience as a perpetrator, I understand that hurt people hurt people," Michaelis said.

Michaelis said he believes his rough childhood and adolescence played a significant role in his attraction to racist rhetoric.

"My story proves the possibility of transformation and of reformation. When Pardeep shares his story, you see someone who is in the healing process of his father's murder through helping other people," Michaelis said.

This Saturday Serve 2 Unite will put on a 6k run/walk in Oak Creek to commemorate the anniversary of the massacre.