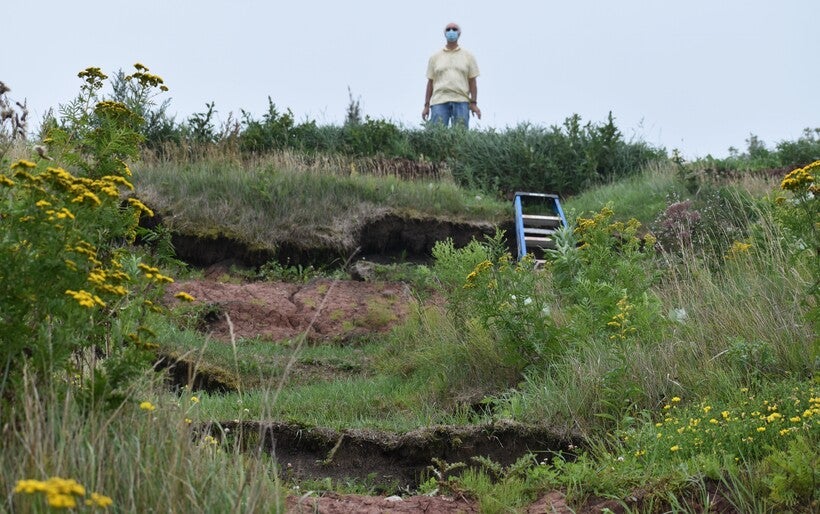 As can be seen in this photo taken Aug. 21, 2020, the lakefront property of Minnesota couple Mike Briggs and his wife Kathy has eroded away on a Lake Superior bluff just outside of Port Wing. Danielle Kaeding/WPR

ListenDownload
Winds stir up murky waves against the shoreline and clay bluff at the edge of Mike and Kathy Briggs' lakefront property on the south shore of Lake Superior. The couple from Cannon Falls, Minnesota, fell in love with the place the moment they laid eyes on it more than 20 years ago. They bought a cabin just outside of Port Wing, and the couple thought it was a dream come true.

"We thought we'd have it forever," said Mike Briggs. 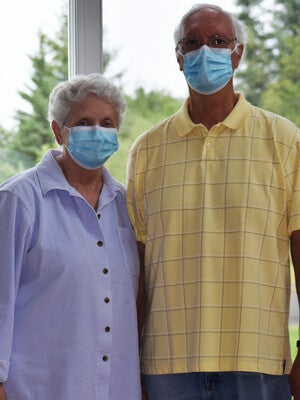 Mike and Kathy Briggs sold their cabin and garage for $1 each in September 2019 after high lake levels and storms eroded their property. Danielle Kaeding/WPR

They never imagined that they would watch pieces of their property literally slip away.

The Briggs watched as a couple pine trees where they used to hang Christmas lights started to slump down the bluff as high lake levels and storms battered the hillside. They estimate they've lost around 75 feet of their lawn each year for the last five years.

They debated whether to remodel their home and install rocks to protect the shoreline, knowing it would be expensive. As the lake edged too close for comfort, the couple began building a new home further back on the property in 2018. Last fall, they sold the cabin and their garage for $1 each to another couple who had them moved down the road.

"We got it done in September, and it's a good thing because it would have been going in the lake this spring," he said.

Mike and Kathy Briggs are not alone. Record-setting water levels on the Great Lakes have caused erosion and flooding that's cost shoreline communities an estimated $500 million in damage. Many lakefront landowners and local governments are now examining ways to make their properties more resilient. 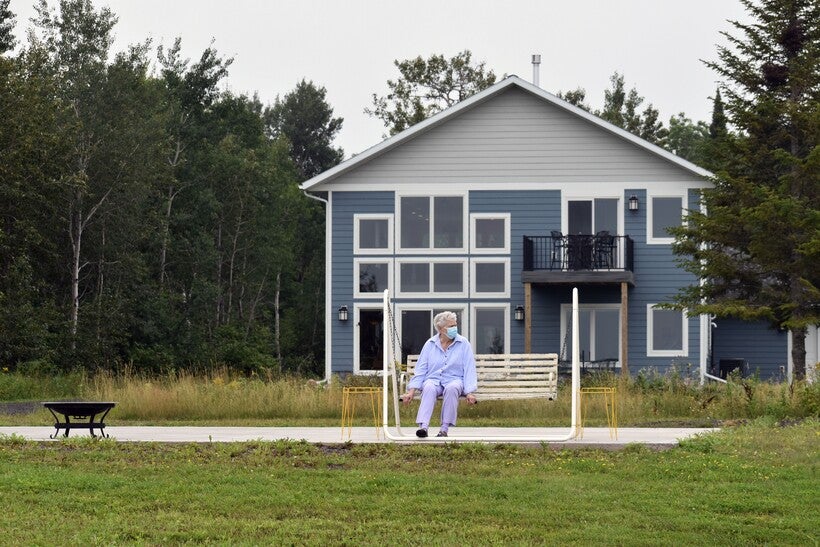 Kathy Briggs of Cannon Falls, Minnesota, sits on a swing Aug. 21, 2020, where the couple's garage was located before they sold it and their cabin for $1 each last fall. The couple began building their new home further back on the property in 2018. Danielle Kaeding/WPR

On Lake Michigan, water levels are just shy of the record high set back in October 1986, prompting a flurry of activity along the shoreline. The agency has already received double the requests that were filed last year for installing emergency erosion controls like rock or concrete along the lake. As of the end of August, the agency had received 280 self-certification forms for installing material along the lake compared to 134 in 2019.

Placing rocks or rip rap along the shore can cost communities and property owners hundreds of thousands of dollars, said Sarah Szabo, water management specialist with the Wisconsin Department of Natural Resources.

"It's a big choice, and when they're looking at retirement, kids' college, property values," said Szabo. "it's not an easy decision."

The erosion controls are a temporary means to prevent further damage as property owners mull whether to apply for a permit to keep the protection in place or remove it later.

"I haven't met anybody yet who wants to remove it after the high water is done," said Szabo. 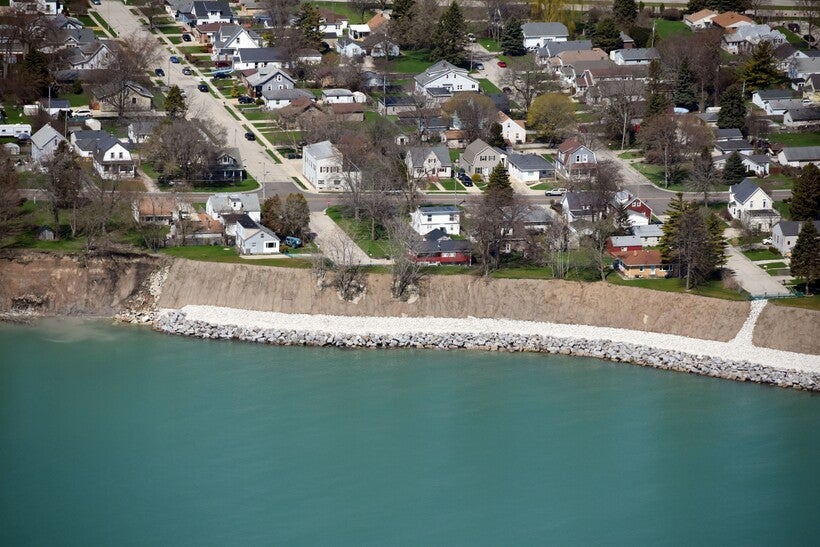 That can pose a problem for a number of reasons. Szabo said most landowners have met the agency's standards for installing emergency material. But the DNR will need to work with a few who have placed rocks further out into the lake bed, which is held in public trust for all to use whether that's for navigation or recreation.

"A nice wide beach is a lot better protection than no beach, so being aware of the coast as a whole, is something that needs to be in the mindset to be resilient," said Bechle.

Plus, the coasts are among some of the most biologically productive areas in the Great Lakes, said Cameron Davis, who was appointed by former President Barack Obama to coordinate 11 federal departments on Great Lakes restoration projects.

"That's where fish spawning takes place. That's where migration takes place as birds and waterfowl fly through," said Davis. "So we don't want to compromise biological integrity when we are looking to protect our shorelines."

Davis has been working with landowners and government agencies on what he calls a living shoreline approach as vice president of the coastal engineering firm GEI Consultants. He said such projects may involve grading bluffs or planting dune grasses and trees to stem erosion. 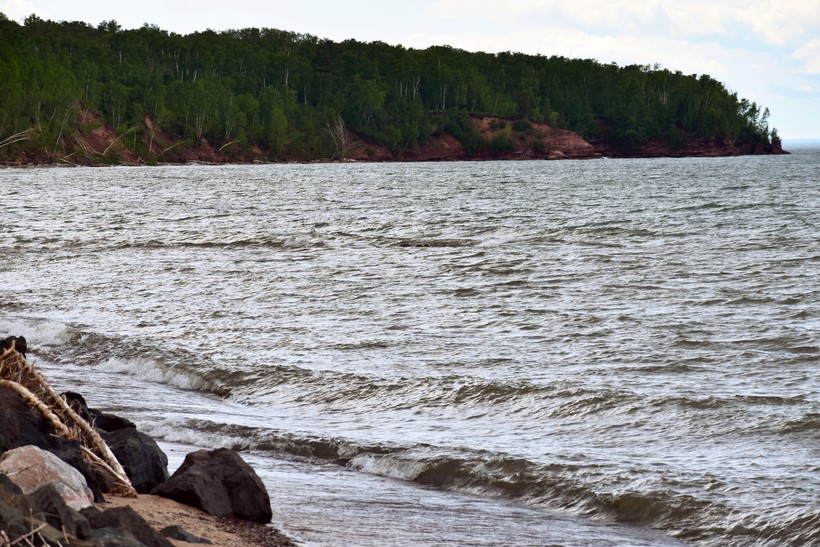 Brian Hinrichs, senior client manager with engineering firm Foth, said they're working on a Lake Superior project that involves moving a city road inland in Marquette, Michigan. The work aims to stabilize around 1 mile of shoreline by creating dunes, wetlands, and a cobblestone beach where the road currently exists.

"We're finding a balancing act of how we can put in these shoreline protection infrastructure elements looking forward into the future — not just at the current lake water levels," Hinrichs said.

Other proactive steps may help lakefront property owners and communities deal with erosion, such as diverting stormwater away from bluffs or building away from the water. Some coastal counties require buildings to be set further back from bluffs to keep development away from high water and eroding banks.

The idea hasn't always been an easy sell for property owners who want an expansive view of the lake, said Rob Schierman, zoning administrator for Bayfield County.

"Property owners can relate to our concerns a little bit better because they can look up and down their shoreline and see the act of erosion," said Schierman. "That in itself helps our cause and gets people to buy into our requiring greater setbacks."

Still, many properties along the lakes were built long before current regulations were in place. In that case, Sea Grant's Bechle said moving homes away from the water may be one of the first things to consider. 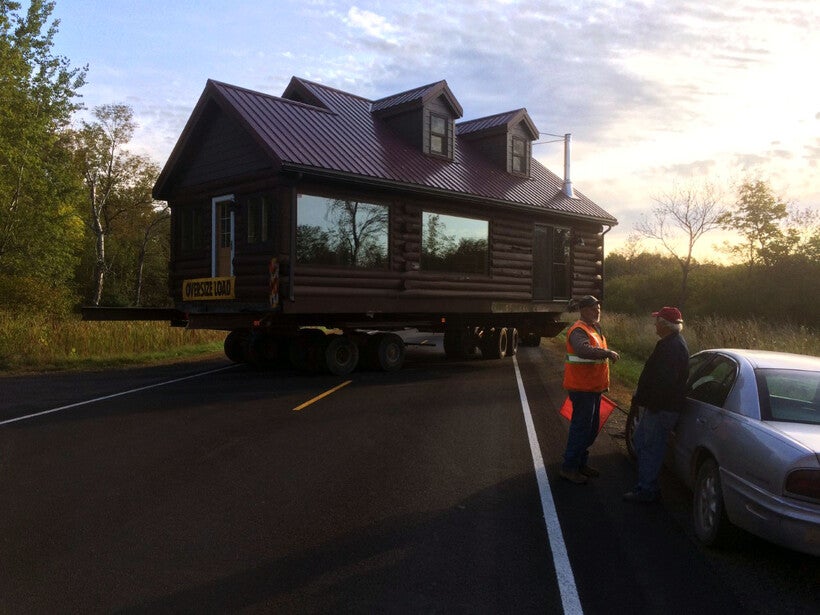 The Briggs couple sold their cabin for $1 after erosion threatened to send it toppling into the lake. The cabin was hoisted off its foundation and moved down the road to its new home last fall. Photo courtesy of Mike Briggs

Mike and Kathy Briggs said they have no regrets after selling their cabin and building further back on their property.

"Something had to be done," he said. "You can't control the lake."

But communities can plan and prepare for coastal hazards, said Kate Angel, program and planning analyst with the Wisconsin Coastal Management Program. The program funded a coastal resilience project in southeastern Wisconsin several years ago that seeks to help communities identify coastal hazards by mapping rates of erosion along shorelines using historical photographs. A self-assessment tool has also been created to identify areas that are vulnerable.

Some lessons learned are now being applied in other coastal areas that are experiencing damage from high lake levels.

The threat of more flooding and erosion remains as lake levels are expected to remain high in the next six months. Lake Michigan is almost 3 feet higher than normal, and Lake Superior is expected to remain close to a foot above the long-term average, said Deanna Apps, physical scientist with the U.S. Army Corps of Engineers.

"It's going to take several months, even years of dry conditions to really get lake levels moving or back toward average water levels," said Apps.

It's a stark contrast to record-low levels the lakes have witnessed in the last 20 years.

Lake Superior hit a record low for this time of year in 2007, while Lake Michigan reached an all-time record low in 2013. The primary driver then was evaporation due to warming surface water temperatures, said Drew Gronewold, associate professor at the University of Michigan School for Environment and Sustainability.

"What we're seeing is the tendency for there to be the strongest swings between high and low water levels anytime there's a slight change in precipitation or evaporation," said Gronewold.

Right now, precipitation has been winning the battle as Wisconsin and the Midwest have seen some of the wettest periods on record in recent years. Scientists highlight that rainfall and storms are only becoming more frequent and intense due climate change.

Northern Wisconsin has witnessed three storms in the past decade that were only projected to occur once in a lifetime, which includes flooding in 2016 that blew out Saxon Harbor on Lake Superior. 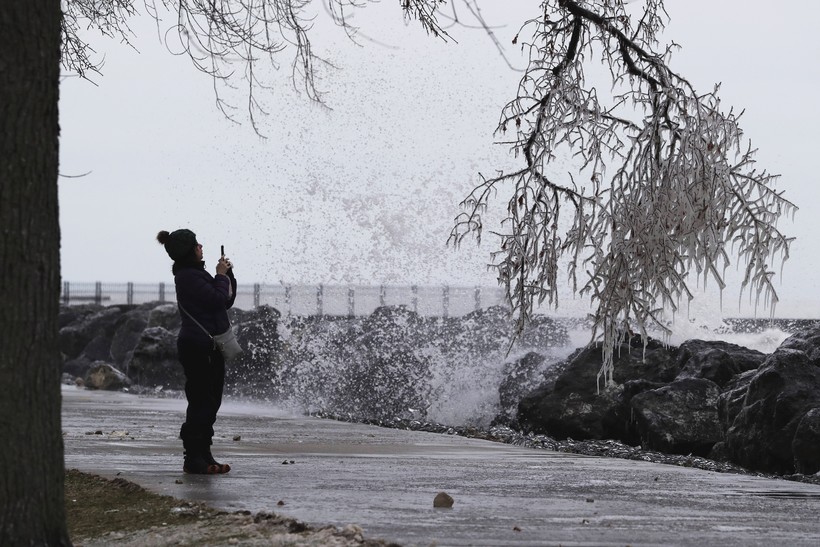 A woman takes photos of the shore of Lake Michigan. Pounding waves and steady rain from severe storms caused damage up and down the shoreline in January 2020. Nam Y. Huh/AP Photo

In January, storms along Lake Michigan prompted a federal disaster declaration after causing an estimated $30 million in damage across southeastern, including at Port Milwaukee. The storms degraded dock walls and caused damage to rail, warehouse and terminal facilities, said port director Adam Tindall-Schlicht. He hopes they can work with the Federal Emergency Management Agency on options to prevent further damage.

"A lot of our dock walls, a lot of our warehouses, including some that were damaged in January, are already 60 years old," said Tindall-Schlicht.

High water and storms threaten to undermine aging assets at state ports, which have an economic impact of $1.4 billion on Wisconsin. More than half of the coastal structures on the Great Lakes were built before World War I and many are beyond the life of their design.

In Sheboygan, the city has two aging water intakes on Lake Michigan that are 60 to 100 years old, said Mayor Mike Vandersteen.

"That infrastructure is being challenged and needs to be reinforced," said Vandersteen.

Vandersteen also chairs the Great Lakes and St. Lawrence Cities Initiative, a coalition of Great Lakes mayors. They're pushing Congress to invest $20 billion in water infrastructure and $500 million in coastal protection under the next federal coronavirus funding round as a way to speed up the economic recovery.

"A dollar spent for investing in infrastructure to protect areas from high water and flooding generally saves about $10 in damages that need to be repaired," said Vandersteen.

For now, lawmakers are at a standstill on a deal. There's no guarantee that Great Lakes cities will see any relief and no sign that high water will subside any time soon.