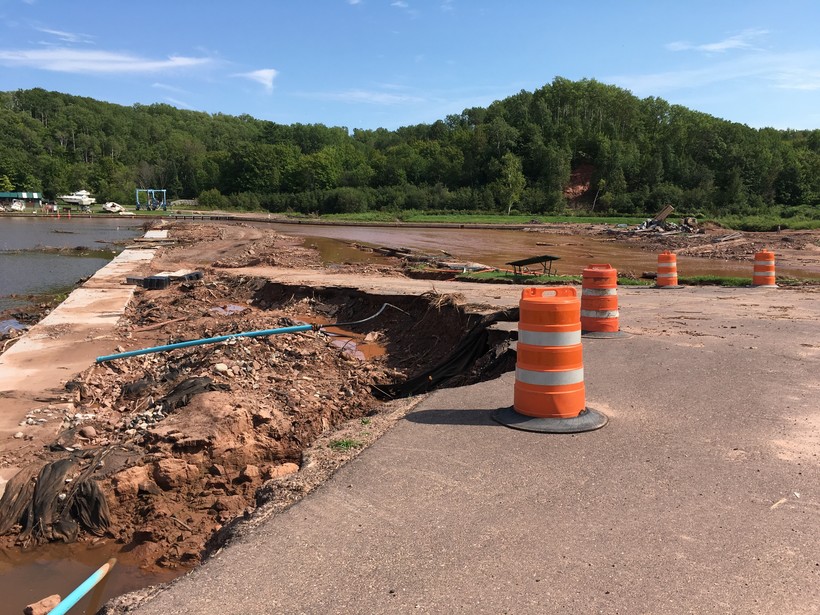 Progress is slowly being made as National Guard and county crews have been clearing trees and debris from Saxon Harbor after a July storm sent Oronto Creek roaring through its marina and campground and causing $10 million in damages.

What’s left at the harbor are piles of twisted metal and wood. Among one heap rests a child’s plastic lawnmower. Saxon’s Neil Gilbertson lost two boats in the July 11 storm. The bow of one rests in the grass near the gutted marina.

"The boat itself, the hull, was out here in 20, 25 feet of water – not even a quarter mile outside the breakwall," Gilberston said. "The bow was three miles down the beach."

And as people slowly pick up the pieces and replay the images of destruction, optimism exists.

"Saxon Harbor will be back. It might take us two years? Three years? Who knows how long that road will be, but we’re started on the road back," Iron County Forest Administrator Eric Peterson said.

Gov. Scott Walker returned to the flood damaged harbor Monday to see how the cleanup is progressing. As thoughts turned to rebuilding, officials discussed ways to prevent future devastation by redesigning the marina and campground.

Iron County Board Chair Joe Pinardi said he’d like an early warning system installed at the harbor to prevent future loss of life. His friend and Iron County board member, Mitch Koski, drowned during the storm.

"They have sensors that they can put in the water that they can alert someone of high water levels coming in," Pinardi explained.

Walker said a nearly $24,000 grant from the Wisconsin Coastal Management Program is being awarded to the county to help with planning for the harbor’s future.

"You want to repair it so it fits, not just today’s needs, but the needs going forward," Walker said.

Officials hope they may begin to rebuild the harbor as early as next summer.

Seventy vessels were moored in the harbor when the storm hit. The storm sank six boats and sent many more floating into Lake Superior, WPR previously reported.

Eight counties and one tribe in northern Wisconsin have access federal money to help pay for an estimated $25 million, as of early August, in flood damage to roads and public infrastructure after the storm.