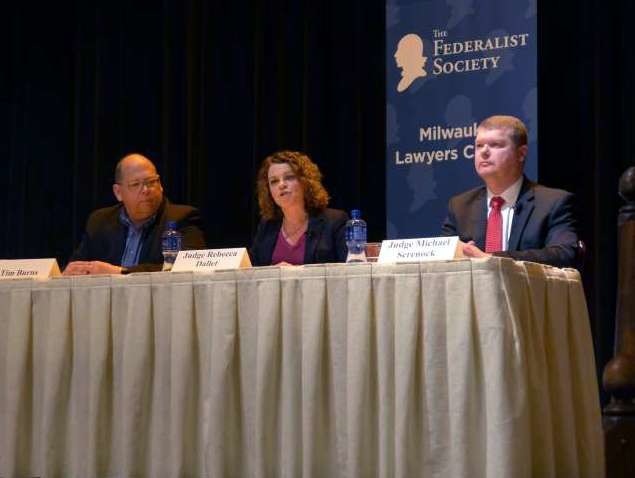 3 Candidates Are Running In The Officially Nonpartisan Feb. 20 Primary
By Shawn Johnson
Share:

There are three candidates on the ballot for Tuesday's Wisconsin's Supreme Court primary, but how they fare in this officially non-partisan race could hinge on someone else.

President Donald Trump has been a factor in local elections around the country over the past several months, and the race to fill a seat on Wisconsin's highest court is no exception.

To try to get their supporters to the polls, the two candidates backed by Democrats — Burns and Dallet — have made unusually explicit attacks on the president.

Burns has been the most outspoken. During a recent debate hosted by the Milwaukee chapter of the Federalist Society, he introduced himself as an "unshakeable champion of liberal, Democratic and progressive values," before turning his attention to the conservative lawyers and judges in the crowd.

"But enough about me, I want to talk about you," Burns said. "You have weakened our democracy to the point that we elected a perverse show dog named Trump to lead our great nation."

Dallet has at times run a more traditional campaign for the court, emphasizing her career as a judge and a prosecutor. That was evident during most of her first TV commercial, where she appeared in her judge's robes in a courtroom.

But what stood out in Dallet's spot was the beginning, which featured grainy black and white footage of Trump.

"He's attacked our civil rights and our values," the narrator said. "She'll protect them."

Both Burns and Dallet recently attacked Trump when he reportedly made disparaging remarks about several African nations in connection with the immigration debate.

They also pressured Screnock – the candidate favored by Republicans – to take a stand. Screnock did not, and said he won't.

But while Screnock won't say much about his politics, by another measure, his campaign has been as partisan as they come.

More than half of Screnock's campaign donations, roughly $142,000, have come from the Republican Party of Wisconsin.

A First In Wisconsin

Former Supreme Court Justice Janine Geske said she's not aware of another Supreme Court candidate ever attacking a president during a campaign the way Burns and Dallet have this year.

"I don't remember that ever happening," said Geske, who served on the Supreme Court from 1993 to 1998 and prior to that was a Milwaukee County Circuit Court Judge.

"When I ran way back when, sometimes when you went to small towns, that's what people wanted to talk about were national issues," Geske said. "That's really not what the Supreme Court deals with."

Geske said she personally favors keeping the judicial branch more detached from politics, but she concedes not everyone sees it that way.

"These are odd political times," Geske said. "So it might not work in a future election, but it's probably a good time to try it, considering all the turmoil in our political system."

In Wisconsin, candidates for the state Supreme Court have typically found ways to hint at their partisan leanings without coming out and saying it.

In recent elections, however, conservative candidates have been more overt about their political leanings.

Bradley also spent much of that campaign responding to letters to the editor she wrote as a college student, including one where she called former President Bill Clinton a "a tree-hugging, baby-killing, pot-smoking, flag-burning, queer-loving, bull-spouting '60s radical socialist adulterer." Bradley later apologized for the letters.

But Bradley won her race over Appeals Court Judge JoAnne Kloppenburg by a 52-47 percent margin, preserving the court's 5-2 conservative majority.

Burns argues it's time for liberals to let voters know where they stand, and he's gone all-in.

"I am the first candidate on the left in this state for this position who has said 'Enough is enough' with this nonsense that judges don't make political decisions," Burns said.

While Burns concedes that many judges and lawyers don't care for his outspoken approach, he said the public supports it, especially when he talks about Trump.

"Most people think the key issue of the day is we have a megalomaniac in Washington," Burns said after the Federalist Society debate where he attacked Trump. "If I don't speak to that, what use am I to voters in the sense of telling them what my values are? They want to know."

When Dallet began her campaign in June of last year, she said she would not embrace a party affiliation during the campaign.

But like Burns, she spoke at the 2017 Democratic State Convention, and she also criticizes Trump, though not in such explicit terms.

Dallet said what distinguishes her approach from Burns' is that she has not weighed in on issues that could potentially come before the court.

Screnock argues both Burns and Dallet are wrong to speak so freely.

His pledge to fight judicial activism and adhere to the letter of the law is remarkably similar to those delivered by conservatives Justices Bradley, Michael Gableman, Patience Roggensack and Annette Ziegler during their successful campaigns for the Supreme Court since 2007.

"I know the dangers of a court legislating from the bench," Screnock said. "Judges are not legislators. Nor are we executives. The role of the court is to interpret and apply the letter of the law as it is written based not on our personal beliefs or political preferences, but based on the statutes and the Constitution."

That's not to say Screnock has never taken a political stand.

Nearly 30 years ago, the Milwaukee Journal Sentinel reported that Screnock was arrested twice for attempting to prevent people from entering a Madison abortion clinic.

Today, he sidesteps discussing Trump and politics in general. But prominent Republicans — from Gov. Scott Walker to U.S. Senate candidate and current state Sen. Leah Vukmir — have endorsed him, while the state Republican Party has spent heavily on his campaign.

If past history is any guide, voter turnout for the Feb. 20 primary will be extremely low, even in the single digits.

Voters can only select one candidate. The top two vote-getters on Tuesday will advance to the April 3 general election.

At that point, money is expected to flood into Wisconsin as national groups get involved, including one — the National Democratic Redistricting Committee — run by former U.S. Attorney General Eric Holder that has the backing of former President Barack Obama.