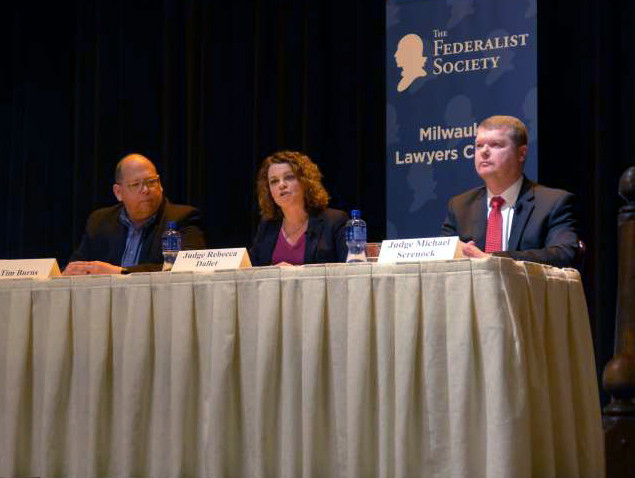 One of the candidates for the Wisconsin Supreme Court used a Federalist Society debate Monday night to take aim at the conservative group, telling members that they had helped clear the way for President Donald Trump and were sitting silently by as Trump damaged the country's reputation.

Burns' comments came in his introductory statement where he said he would be an "unshakeable champion of liberal, Democratic and progressive values," then quickly pivoted to attacking the debate's hosts.

"But enough about me, I want to talk about you," he told the Federalist Society audience gathered in the ornate ballroom of the Wisconsin Club in downtown Milwaukee.

"You have weakened our democracy to the point that we elected a perverse show dog named Trump to lead our great nation," Burns said. "You now help that demagogue pack our federal courts and you sit silently by as he destroys our moral standing in the world."

While neither of the other two candidates directly addressed Burns' remarks, both suggested they would be less political if elected to a 10-year term on the court.

"The goal here is to improve the Supreme Court, to make sure it works better," said Dallet, the other liberal candidate in the race. "By your own behavior, Mr. Burns, you have shown that you cannot do that."

Screnock, the candidate favored by Republicans, said his personal beliefs would not influence his work on the court.

"I am a judge, and I know firsthand the importance of upholding the rule of law," Screnock said. "I know the dangers of a court legislating from the bench."

All three candidates will be on the Feb. 20 primary ballot. The top two vote-getters will advance to the April election.

With Burns and Dallet potentially battling over a similar block of voters, they took repeated aim at each other during Monday's debate.

Burns criticized a decision Dallet wrote in Milwaukee that ruled police had the right to search a black man who had been standing outside of a convenience store for a few minutes. Her ruling was later overturned by the Court of Appeals.

"I have to be honest," Burns said. "When I look at her case law, some of it frightens me."

Dallet said she appreciated the Appeals Court's guidance in the case but noted that police found the man in question had a record and was carrying a weapon.

"I'm not going to apologize for standing up for safer communities and for victims," she said.

All three candidates are vying to replace conservative Justice Michael Gableman, who announced he would step down after his current 10-year term ends.

Conservatives currently hold a 5-2 majority on the court.

Monday's forum was the first time where Burns, Dallet and Screnock appeared on the same stage.

"It's events like this one that is the reason we exist," said Milwaukee Federalist Society Chapter President Robert Driscoll.