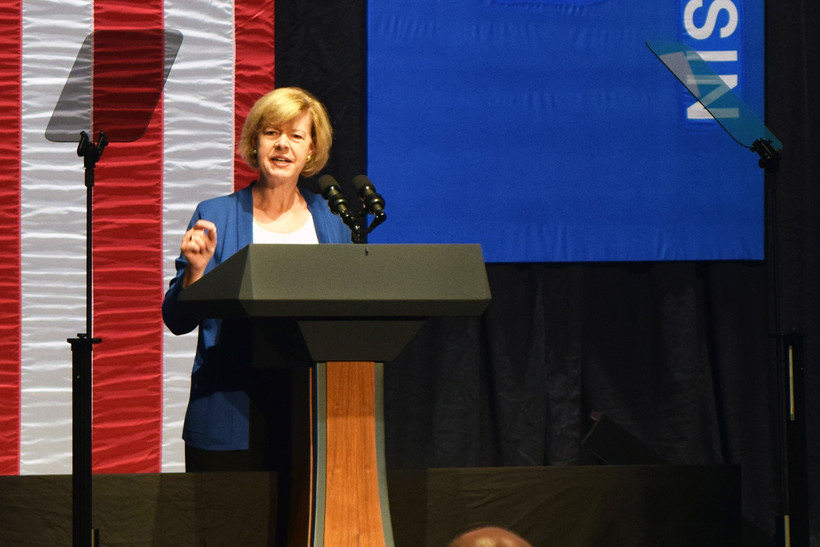 Wisconsin Democrats Use Convention To Attack Trump, Look Ahead To 2018

Wisconsin Democrats used speeches at their annual state convention on Friday night to diagnose what went wrong in the 2016 election, bemoaning their own difficulties reaching voters at the same time that they attacked Republican President Donald Trump as unfit for office.

Democrats also looked ahead to 2018, with U.S. Sen. Tammy Baldwin telling the crowed that voters were tired of getting "screwed over" by politicians like Trump who promise change but don’t deliver.

"The people of Wisconsin need champions, and they’re not going to find them in the Republican Party," Baldwin said. "They need us to win next November."

Baldwin attacked Trump for his proposed cuts to Medicaid programs for the poor, elderly and disabled, and for his support of a health care bill that would cut federal spending but leave an estimated 23 million people uninsured.

"I remember Donald Trump coming to Wisconsin during the campaign and saying the same things Republicans always say here," Baldwin said. "But it was another scam."

Baldwin is up for reelection in 2018. Several Republicans are considering challenging her, but none of them have formally jumped into the race.

Trump was a unifying thread in most speeches Friday night, including from other members of Wisconsin’s congressional delegation.

Kind called for a return to the values, and the approach of President John F. Kennedy.

U.S. Rep. Mark Pocan said Trump was hurting Republicans to the point that Democrats were poised to take control of the U.S. House in 2018. The key, Pocan said, was reaching out to the hundreds of thousands of Democratic voters who stayed home last November.

"We have to make them care again, and we do that by prioritizing them," Pocan said. "The average person doesn’t watch (MSNBC hosts) Rachel Maddow and Chris Hayes every night. They sit around their kitchen table wondering if they can pay their mortgage."

"The days of us ignoring Wisconsin nationally, I hope, are put to rest," Garcetti said.

Republicans won up and down the ballot in Wisconsin in 2016, most notably by capturing the state’s 10 electoral votes for the first time in 32 years.

While both Madison lawyer Tim Burns and Milwaukee Judge Rebecca Dallet were courting Democratic votes, they took decidedly different approaches. Burns presented himself as a proud progressive while Dallet stressed the need for judicial candidates to remain independent.

Both candidates are seeking the Supreme Court seat currently held by Justice Michael Gableman, a member of the court’s 5-2 conservative majority who enjoyed strong support from Republicans in his 2008 election.

"We cannot get back to fair and impartial courts without recognizing a brutal truth," Burns told Democrats. "The political values of judges matter. Republicans know that."

Burns said conservative judges like Gableman had been "chipping away" at laws that protect democracy and the middle class.

"That is why I’m proud to be running a different type of campaign for the Wisconsin Supreme Court," Burns said. "I will be talking about my values -- nonstop. I am running a non-partisan race, but I will not run from progressive organizations and progressive politicians."

Dallet, who announced her candidacy for the court Thursday, did not mention Burns by name in her speech, but she seemed to reference his platform.

"Some will tell you that the solution to partisan judges on the right is to elect more partisan judges — just from the other side," Dallet said. "I have a different view of the world, in that I think judges really do need to be independent."

Dallet hinted at messages that resonate with Democratic voters, including by celebrating the U.S. Supreme Court decision that legalized gay marriage.

"But I don’t think the answer is just to come here and tell you that judges need to vote like partisan Democrats to counteract partisan Republican judges," Dallet said. "If we fall into the trap of politicizing the third branch, we turn our back on our true progressive history."

No Candidates For Governor

Noticeably absent from the convention’s speaking program was any candidate to take on Gov. Scott Walker in 2018.

While several candidates have indicated they’re likely to run, they’ve yet to make it official.

Mahlon Mitchell, the president of the Professional Firefighters Association of Wisconsin, did speak. Mitchell ran for lieutenant governor in the 2012 recall election and was said to be considering a run for governor next year.

But Wisconsin Democratic Party spokesman Brandon Weathersby said Mitchell confirmed with party leaders before his remarks that he would not be running for governor.

Republicans have needled Democrats for their lack of a candidate, saying it shows the strength of Walker’s candidacy.

"Wisconsin Democrats are in disarray, with no agenda for hard-working Wisconsin families," said Alec Zimmerman, spokesman for the Republican Party of Wisconsin.