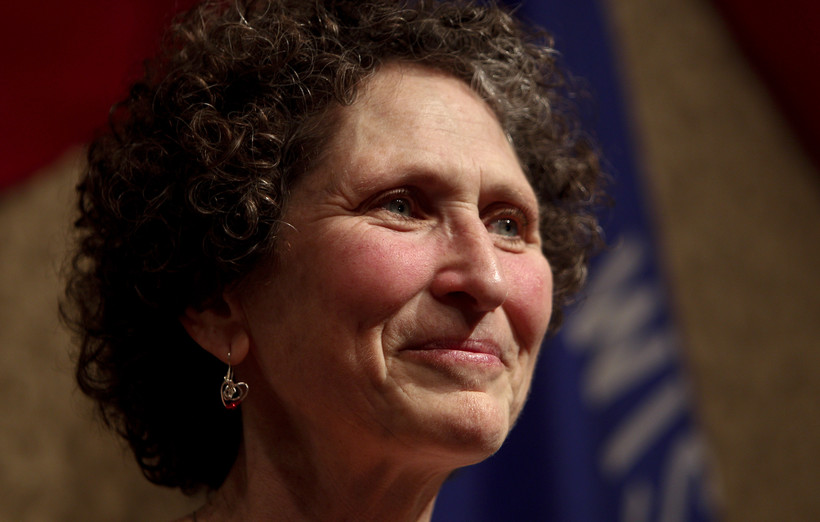 Joanne Kloppenburg unsuccesfully ran for the Supreme Court in 2011.

Kloppenburg Touts Her Impartiality, But Sends Partisan Signals On The Campaign Trail

JoAnne Kloppenburg could say nothing at all in her Supreme Court campaign, and there would still be some Democratic voters who know she's their candidate in Tuesday's election.

Both the appeals court judge and her opponent, Supreme Court Justice Rebecca Bradley, say they would carry out their duties without bias if elected next Tuesday. At the same time, the candidates are sending partisan hints to their likely supporters in this officially nonpartisan race.

For Kloppenburg, this is her second try for the high court. She ran her first campaign in 2011, when the election got hyper-politicized, swept up in the fight over Gov. Scott Walker's collective bargaining law. It put so much focus on the Supreme Court race that civil rights leader Jesse Jackson came to Wisconsin for get-out-the-vote rallies the day before the election.

"When we vote tomorrow, we make Dr. King happy," he said.

Kloppenburg's explicit message in 2011 was the same as it is now: She's running for the court because she's impartial. But at nearly every campaign stop this year, she also takes shots at Walker and Bradley.

"Clearly, I think she's signaling that unless you want somebody on the bench who's simply going to do what the Republicans want her to do, you want me," Geske said.

There's nothing explicitly partisan about Kloppenburg's biography, but there's a lot that liberals might like in the stuff she highlights. Kloppenburg served in the Peace Corps and she prosecuted environmental cases with the state Department of Justice.

When asked to name a decision she authored that that demonstrates her judicial philosophy, Kloppenburg mentions State v. Crute, a case involving citations the state had issued to protesters singing in the state Capitol in 2013. Kloppenburg ruled in favor of anti-Walker protesters in that case, which was a blow to the governor's administration.

Kloppenburg has also donated money to Democrats and is supported by Democratic-leaning groups like unions and the Wisconsin Association for Justice, which represents trial lawyers. Association past-president Christine Bremer Mugli said Kloppenburg has the "intellectual backbone" for the job.

"She will have an open mind and will be thorough and will be prepared and will not be partisan in her decision-making," Bremer Mugli said.

On the U.S. Supreme Court, Kloppenburg said she admires justices Ruth Bader Ginsburg and Sonya Sotamayor, who were appointed by Democratic presidents. During a recent debate, Bradley said that sent a negative signal that Kloppenburg would let her personal feelings influence her decisions.

"My opponent has a judicial philosophy that is starkly different from mine, that will allow her to introduce her personal policy preferences and the type of outcome that she wants to achieve into her judicial decision-making," Bradley said.

While Kloppenburg disputed that, she focused her response — as she has all year — on bringing it back to Bradley's background.

In debates and elsewhere, Kloppenburg has said very little about how she would have decided some of the big cases that have come before the Supreme Court, from Act 10 to voter ID.

But in-between the subtle and not-so-subtle hints this campaign, voters may have an easy time connecting the dots.