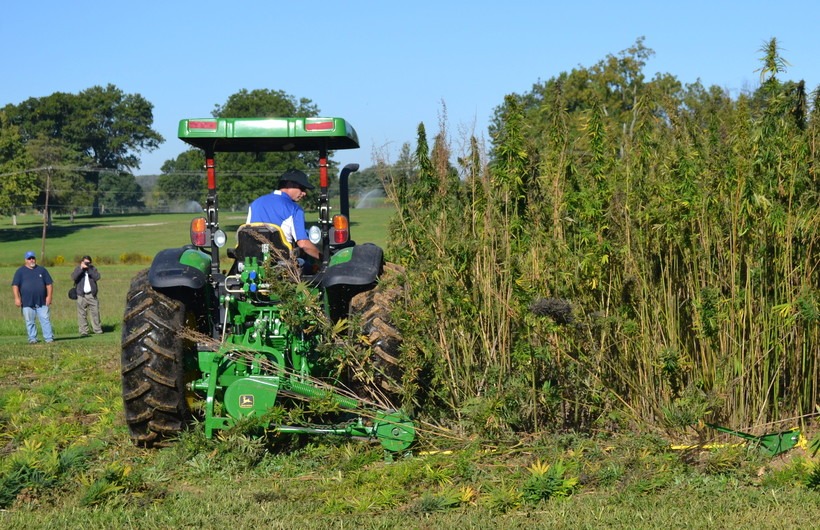 In this Sept. 23, 2014, file photo, a tractor cuts a small plot of hemp at a University of Kentucky research plot near Lexington, Ky. Dylan Lovan/AP Photo

Hemp Groups Say Federal Regulation Could Mean Lower Costs For Farmers But Questions Remain About How USDA Would Test Crops For THC
By Hope Kirwan
Share:

Amid a dramatic decline in hemp growers and program funding, the state Department of Agriculture, Trade and Consumer Protection is considering whether to end Wisconsin’s hemp program in favor of federal regulation.

On a call with reporters last week, DATCP Secretary Randy Romanski said the agency is in the process of considering whether to relinquish regulation of hemp growers in the state to the U.S. Department of Agriculture.

The 2018 federal farm bill allows states to license and regulate hemp production with approval from USDA. Like many states that created hemp pilot programs, Wisconsin is still operating under the 2014 farm bill rules until the end of the year.

"Our state, as part of (the USDA’s) process, has to certify that we have the financial and staff resources to support the ongoing implementation of the hemp program," Romanski said.

He pointed to a Legislative Fiscal Bureau report from June that found the state's hemp program was expected to end the year with a negative balance of more $450,000.

The overspending comes from a continued increase in operation costs while the number of growers registering and paying associated fees dropped by 56 percent this year when compared to 2020.

DATCP officials said in the report that the agency has continued to incur program development costs because of evolving federal regulations.

The report summarized the program's funding struggles for the state Legislature's budget committee, which was considering whether to appropriate funding for three hemp-related DATCP positions that were set to expire in the previous state budget.

DATCP officials stated in the report that the positions are "essential to core hemp program operations" and if the positions were not renewed in the next biennial budget, the agency "would need to strongly consider relinquishing control of hemp regulation duties to USDA."

The Legislature did not provide funding for those positions. And Rob Richard, president of the Wisconsin Hemp Alliance, said lawmakers' unwillingness to provide general purpose revenue dollars for the state’s hemp program makes the dramatic drop in grower registration fees even tougher to take.

"(Lawmakers) want program revenue dollars to make the program work and it's not working," Richard said. "So I think the secretary is being backed into a corner here, that he has to make a decision here very quickly."

Richard said he doesn’t think having USDA regulate growers would be a bad thing for the state’s industry, especially because the federal agency does not charge an annual registration fee to growers.

He said current federal regulations essentially require states to mirror the USDA program at their own expense.

"I think you could make the argument that maybe there might be some better customer service, maybe some farmers feel more comfortable working with DATCP versus the USDA," Richard said. "But to counter that argument, you also have farmers throughout the state of Wisconsin that through USDA programs, they work with their county (Farm Service Agency) officer all of the time anyway."

The "customer service" piece is also what FL Morris is most concerned about. She’s treasurer and a founding member of the South Central Wisconsin Hemp Cooperative.

In addition to fewer fees, Morris said the federal program is attractive to growers because it requires significantly less paperwork.

But she said how the USDA goes about sampling and testing crops for THC, the psychoactive component that distinguishes marijuana from hemp, will ultimately determine whether a federally-run program is good for growers like herself.

"Will they be able to get on to farms when we need them to and take those samples, get us those test results back in a timely fashion? Or is it going to be a little bit of a nightmare like it was in the first couple of years of the state program?" Morris said.

Morris said DATCP has improved their sampling response greatly in recent years after struggling to test fields on time during the 2019 growing season.

She said one factor that could help with that is the significantly smaller number of growers operating in the state. Morris said prices for hemp have dropped in the last two years, causing many small-scale growers in the state to pause production.

"Unless the market significantly improves and lots of smaller growers get back into the game, it's not as big of a project, I guess, for the USDA to take on than it was for Wisconsin in 2019," Morris said.

But Richard said the decline in grower numbers isn’t surprising given the infancy of the industry in Wisconsin and nationally.

As more states see a decline in hemp production after initial interest in the crop peaks, Richard said he expects other states to be making the same calculations about whether growers would be better served operating under the USDA’s regulation.