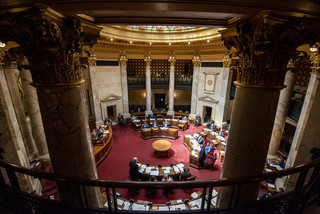 The state Assembly voted along party lines Tuesday to advance a controversial proposal that would limit how race and racism are taught in elementary, middle and high schools across Wisconsin.

Under the Republican-backed plan, teachers would be barred from giving lessons that convey that one race or sex is superior to another and that "an individual, by virtue of the individual's race or sex, bears responsibility for acts committed in the past by other individuals of the same race or sex."

The proposal follows a national trend of GOP legislators advancing bills on the state and national levels that they say are aimed at protecting students from harmful and divisive lessons about racism.

"We don't want schools to be misleading students and teaching things that they — perhaps a teacher — wants them to hear, as opposed to what is facts," said state Rep. Jeremy Thiesfeldt, R-Fond du Lac, in a pre-session press conference.

The bill's author, state Rep. Chuck Wichgers, R-Muskego, said the proposal was meant to give recourse to parents who felt education was crossing a line.

"We need the ability to hold our public schools accountable, taxpayer-funded schools accountable, when they cross those lines that the teachers say they're not crossing," said Wichgers. "The law is clear: you cannot teach my child something that is against the values we teach at home as a fact, when it is theoretical, philosophical, religious. You can't do that."

Since the plan's introduction in Wisconsin and during public hearings on the measure at the state Capitol, lawmakers and advocates have clashed over the measure, with some arguing it's unnecessary and could have a chilling effect on important teaching about systemic racism in the United States.

The bill also prohibits school districts and independent charter schools from requiring employees to attend any training that includes any of the concepts outlined in the bill. School boards or private school operators that oversee teachers who violate the proposed restrictions would lose 10 percent of their state funding. Parents or guardians of students could file claims against school districts that don't follow the provisions set out in the bill.

"This is a Republican attempt to defund education by usurping local district policies and entangling school districts, as well as independent charter schools, in lawsuits based solely on opinion and not fact," said state Rep. Lakeshia Myers, D-Milwaukee, in a press conference before the vote.

Myers pushed back on Republican rhetoric around critical race theory when the bill came up on the Assembly floor.

"Critical race theory is ... derived by lawyers to talk about intersectionality of people and how we can interrogate the law," said Myers. "That's not something that's taught in a K-12 classroom. Just doesn't happen."

During debate, state Rep. Jimmy Anderson, D-Fitchburg, said the bill was one example of Republicans "using the government to squash dissent." He said the party's hesitance to discuss matters of race and racism spoke to the need for teaching about racism's effect on the country's institutions and systems.

"You're using the government to enforce laws that will punish people who say things that you don't like, which is a real kick in the pants for the First Amendment," said Anderson. "What you claim to be foundational to your values and character just feels like a shifting mishmash of grievances that could barely support the air that leaves your lungs and sometimes not even that."

A similar bill that also came up for a vote Tuesday would place the same limits on anti-racism and anti-sexism for state and local government employees. Under that plan, state agencies or local governments that violate the training limits would face an immediate state funding reduction equal to 10 percent of their funding in the previous year. That bill also passed along party lines.

Neither of the bills have been voted on in the state Senate. If approved by both chambers of the Legislature, they could be vetoed by Gov. Tony Evers.

The Assembly also approved a resolution that would set a state policy that Wisconsin’s next set of political district maps "retain as much as possible the core of existing districts." That vote also came down along party lines.

Republicans have said the proposal is aimed at increasing transparency at the outset of the Legislature’s work on new maps.

"The resolution before us ... kind of reiterates what basically a hundred years of precedent have put forward," said Assembly Speaker Robin Vos, R-Rochester. "It's also important to say to the public, what are the things that we think are important, the criteria that we will utilize to be able to judge maps as they come in to make sure that we have one that does follow all of the constitutional requirements, while at the same time making sure that we have a minimalization of the idea that we don't want to disenfranchise people, which is really what a huge shift would do."

The redistricting process, which takes place every 10 years, began in earnest last month with the release of federal U.S. Census Bureau data. Since then, several lawsuits have already been filed over Wisconsin’s next set of maps. Last week, the state Supreme Court agreed to take one case, while Republicans appealed to the U.S. Supreme Court to halt another.

Democrats were quick to criticize the resolution, which was unveiled last week, because they have argued for years that Wisconsin’s existing maps are gerrymandered and unconstitutional.

"This latest resolution is just more of the same, trying to cling to power and saying anything you can in order to come up with a justification for doing that," said state Rep. Mark Spreitzer, D-Beloit. "People should choose their elected officials, not the other way around."

"In all this talk about packing and cracking, what is really cracking is our faith in the institution that we have all sworn to uphold," said Andraca.

A federal lawsuit about Wisconsin’s current maps went all the way to the U.S. Supreme Court before being dismissed after a ruling in a similar case.

Other bills Assembly lawmakers took under consideration Tuesday would: