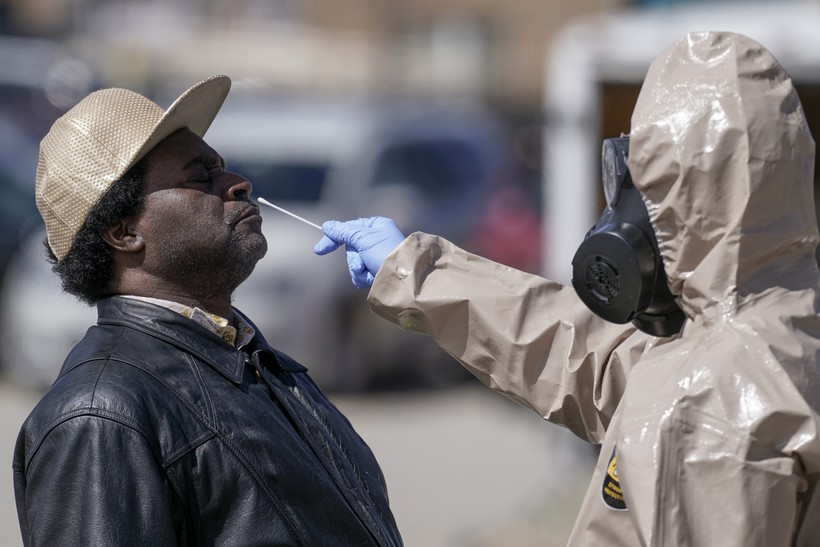 The Wisconsin National Guard has collected more than 23,000 tests for coronavirus as it supports health officials' efforts to increase testing capacity statewide. Despite those efforts, several rural Wisconsin areas have collected fewer tests than they had hoped at community testing sites.

Recent mobile testing sites were part of an effort to expand access to testing in northwestern Wisconsin. The Wisconsin National Guard now has 25 teams working at sites across Wisconsin — up from three in March.

Community testing at sites in Madison and Milwaukee drew thousands of people who waited in lines for hours on Monday. However, less densely populated rural areas where the disease is less prevalent have not seen the same influx of people at testing sites.

Kathy Ronchi, Douglas County public health officer, said they had a goal of testing 300 people at a drive-thru testing site with the National Guard in Solon Springs. Instead, she said they tested 171 people with symptoms of COVID-19 — all of which came back negative.

Ronchi said there might have been confusion over who could get tested.

"I heard from a lot of people that they felt they weren't sick enough to be tested even though we were saying that mildly ill people were definitely welcome," she said.

Laura Sauve, Barron County health officer, said she and community partners might have encountered similar issues. Barron and Polk counties partnered with the St. Croix Chippewa Indians of Wisconsin to host a two-day community testing site with the National Guard in Turtle Lake. Sauve said they hoped to collect 200 tests daily, but they conducted around half that each day.

She said people might still be following earlier guidance from health officials that urged those with mild symptoms to stay home due to a lack of tests.

"Maybe we need to get that information out a little bit stronger to people that it's available, come and get tested if you have any symptoms," said Sauve.

She added that travel might also have been a factor because the testing site was on the edge of two counties. Still, she said people from 11 other counties showed up to the Barron County site for testing.

"We like to think that maybe people aren't having symptoms so there aren't as many people to test out there, but we just don't know that for sure," she said.

Ronchi would like to see testing expanded because two of the county's 12 confirmed cases never exhibited symptoms of the disease.

"For that reason, I would support (testing) at least certain populations, if not everybody, maybe high-risk individuals, older people, health care workers, first responders, those types of people that maybe have more interaction with vulnerable people," said Ronchi.

Ashland County administrator Clark Schroeder would also like to see more testing, especially for personnel within about a dozen volunteer emergency services in the area. While restrictions on testing have loosened, he realizes tests are still limited.

"If we had enough tests to test nursing homes and dentists' offices and everybody going to the hospital and every inmate, I think that would be wonderful," said Schroeder. "But I don't see that happening in the short term."

Ashland County partnered with the Bad River Band of Lake Superior Chippewa to conduct testing in Ashland with about 300 kits on hand. About 150 people completed testing at the site. Results that have been returned so far have been negative for the coronavirus, and health officials say the findings indicate that social distancing is working.

Gov. Tony Evers said he wants to make Wisconsin one of the top states in testing per capita and is working to provide 85,000 COVID-19 tests per week. The state has met a key metric outlined in the governor's "Badger Bounce Back" plan that shows the percentage of positive cases has declined over a 14-day period.

Late Wednesday, the Wisconsin Supreme Court struck down the state's stay-at-home order, effectively reopening the state immediately. Now, it will fall to local governments to decide whether they want to put in place any restrictions on gatherings, business or travel in an effort to limit the spread of COVID-19.

Officials with the Wisconsin Department of Health Services (DHS) said they now have the ability to process just under 14,000 tests daily. But so far, the state is less than half-way to its goal of testing 12,000 people each day.

In a call with reporters Tuesday, DHS Deputy Secretary Julie Willems Van Dijk said a few weeks ago the state was conducting an average of 1,500 to 2,000 tests per day. Now, she said that has more than doubled and expects numbers to grow further as the National Guard continues work at mobile testing sites.

"Slowly, but surely, we will get there," said Van Dijk.