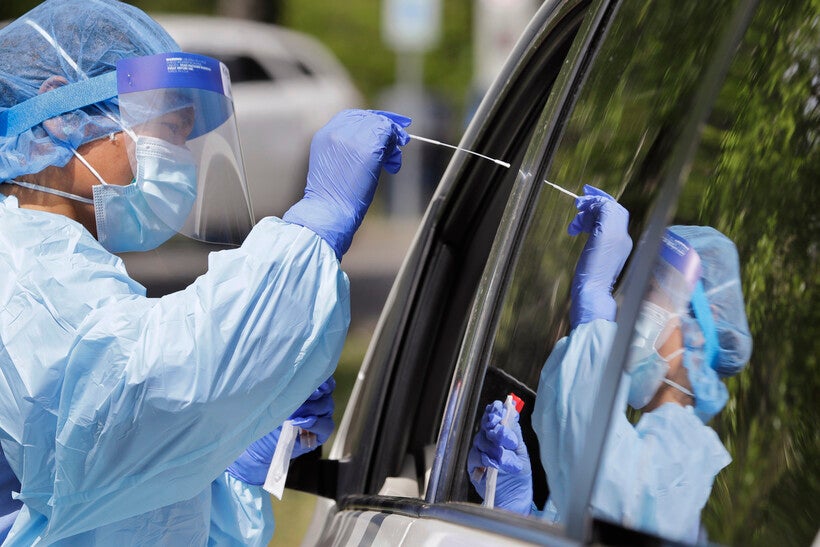 Medical assistant Melanie Zamudio is reflected in the window of a car as she reaches in to take a nasal swab from a driver at a drive-up coronavirus testing site Wednesday, April 29, 2020, in Seattle. The site, open Wednesdays and Saturdays from 10 a.m. to 3 p.m. in the Rainier Beach neighborhood, is available to anyone displaying the virus symptoms, are pregnant, over 60 or have a chronic condition, as well as health care workers and first responders. Elaine Thompson/AP Photo

Roughly 300 Tests Will Be Administered A Day At Each Testing Site
By Alana Watson
Share:

Community testing for COVID-19 is underway in northwest Wisconsin.

Northwest Wisconsin has reported having a lack of access to testing since the pandemic hit the state.

Gov. Tony Evers announced on May 1 that the Wisconsin National Guard would be sending troops to testing locations to help administer tests with local health departments.

"Taking our lab capacity from the ability to perform zero COVID-19 tests in early March to more than 11,000 tests per day now is one of our success stories here in Wisconsin," Evers said in a statement. "But capacity is not the same as utilization, so we have some work to do to ensure everyone who needs a test is getting one and to understand the full scope of this disease around Wisconsin."

"In about a week or so we are expecting to have 25 specimen collection teams set up to operate really all across the state," Travto said.

Trovato told WPR that nearly 400 citizen soldiers will be administering tests in northwest Wisconsin until May 14. Each specimen collection team has roughly 30 members and teams have been training for months. 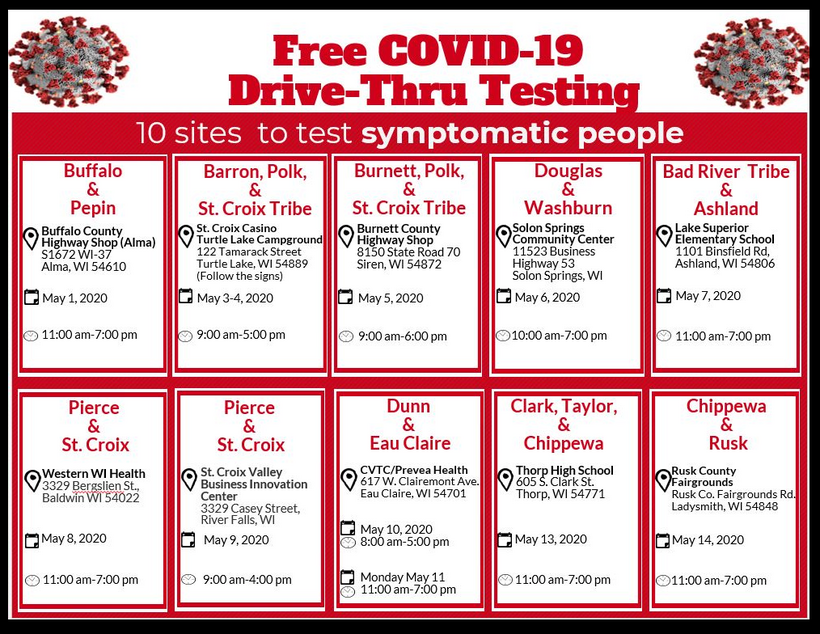 "It’s something that we can offer as a resource to the state and communities that don’t necessarily have the resources to be able to pull off this kind of testing easily," Trovato said.

National Guard troops are equipped with military issued gas masks and Tyvek suits when they're at testing sites.

"We actually aren’t depleting any civilian stockpiles of ... personal protective equipment, and we are simultaneously using extremely good protection for our service members," Trovato explained.

National Guard troops are also being monitored medically on a daily basis for COVID-19 symptoms by having their temperatures taken and answering screening questions.

Drive-thru testing started in Buffalo and Pepin county on May 1 and will continue through multiple counties ending at Chippewa and Rusk county on May 14.

Ashland County administrator Clark Schroeder told WPR that each testing site will have roughly 300 tests per day. Testing will begin in the area on May 7.

"It’s my understanding they can do 70 per hour so it’s a relatively quick test," Schroeder said. "Results will be back anywhere between 24 and 48 hours and if people are positive, they will be contacted."

Testing is for any resident over 5 years old who has symptoms of COVID-19 like a cough, sore throat, headache, fever, shortness of breath, fatigue, etc.

Schroeder said that Ashland County is offering drive-thru testing for people who are showing symptoms but aren’t sick enough to go to a walk-in clinic or their regular doctor’s office.

"This will basically allow people who are probably more curious about their symptoms. Do I have this? I think it’ll help them be more aware of how to protect themselves and how to protect other people around them," Schroeder said.

Schroeder used the example of a person living at home with family, and they have a cough. They can go get tested as a precaution. If they test positive, they’ll be able to take the right steps to help reduce the spread of the virus.

According to the governor’s office, more testing sites will be announced in the coming days.

During a briefing Tuesday, Wisconsin Adjutant Gen. Paul Knapp said a total of 750 national guard soldiers and airmen are collecting samples from community testing sites and facilities like nursing homes and meatpacking plants where outbreaks have occurred.

"We have ongoing testing sites set up at multiple locations in Milwaukee, at the Resch Center in Green Bay, at factories and food processors in Racine in Grant County," said Knapp. "Just today, we established another site at a meat packing plant in Kenosha County, another community-based testing site in Burnett County and another factory site in Crawford County."

Knapp said as of Monday afternoon more than 7,500 specimens have been collected.