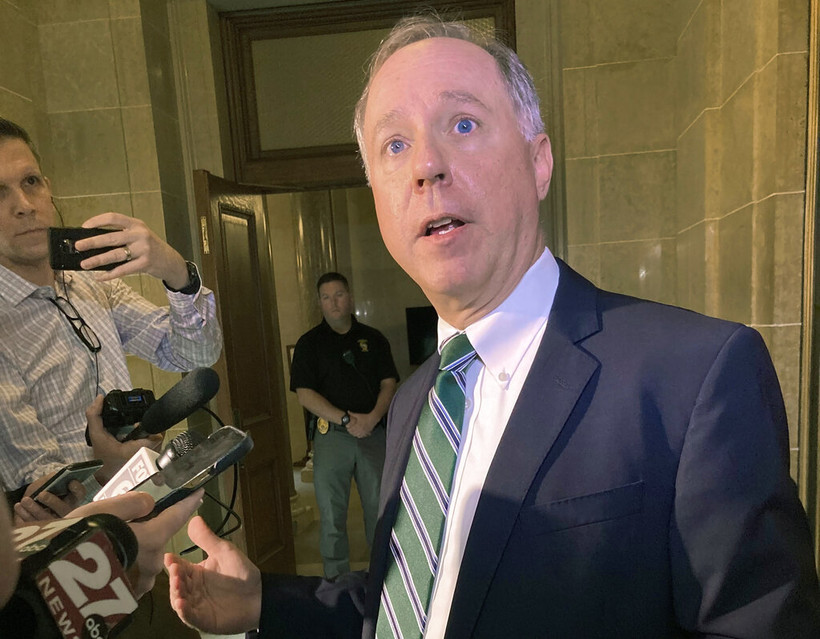 Wisconsin Republican Assembly Speaker Robin Vos tells reporters after a meeting with advocates for decertifying the 2020 election won by President Joe Biden, that his mind was not changed and that it is impossible to undo Biden's win on Wednesday, March 16, 2022, in Madison, Wis. Scott Bauer/AP Photo

The powerful speaker of the Wisconsin Assembly met Wednesday with Republican activists who want to overturn the state's 2020 U.S. presidential election, but he said afterward that he still believes such a move would be legally impossible.

Assembly Speaker Robin Vos, R-Rochester, hosted the meeting at the state Capitol, later telling reporters that he was open to hearing from people who have a different opinion. But Vos remained unswayed by the argument that the state could erase President Joe Biden's electoral victory in Wisconsin, a contest he won by almost 21,000 votes.

"I still believe that the Constitution and my oath that I took as an elected official does not allow me to decertify any election whether I want to or not," Vos said. "That's not going to happen."

Vos' position, which is broadly supported by election law experts and the state Legislature's own nonpartisan attorneys, has earned him some enemies in at least a segment of the GOP base.

That has been at least partly driven by former President Donald Trump, who has continued to falsely assert that he won Wisconsin and other battleground states in 2020.

Biden's victory over Trump was affirmed by a partial presidential recount, multiple state and federal court rulings and a review by the nonpartisan Legislative Audit Bureau. While the audit found several instances where the Wisconsin Elections Commission issued guidance that should have received the Legislature’s approval first, it didn't uncover widespread fraud.

But the push among some Republicans to cast doubt on the election have continued, and arguably picked up steam, led in part by two people who were empowered by Vos.

The Assembly Committee on Campaigns and Elections has held repeated invitation-only hearings with people who claim the election was stolen, at one point taking testimony from a man once convicted of felony mail and bank fraud. Vos chose state Rep. Janel Brandtjen, R-Menomonee Falls, to chair the committee shortly after she claimed falsely that Trump had won the election.

Vos also hired former state Supreme Court Justice Michael Gableman to lead an investigation of the 2020 election as a special counsel for the Assembly and recently renewed Gableman's contract through at least the end of April. Gableman issued a report earlier this month that called on state lawmakers to consider decertification, giving the idea new life.

But even when Vos has taken a different approach, it has emboldened his critics in the Republican base.

Earlier this year, he took away a legislative staff member from state Rep. Tim Ramthun, R-Campbellsport, after Ramthun repeatedly released videos from his state Capitol office criticizing Vos for not doing more to overturn the election. While the move was backed by other GOP lawmakers, Ramthun used it to help launch a campaign for governor.

Ramthun, whose resolution to decertify the election went nowhere in the Legislature, tried to attend Vos’ meeting with activists Wednesday, but he said Vos told him to leave.

Standing in the hallway outside of Vos’ meeting, Ramthun told reporters that he wanted to file charges against anyone who broke the law in the 2020 election.

"I think some of the people who are involved in it are in that room right now," Ramthun said. "I think there's people in that room that were involved that don't want to see closure on this. That's why they've been obstructing all along."

As the meeting ended, Jefferson Davis, one of the lead activists casting doubt on the election, praised Vos for agreeing to talk.

"Let me say this: Speaker Vos is a very gracious speaker," Davis said. "You can feel the way that you want to about him personally, that's a different situation. But we just had a very productive meeting."

Davis' comments were met with groans from some of the activists gathered outside the meeting. As Vos walked away, at least two shouted, "Toss Robin Vos!"

The speaker said most of the meeting had focused on voter fraud, which he told reporters had been "widespread." According to the Associated Press, 24 people have been charged with voter fraud statewide out of more than 3.3 million votes cast.

Vos said he believed the best way to restore trust in the election was to pass voting laws with the help of a new Republican governor in 2023.

Democratic Gov. Tony Evers is likely to veto most, if not all, of the voting bills Republicans passed recently. Evers' campaign sent out a fundraising appeal highlighting Vos' meeting with Republicans who want to undo the 2020 election.

"That means he's hearing out their wild, deranged conspiracy theories and for all we know acting on what they say," read the campaign's email.

When Vos was asked whether he thought the meeting Wednesday would grow support for the idea of decertification, he said everyone had a right to petition their government. But he didn't bend on the idea of retroactively trying to award Wisconsin's 10 electoral votes to Trump instead of Biden.

"(It's) never been done in the history of our country," Vos said. "We can't have a Legislature decertify an election."

Jefferson Davis, who organized the meeting with Vos, initially praised the speaker.

But he's now leading a presentation casting doubt on the 2020 election and has already attacked Vos for not doing enough to deal with it. pic.twitter.com/0HK9TwgZTB