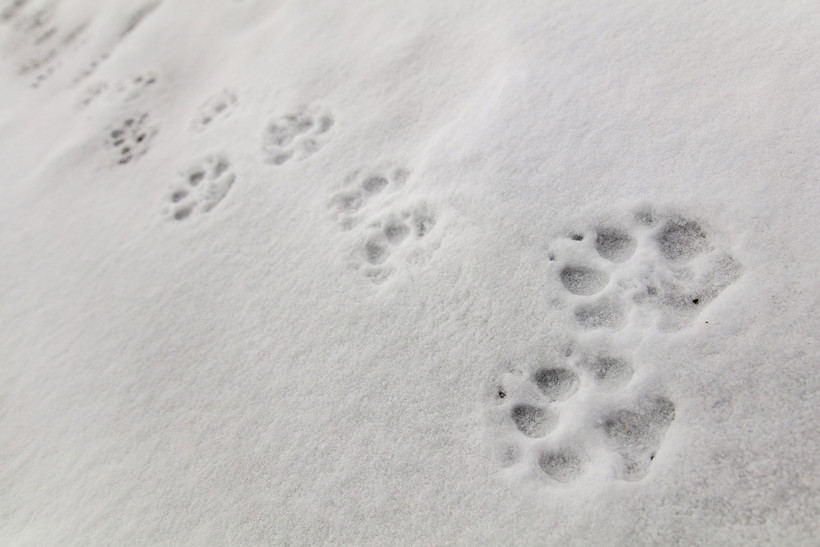 This Jan. 7, 2018, photo released by the National Park Service shows wolf tracks on Fountain Freight road in Yellowstone National Park, Wyo. Wolves have repopulated the mountains and forests of the American West with remarkable speed since their reintroduction 25 years ago, expanding to more than 300 packs in six states. Jacob W. Frank/National Park Service via AP

Opponents Urged State Not To Rush Wolf Hunt While Supporters Say Wolf Management Has Been Delayed Too Long
By Danielle Kaeding
Share:

Tribes, conservation and animal rights groups urged the state not to rush a hunt following the Trump administration's decision in October to delist the animal as an endangered species. The rule by the former administration went into effect this month. Lawmakers and hunters argued state law requires a wolf hunt when the animal isn't under federal protection, saying wolf management has been put off for too long.

Board members debated the law's requirement to hold a hunt and whether state wildlife biologists have sufficient science to set a quota to harvest wolves this winter. They also discussed whether the agency should update its wolf management plan and rules prior to a hunt, as well as the state's legal obligations to tribes in moving forward with a season.

Under state statute, the DNR is required to hold a single wolf hunting and trapping season from Oct. 15 through February when the animal is not listed as an endangered species.

The DNR announced in December it would resume the state's wolf hunt in November. The agency said it needs more time to develop a science-based harvest quota, gather input from tribes and update its wolf management plan. The plan, which was approved in 1999 and updated in 2007, set a goal of 350 wolves for the state. That figure was based on population projections far below the more than 1,000 wolves documented in the state's most recent count.

"We stand by where we're at," said DNR Deputy Secretary Todd Ambs. "We have to do this in a transparent, inclusive, science-based process, which will take a number of months to be able to have a hunt in November."

Some board members expressed frustration with the department for not updating the state's wolf management plan prior to the delisting, including chair Fred Prehn and vice chair Greg Kazmierski.

"To me, we're not fulfilling our duty as an agency if we're not complying with that management plan," said Kazmierski.

Board member Marcy West questioned whether a hunt would be worth risking the state's relationships with tribes and other organizations, as well as state management of the wolf.

"I just really have a concern that we have to prove right now that the state is credible in managing the population," said West.

Much of the concern discussed by the board revolved around the state's obligations to Wisconsin tribes.

Representatives of the Red Cliff, Menominee, Lac Courte Oreilles, Bad River and Lac du Flambeau tribes urged the board not to hold a wolf hunt this winter. Several referenced a 1983 court ruling known as the Voigt Decision that affirms tribal rights to hunt, fish and gather in ceded territory under treaties with the federal government. Under the ruling, the state must consult with tribes on natural resource management.

"In making any decision about wolves, the department must abide by the requirements to consult and collaborate with the tribes as set forth in court decisions and agreements," said Mic Isham, executive administrator with the Great Lakes Indian Fish and Wildlife Commission.

Tribal officials said the hunt would have a detrimental impact on the wolf population in Wisconsin. Tribal members, including Red Cliff tribal elder Marvin Defoe, said they view the wolf as a brother and that the animal is significant to their cultural and religious practices.

"If we hold the hunt now, without doing the work needed to prepare, and without the critical consultation with our tribal partners, we will simply feed the arguments that states cannot be trusted to manage wolves," said Clark. "And, I believe we will make another federal injunction more likely."

Groups like Midwest Environmental Advocates, the Humane Society of the United States and Center for Biological Diversity also alluded to potential legal ramifications the state may encounter by holding a hunt this winter.

"The agency must revise its regulations to come into compliance with statute prior to implementing any wolf hunt, and may not legally establish a season that begins in January or February," said Megan Nicholson, Wisconsin state director of the Humane Society of the United States. "Opening an immediate trophy hunting season is scientifically unsupportable."

Lawmakers and hunting groups urged the state to hold a hunt this winter after a coalition of environmental and wildlife groups filed a lawsuit last week to reverse the Trump administration's decision to delist the wolf.

"We may not have that opportunity to manage the wolf population again in the near future," said Sen. Rob Stafsholt, R-New Richmond.

More than 100 scientists have argued wolves should be protected because they haven't recovered to their historic range across the nation while the population in the western Great Lakes region has expanded to more than 4,400 wolves in Wisconsin, Minnesota and Michigan.

Wisconsin Republican U.S. Reps. Tom Tiffany, Mike Gallagher and Glenn Grothman have introduced a bill in Congress to permanently remove the gray wolf from the federal endangered species list. Tiffany told the board that wolves are harming pet owners and farmers in central and northern Wisconsin.

"Farmers are hit hard by wolves, not so much the depredation, but the disruption that happens to herds and things like that reducing production," said Tiffany.

WPR has previously reported that wolf conflicts have resulted in the DNR paying at least $2.5 million in damage payments to hunters and livestock owners over the last three decades.

The Wisconsin Wildlife Federation, Wisconsin Bear Hunters Association and the Wisconsin Association of Sporting Dogs urged the state to resume the hunt this winter. Matt Lallemont, a Chippewa Falls resident, feared that continually revisiting the state's wolf management plan would allow the population to increase, which he said is irresponsible.

"We continue to have a negative view of the species itself in the northern portion of state because, quite frankly, we have to live with (wolves) and without being able to manage them," said Lallemont.

A 2014 DNR survey showed most residents supported a wolf hunting and trapping season and that residents' attitudes toward wolves were more favorable than not. But, there was more support for the animals outside its range in northern and central Wisconsin.

Hunters in Wisconsin killed 528 wolves in the three seasons a hunt was held in the state before a federal judge ruled in 2014 that the animal should be placed back on the endangered species list.