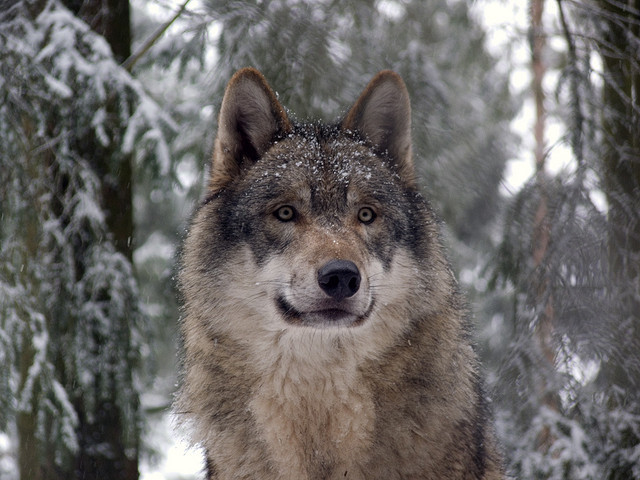 Wisconsin has had a wolf hunting and trapping season for the past two years. Photo: Gunnar Ries (CC-BY-NC-ND).

Wisconsin wildlife officials said that major changes are afoot for wolf hunters after a federal judge's decision Friday to place Great Lakes gray wolves back on the endangered species list.

U.S. District Judge Beryl Howell's order affects Michigan, Minnesota and Wisconsin. The ruling — which could still be overturned or stayed upon appeal — bans further wolf hunting and trapping in those states.

After the judge’s ruling, the Wisconsin Department of Natural Resources issued a news release on Friday evening that detailed the implications of the decision. DNR officials said that existing permits allowing the killing of wolves that were issued to landowners are no longer valid.  Officials said that they would contact these permit holders to alert them.

In addition, DNR officials said Wisconsin’s law that allowed private landowners or occupants of that land to shoot wolves that are attacking domestic animals “is no longer in force,” people can’t use dogs to track and train on wolves and state officials are unable to plan a wolf harvest season.

DNR officials said that while they’re no longer authorized to use “lethal control” as part of the state’s wolf management program, “non-lethal tools” and depredation compensation remain available. They said those experiencing conflicts with wolves should contact the U.S. Department of Agriculture – Wildlife Service for more information.

DNR officials said that while they were disappointed by the judge’s decision, they would continue to support USFWS and their original decision to delist the Great Lakes gray wolf. They said they remained confident in the state’s ability to manage the wolf population.

A state Department of Justice spokeswoman said Friday that agency is still reviewing the court’s decision.

Jodi Habush Sinykin, an attorney for Midwest Environmental Advocates, which supports science-based wildlife management, said the decision should serve as a clear signal of caution to people who would destroy the nation's wolves.

Melissa Tedrowe of the Humane Society of the United States said the ruling sends strong message to Midwest states about how they have handled wolf hunting.

“They haven’t held to their promise of conserving the species. Instead their focus has been trapping and sport hunting, and managing wolves down to the smallest possible numbers,” said Tedrowe.

A spokesman for the Conservation Congress, a group of sportsmen who advise the DNR on policy, didn't immediately return a message.

For information about depredation compensation, the DNR said the USDA Wildlife Services can be reached at 800-228-1368 in northern Wisconsin or 800-433-0663 in southern Wisconsin.