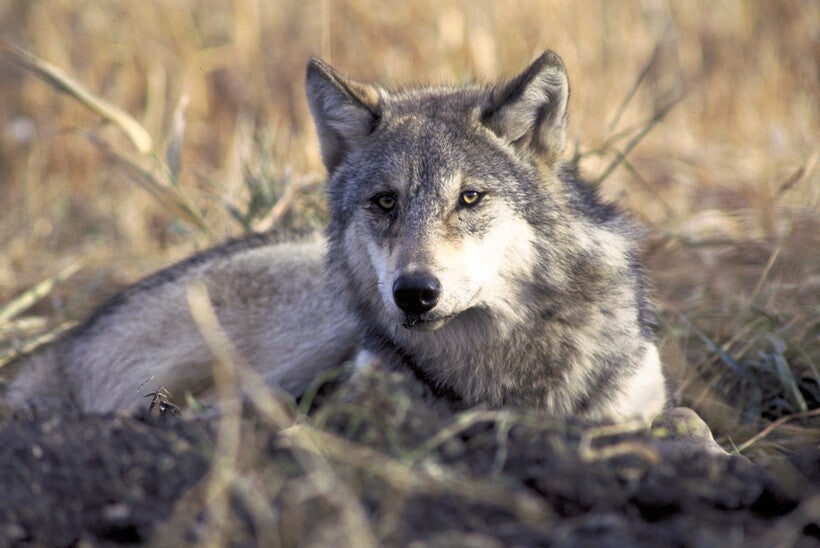 Wolf Delisting Expected To Take Effect In January As Groups Vow They Will Sue To Block The Change
By Danielle Kaeding
Updated:
Friday, December 4, 2020, 4:50pm
Share:

The Wisconsin Department of Natural Resources says it will resume Wisconsin’s wolf hunt next November.

U.S. Interior Secretary David Bernhardt announced in October that most gray wolves would be removed from the federal endangered species list across the lower 48 states. The U.S. Fish and Wildlife Service is expected to officially remove protections for gray wolves in January, returning wolf management to states and tribes.

Environmental groups have already notified the agencies they intend to sue to block the change from taking effect. They argue wolves haven't recovered to their historic range across the nation and that federal wildlife officials failed to use the best available science in their decision-making.

State law requires Wisconsin’s wolf hunt to take place when the gray wolf is no longer listed as an endangered species. When not listed as endangered, wolf hunt season typically begins the first Saturday in November and runs through the last day of February.

However, the DNR said Friday that more time is needed to develop a science-based harvest quota and engage the public on the development of a new wolf management plan, said Keith Warnke, administrator of fish, wildlife and parks for the DNR.

"We just decided that we need to work collaboratively with an immense array of partners, and we want to be transparent about taking input on a season," said Warnke. "We want to have plenty of an application period for people so that people who do want to hunt them have a chance to apply."

Warnke said the decision will also give the DNR more time to acquire biological information about wolves over the winter, as well as time to consult tribes about their input on the wolf hunt. He added that the decision gives the agency more time to gather and submit information on a harvest quota to the Natural Resources Board for approval.

Wisconsin's wolf population grew 13 percent in the most recent count to more than 1,000 wolves, according to state data. The state once had as many as 5,000 wolves before they were hunted nearly to extinction, according to the Wisconsin Department of Natural Resources.

Arnold Groehler, president of the Wisconsin Trappers Association, said he feels the DNR is making the right decision to take more time "to do it right" rather than risk rushing a wolf hunt. However, he noted not all of the group’s roughly 3,000 members feel the same way.

"Some members feel strongly that there should have been a wolf season for several years now, because there are quite a few wolves, especially in the northern part of the state," said Groehler. "They are ready to start trapping right now."

Groehler highlighted the uncertainty and confusion that could stem from holding a wolf hunt amid legal challenges to the delisting and subsequent court rulings that could impact the season.

"When we do have it, make sure it's the law, and it's not going to be stopped a week later or something like that," said Groehler.

But, Matt Lallemont, an associate director with the Wisconsin Wildlife Federation, said he's disappointed with the DNR's decision. He said multiple wildlife, sporting and farm organizations have contacted the state requesting that the agency's wolf advisory committee meet to prepare for the wolf's delisting.

Rachel Tilseth, wolf tracker and founder of Wolves of Douglas County Wisconsin, said she’s glad to hear the DNR is holding off on a wolf hunt.

"I oppose a recreational hunt on wolves because we have to take a look at the species and manage the species for its health," she said.

She would like to see an updated wolf management plan that includes broad public input along with an updated survey on public attitudes toward wolves.

"People are living alongside wolves, and they have problems with wolves attacking livestock and animals," she said. "How are we going to mitigate that?"

The DNR plans to update its current wolf management plan before holding a wolf hunt. The current plan is more than two decades old and was last updated in 2007, according to the agency.

The 1999 wolf management plan set a goal of 350 wolves for the state, but that figure was based on a projected population of 500 wolves across Wisconsin.

The agency also plans to create a new wolf management committee that will be made up of members from government agencies, tribes and conservation groups.

The DNR stressed it’s illegal to kill a wolf unless an immediate threat to public safety exists with limited exceptions once the delisting takes effect outside the wolf hunting and trapping season. Once delisted, Warnke said it would be legal to kill a wolf that's attacking livestock or domestic animals. People are required to report such instances to the agency.

Farmers and hunters have urged lawmakers to delist the gray wolf as they’ve lost animals or pets due to wolf encounters. The DNR has paid at least $2.5 million in damage payments to hunters and livestock owners over the last three decades due to wolf conflicts.

At least 260 gray wolves have been killed illegally in Wisconsin since 1985, according to DNR figures.

A 2014 DNR survey showed residents' attitudes toward wolves were more favorable than unfavorable. Although, the survey found less tolerance for wolves across its range in northern and central Wisconsin. The survey also found most residents supported a wolf hunting and trapping season, which has drawn criticism from tribes and environmental groups.

Adrian Wydeven, a former DNR biologist, now serves as co-chair of the wildlife work group for Wisconsin's Green Fire. He said in a briefing on the report before the DNR's announcement that the group is proposing the agency maintain the wolf population.

"Until a new wolf conservation plan is in place, we encourage (them) to maintain the population near current levels, which are estimated to be between 866 to 1,034 wolves," said Wydeven.

He said it's important the wolf population not be drastically reduced until a new management plan is developed.

Fellow group member, Peter David, a wildlife biologist with the Great Lakes Indian Fish and Wildlife Commission, said during a briefing on the report that they're also making recommendations that the state have separate wolf committees and wolf stakeholder groups in the development of a wolf management plan.

"That's really in the best interest, I think, of the Wisconsin public," said David. "It also, frankly, I think, serves the tribes better to separate out some of the best science recommendations and those social recommendations and keep those distinct from each other until some sausage has to be made with them in the end."

The group is also recommending changes to state law to ensure the agency has authority over the wolf harvest and wolf management. They also want to ensure that tribal rights and interests are considered in management plans since the wolf is culturally significant to Wisconsin tribes.