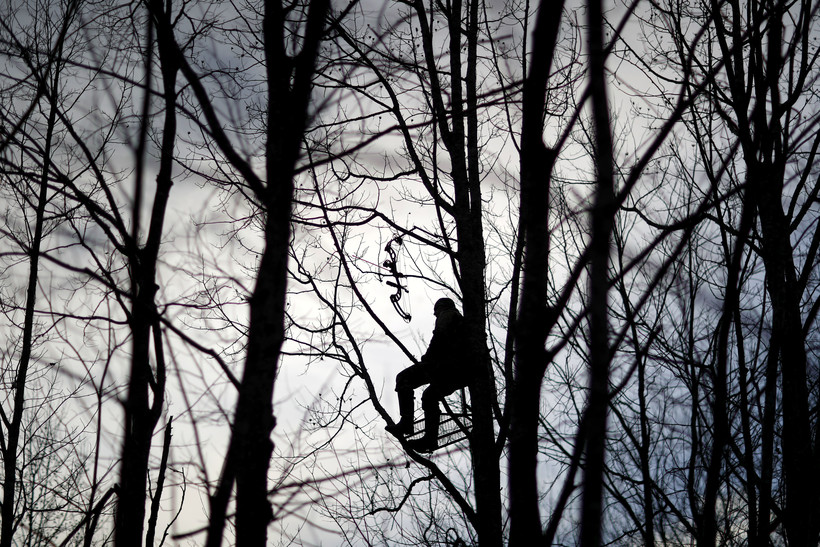 Dale Ferguson sits in a tree while hunting for deer with a bow and arrow in Isonville, Ky., Wednesday, Dec. 13, 2017. David Goldman/AP Photo

Saturday marks the beginning of archery and crossbow deer hunting, and the season extends through January
By Gaby Vinick
Share:

Archers will take to the woods this weekend for the beginning of the deer hunting season, and the Wisconsin Department of Natural Resources says more Wisconsinites are choosing bow-hunting.

"I'm super excited," said deer biologist Matt Esser in a DNR briefing ahead of the season opener. "There are many folks across the state that are really excited to get back out into the woods and start hunting deer again."

The bow-hunting season begins Saturday and runs through Jan. 8. The state's nine-day gun-deer season runs from Nov. 19 through Nov. 27.

Jeff Pritzl, DNR deer program specialist, said total license sales dropped by 2,000 in 2021. The state has seen a decline in total deer licenses — a 5.8 percent drop between 1999 and 2017, according to a Wisconsin Policy Forum analysis. But the number of deer licenses rose in 2020 as more people spent time outdoors during the pandemic.

In its 2020 deer hunting survey, the DNR reported that "archery and crossbow seasons saw the most activity with approximately 4.3 million hunter days," while "hunters spent about 2.6 million days in pursuit of deer."

Although there is a greater interest in archery and crossbow hunting, Pritzl said there are few changes for hunters going into the fall. Any changes tend to be in local deer-management units, he noted.

As for the health of deer herd, Pritzl reported a rise in deer population in the Northwoods.

The state has had relatively mild winters the last couple of years, which allows the population to ebb and flow, he said. Of course, that doesn't mean every hunter is guaranteed a buck or a doe.

"There are areas where there certainly is a desire for deer populations to be higher than where they are, and they are showing trends in growth," Pritzl said.

"Interestingly, we've seen our harvest results kind of stabilize over the last number of years, which reflects hunters' interest and access to the deer," Pritzl said.

Esser said that this weekend will see warmer temperatures, but the weather shouldn't discourage hunters. Offering some tips, he suggested hunters arrive at the scene early and late in the evening.

"Deer are very predictable this time of year," he said. Apples, plums and hazelnuts are some food sources Esser suggested spotting. "If you can focus in on those key food sources, and then find out where the deer bedding is, you can hunt in between."