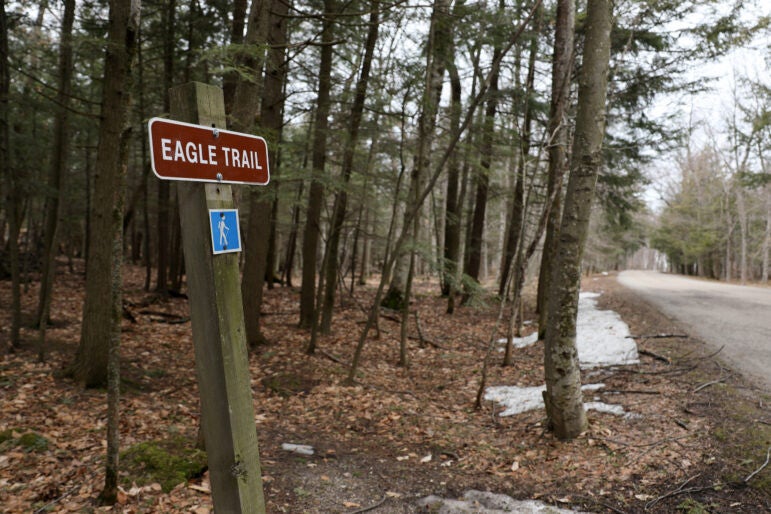 Peninsula State Park and other state parks remain open during the pandemic, providing a place for people to be outside in Door County during the crisis. Photo taken March 31, 2020. Coburn Dukehart/Wisconsin Watch

The number of people turning to the state's parks, hunting and fishing amid the COVID-19 pandemic grew significantly in 2020 according to new research from the non-partisan Wisconsin Policy Forum.

A new report titled "Take It Outside: Pandemic Spurs Outdoor Pursuits" shows that sales of state parks stickers jumped by more than 42 percent compared with sales in 2019. The report notes that is despite some state parks being closed in spring of 2020.

Wisconsin Policy Forum researcher Jason Stein told WPR it will take time to know if last year's boost was an aberration or a new trend. But he said it will likely have some impact moving forward.

"It's like anything, you know — if you can get a bunch of people to try something new, birdwatching or cross-country skiing or whatever it is," said Stein. "For some of them, it's really going to click with them."

Stein said there was an increase in deer hunting licenses as well, including those purchased by first-time hunters, but the increase was modest compared to fishing license data. Still, he said if that trend continues, it would represent a shift from a long-term decline in hunter participation.

"If this could sort of stabilize hunting and fishing license sales a little bit, or at least sort of slow down the decline in them," said Stein, "that would be really significant from a conservation funding standpoint."

Revenue from the sale of licenses and stamps accounts for the majority of funding for conservation and wildlife management in the state, according to the state Department of Natural Resources.

Trail passes for all-terrain vehicles also spiked in 2020. Between April and December 2020, the Policy Forum noted sales jumped by nearly 33 percent compared to comparable months in 2019.

In the 2015-2017 state budget, taxpayer funds going to state parks was cut by nearly $4.7 million — a reduction of almost 28 percent at the time. The Policy Forum analysis noted that increased fees at state parks helped restore much of the funding, though the state's park system estimated a $1.4 million shortfall.

The Policy Forum report collected national data on park spending by state. It found that the state spends around $1.20 per park visitor, which ranks Wisconsin second to last in the nation.

The report offers a list of options for state lawmakers to address park funding that include increasing certain user fees, expanding privately run lodging or sponsorships at state parks, or getting rid of park stickers with individual park passes.