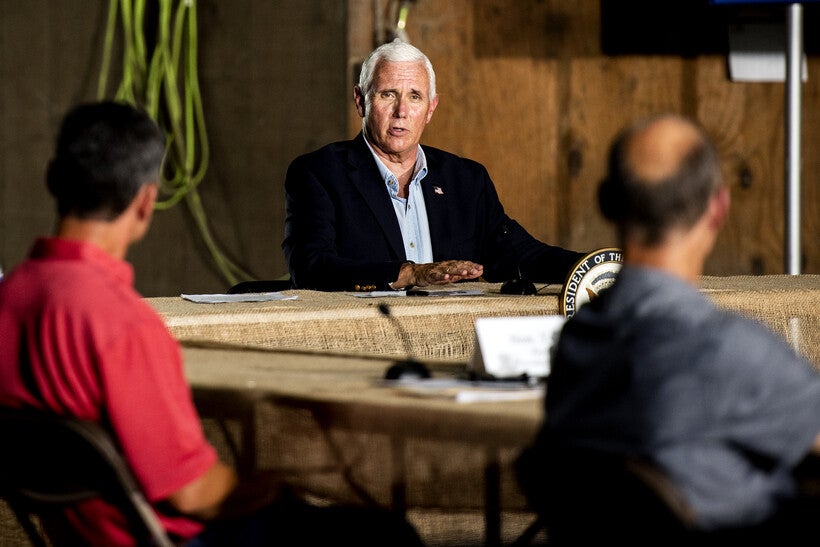 Vice President Mike Pence speaks at Morning Star Dairy on Friday, July 17, 2020, in Onalaska, Wis. Earlier in the day, he spoke to a small crowd in Ripon, Wis. Angela Major/WPR

Vice President's Speech At Ripon College Is His Second Wisconsin Visit In A Month
By Rob Mentzer
Share:

Vice President Mike Pence called his Democratic opponents socialists and warned that presumptive nominee Joe Biden was a "Trojan horse for a radical agenda" in a speech Friday at Wisconsin's Ripon College.

Pence touted the economy of the first three years of the Trump administration, and said Trump took "extraordinary action" to combat the COVID-19 pandemic this year. But the bulk of the address, which was billed as a "major speech" by Trump campaign officials, focused on defining Biden as an agent of the radical left.

Biden was perceived as a moderate candidate in the Democratic primary, defeating candidates like Sanders who called for more dramatic policy shifts on health care and economic inequality. The Biden campaign recently released a policy document under the name "Biden-Sanders Unity Task Force" that laid out new proposals intended to combat climate change and reform the nation's criminal justice system.

Of the document, Pence said, "the only thing it ended up unifying was Joe Biden to the radical left."

The Biden campaign blasted Pence's visit ahead of the speech. In a statement, deputy campaign manager Kate Bedingfield said that "the Trump campaign is once again sending Vice President Mike Pence to the Badger State to do damage control for this administration’s historic failure of leadership."

Recent polls show Biden with a clear lead in Wisconsin. Polling averages find Biden is leading Trump in the state by about 7 points.

In response to the national wave of protests that followed the killing of George Floyd by Minneapolis police, Pence called it a "false choice" to say that supporting police is in conflict with "standing with our African American neighbors." He repeatedly emphasized the Trump administration's support for police, and criticized Biden for saying that systemic racism was real and that police have implicit bias against Black people.

"We will stand with those on the thin blue line, and we will never defund the police," Pence said. "This president and this administration will back the blue."

Pence also repeated a false claim that Biden answered "Yes, absolutely" when asked whether he supported defunding police. "Defund police" has been a slogan of the protest movement, but Biden has said he favors "giv(ing) police departments the resources they need to implement meaningful reforms, and condition(ing) other federal dollars on completing those reforms." In the specific exchange cited by Pence, he did not endorse defunding police departments.

The Trump campaign has also issued television ads around the false claim.

The city of Ripon, about 22 miles west of Fond du Lac, is known as the birthplace of the Republican Party, which formed there in 1854 at a schoolhouse that is now a historic landmark. Pence spoke at Ripon College, at an indoor space with attendance limited to 50 people. Attendees wore masks. Pence wore a mask when he entered but took it off during his address, despite campus rules requiring everyone inside buildings at the private college to wear a mask.

Pence is scheduled to have a second campaign appearance in Wisconsin Friday afternoon, when he will tour a dairy farm and hold a roundtable discussion in Onalaska on the impact of Trump administration trade policy on local farmers.