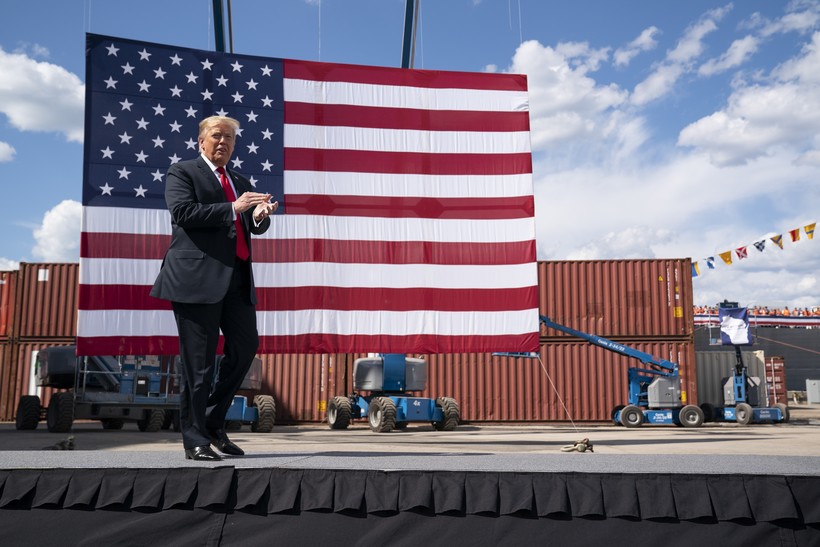 Vice President Was In The Battleground State Earlier In The Week
By Megan Hart
Updated:
Thursday, June 25, 2020, 5:00pm
Share:

President Donald Trump's return to battleground Wisconsin Thursday takes him to a shipyard in a deeply conservative, mostly rural area where U.S. Navy warships are being built.

Air Force One landed at Green Bay's Austin Straubel International Airport at about 1 p.m. There, Trump taped a town hall hosted by Sean Hannity to be broadcast on Fox News Channel Thursday night.

Tickets for the town hall were sold out and attendees were required to wear face coverings, according to the network.

Just after 10 a.m. Thursday, dozens of people were waiting to enter the Jet Air terminal where the event was held.

Marie Gabavics, 44, got tickets to attend the town hall with her father. Gabavics, who has lived in Green Bay for 12 years, said she expects Trump to answer questions about the recent nationwide protests and the 2020 election. She wore a "Women for Trump" shirt she was hoping to have signed. 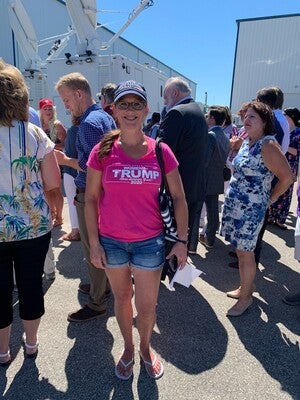 Marie Gabavics of Green Bay waits outside the Jet Air terminal at Austin Straubel International Airport where President Donald Trump was scheduled to hold a town hall meeting on June 25, 2020. She was excited to see him answer questions in such an intimate setting, she said. Megan Hart/WPR

"Trump is right for everybody. He values everybody's right as a human being," she said. "If you watch every other news channel, they're going to say he's racist, he's a womanizer, and I completely believe the exact opposite."

Gabavics said she believes Trump has done a "fantastic" job in his handling of the coronavirus pandemic, another topic she said would likely be covered in the town hall.

Not everyone waiting outside the airport was able to get tickets for the event. Nicholas Suess, 50, had the day off, so he decided to travel from Appleton to see if he could get in.

Suess doesn't side with a particular party, he said. He voted twice for former President Barack Obama, before casting his ballot for Trump in 2016. He still hasn't decided who he'll vote for in November, he said.

"I don't think it's smart to judge until the very end. You don't have to say your vows when you get married until you're at the altar," he said.

Recent news has focused too much on issues that divide people, Seuss said. During the town hall, he said he hopes Trump will focus on things that can bring people together.

Several people waiting outside the event said they were most interested to hear Trump's take on police reform and how he plans to maintain order amid ongoing nationwide demonstrations. A group of Black Lives Matter protesters also gathered outside the event Thursday.

Fred Sims, 25, drove about three hours from Marquette, Michigan, where he runs an organization called Social Justice For Us. He's been protesting for two weeks, but Thursday's event felt different, he said. It was empowering to protest in front of the president, he said.

"The majority of America is asking for a change, and I think (Trump) is mostly focused on getting voted in again," he said. 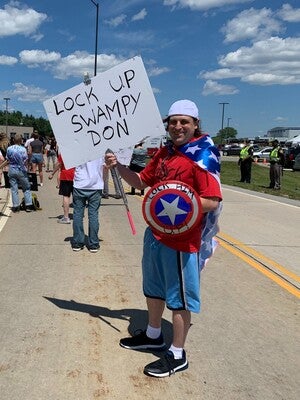 Shawn McKernan, of Plateville, dressed as Captain America for a Black Lives Protest outside of a town hall meeting featuring President Donald Trump. It was held in Green Bay on June 25, 2020. Megan Hart/WPR

At one point, the call-and-response was: "Say his name. Jonathon Tubby." Tubby, a 26-year-old member of the Oneida Nation, died in police custody in 2018.

Shawn McKernan, 35, has been participating in the Black Lives Matter protests in Platteville, where he lives. He also called out Trump's environmental and immigration policies.

"I just wanted to come out and voice the opposition to Trump and his agenda. Pretty much every aspect of policy he does is just the worst for everyone except him and his cronies," he said.

After the town hall, Trump traveled north for a visit to Fincantieri Marinette Marine. The shipyard was recently awarded a $5 billion contract to build new guided-missile frigates for the U.S. Navy. It could bring up to 1,000 jobs to the area, according to a news release from State Rep. John Nygren, R-Marinette.

Crowds cheered as Trump's motorcade arrived at the facility, and hundreds of Marinette Marine employees attended his remarks. Trump joked about how the new Navy contract will keep them busy for years.

"Every single day, you prove American workers are the best in the world, and now you're going to do things like you've never done before," he said.

Trump talked about his plans to increase the size of the U.S. Navy to 350 ships. He also took a moment to directly address the "fake news" media on the topic of coronavirus testing. The U.S. has the greatest COVID-19 testing program in the world, he said. This comes a day after administration officials discussed discontinuing federal funding for more than a dozen coronavirus testing sites across the country.

The two parts of Wisconsin targeted by the Republican president are areas where he needs to run up a big vote advantage in November. A new poll from the Marquette University Law School released Wednesday showed Democrat Joe Biden leads Trump by 8 points.

Trump's visit to Wisconsin comes just two days after Pence was in the state for events focused on school choice and religious faith.

A campaign spokesperson for Biden says Wisconsin families deserve strong leadership to help the country recover but Trump "is unprepared to meet the moment." In a statement shared with the Green Bay Press Gazette, Biden's campaign said Trump is taking credit for investments in Marinette Marine initially made under the Obama-Biden administration.