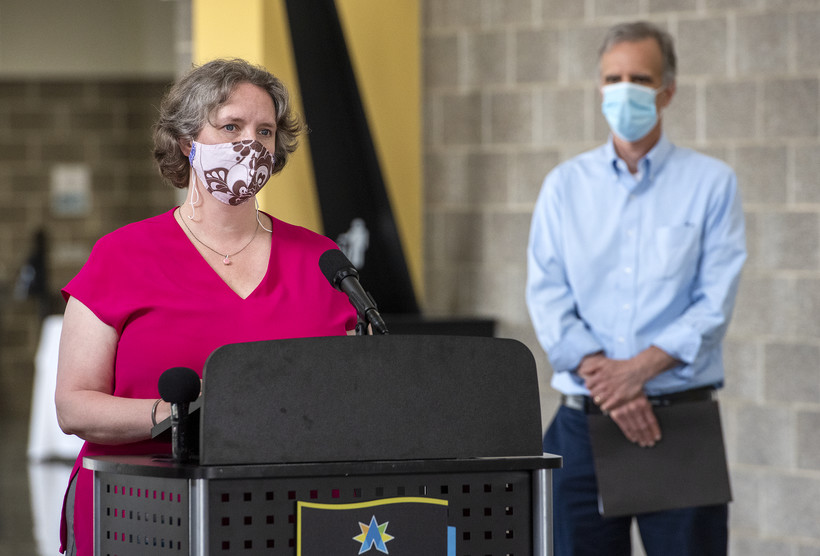 'Let's Not Get There': Local Leaders Reluctant To Renew Mask Mandates

New CDC Guidance Suggests Masks Are Needed, But Local Governments Aren't Yet Moving To Mandate Them
By Rob Mentzer
Share:

Local government leaders may face difficult decisions in the wake of new public health guidance that even some fully vaccinated people should mask up.

The Centers for Disease Control and Prevention issued the new recommendations Tuesday. In Wisconsin's two largest cities, leaders immediately said restoring mask mandates would be under consideration as they seek to fend off a new surge in COVID-19 infections.

In Milwaukee, Mayor Tom Barrett said on Tuesday that the city would ask people to once again wear masks in indoor spaces outside their homes, but wouldn't yet mandate or enforce the rule.

"This is a tough request to make, because we felt like we were getting life back to normal," Barrett said. "We really don't want to use the enforcement, because we're not sure it's going to be effective right now. But we certainly have the hope that Milwaukeeans will embrace masks once more as an effective tool."

But Barrett acknowledged that a new mandate might become necessary as the more contagious delta variant of the coronavirus continues to spread throughout Wisconsin. The state has seen a marked increase in new infections and hospitalizations in recent weeks. As of Wednesday, the Wisconsin Department of Health Services reported a seven-day average of 478 new infections per day.

The overwhelming majority of all new COVID-19 infections are among the roughly 50 percent of Wisconsinites who haven't yet been vaccinated against the pandemic disease. Though rare and usually not as serious, breakthrough infections are possible among vaccinated people.

Milwaukee City Council member Marina Dimitrijevic said that while Milwaukee as a whole is about 50 percent vaccinated, there are some neighborhoods where vaccine uptake is much lower, closer to 20 percent.

"That is a perfect opportunity for the Delta variant to just ravage our community," Dimitrijevic said.

The CDC's new guidance is based on findings that the delta variant is more transmissible by vaccinated people than earlier forms of the virus. In a letter to Barrett and Health Commissioner Kirsten Johnson, Dimitrijevic and five other council members called on the administration to restore the city's mask mandate if Milwaukee's COVID-19 incidence reaches 100 cases per 100,000 people. It's over 50 per 100,000 now.

Dimitrijevic said that a new mask mandate is just one tool for the city to help arrest the disease’s spread. She wants to see Milwaukee require city employees to get vaccinated, and offer cash incentives to city residents to promote vaccinations.

"All of our energy has to go into vaccinations," she said. "But it takes time to inoculate folks. We do need to have the mask as a method ... to slow the transmission (of COVID-19)."

In Madison, Mayor Satya Rhodes-Conway also said the city would ask residents to wear masks rather than requiring them.

"If we're all diligent about following these recommendations, we can hopefully avoid the need for further action."

"We would love to not have to do (a mask mandate)," Heinrich said. "We've done it in the past. We are committed to using all the tools in our toolbox. But let's not get there. Let's do what we need to do to prevent any further increase in transmission in our community right now."

In late 2020, the Marquette Law School Poll found mask mandates to be very popular with Wisconsinites, and to have majority support in all regions of the state. But that came as the state was in the midst of a spike in new infections that would become among the worst in the nation. Today, there is less coronavirus in circulation, and the widespread practice of masking has fallen away after the CDC's May guidance that fully vaccinated people didn't need to wear them in most circumstances.

In March, when the state Supreme Court struck down the statewide mask mandate, many local governments enacted their own. (Some had even put local ordinances in place before the court's order.) By May, new COVID-19 infections were waning and vaccinations were rising when the CDC issued new guidance. After that, local governments in Wisconsin ended their mask mandates or allowed them to expire. As of Tuesday evening, none had announced plans to reinstate a mandate.