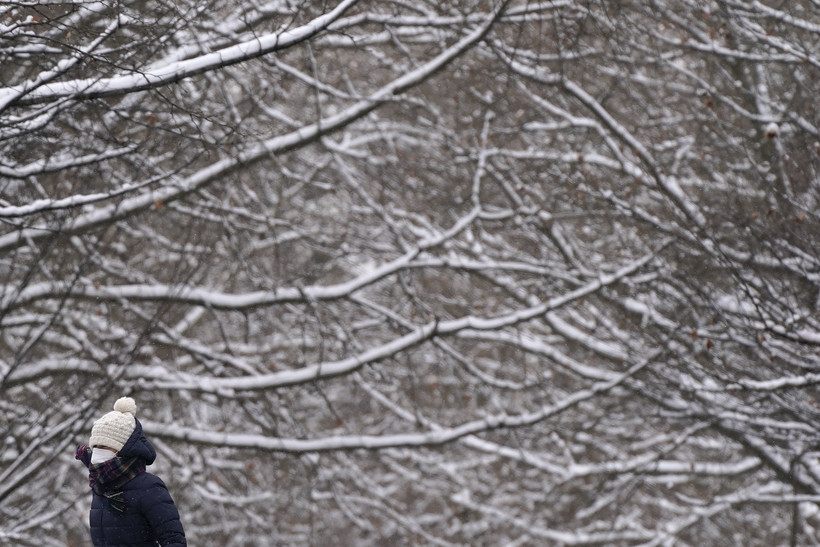 A person walks past snow-covered tree branches as they wear a face mask to protect against the spread of COVID-19, Tuesday, Feb. 2, 2021, in the Georgetown neighborhood of Washington. Patrick Semansky/AP Photos

On Tuesday, the Eau Claire City Council and Eau Claire County Board of Supervisors approved identical ordinances requiring face masks in businesses and public indoor settings if the statewide mandate is repealed. Those violating the order could face $200 fines.

During extended online public comment sessions in both chambers, some speakers railed against the mask requirements claiming the ordinances were unconstitutional, ineffective and potentially criminal. Others, speaking in support of the mandate, urged members to have something in place to protect vulnerable community members in the event the statewide order is undone.

Prior to Tuesday night's vote, County Board Chair Nick Smiar said city and county officials began crafting the local mask orders soon after the Wisconsin Supreme Court overturned an extension of the "Safer at Home" executive order from the Evers administration in May.

"It was not clear that the governor's order might be vacated until last week when the Senate actually did it," said Smiar. "By that time we had formulated a 'just in case ordinance.'"

Despite the expectation that the Republican-controlled Assembly would quickly follow suit, Assembly Speaker Robin Vos, R-Rochester, announced Thursday the body would delay overturning the state's mask mandate to avoid the loss of tens of millions of dollars of federal food aid. Still, Vos said the Assembly could vote as soon as this week to follow through on the mask mandate repeal.

Smiar said the Eau Claire city and county mask mandates are essential tools for dealing with the COVID-19 pandemic and a proven way to limit the spread of the virus. The ordinances also require businesses to post signs alerting customers to the mask order.

Eau Claire County, like others across the state, are in the middle of a "policy pingpong game" played by state lawmakers, said Smiar.

"Sometimes, the state Legislature will say, 'Oh, we're going to take away your local control over this. We're going to make this statewide because we can't have all this patchwork of local stuff,'" said Smiar. "And then they turn around the next time and they say, 'Oh, you know, this stuff, you have to do this locally.'"

Eau Claire City Council member Kate Beaton said having to craft a local face mask ordinance because state lawmakers oppose Evers' emergency declarations leaves her feeling like local officials have to do the jobs of state and national policymakers.

"What we really want, at the bottom line, is for folks to be staying safe, to be keeping their community safe by wearing a mask," said Beaton. "And whether it comes from the state or the local ordinance, that's sort of the end goal."

Beaton said the City Council's vote on the mask ordinance was preceded by thousands of emails on the subject. She said she has never seen more interest generated by a local issue.

Lieska Geise, director of the Eau Claire City-County Health Department, was involved with the development of the local mask ordinances. She said public health orders like the mask mandate are most effective when enacted at the federal or state levels.

"So, absent a federal or state mandate, certainly we have responsibility locally to look at that kind of standard being in place locally," Geise said.

Other cities are re-crafting ordinances to ensure mask mandates remain in effect regardless of whether the Evers order is repealed.

On Tuesday, the Green Bay Common Council was set to extend a local mask mandate to run through March 31.

The Superior City Council also passed a local mask ordinance Tuesday that would extend a local COVID-19 state of emergency through Feb. 28. Businesses that refuse to follow the ordinance could lose city-issued licenses and grants.

Local face mask mandates in Milwaukee and Dane counties have run in concurrence with the statewide mask order and would remain in effect.