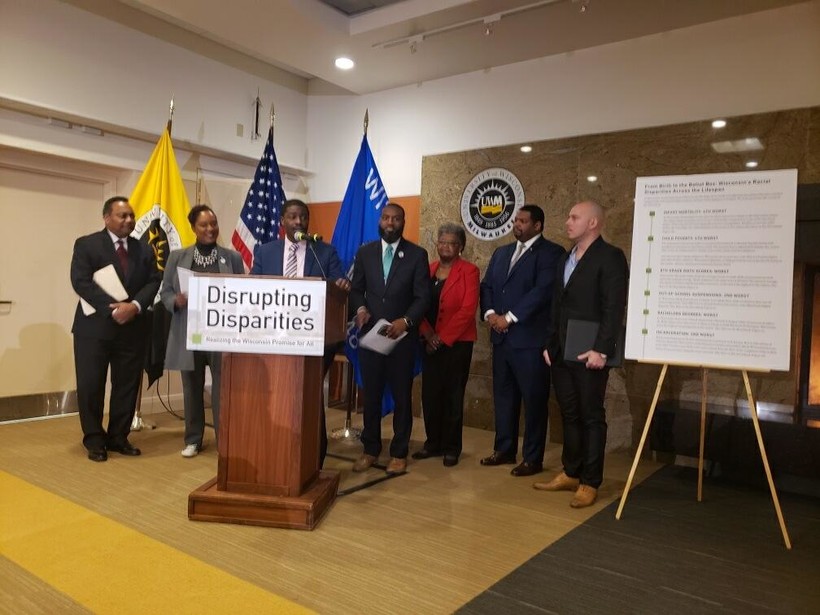 A group of African American legislators from Milwaukee is proposing a package of legislation they say will help make Wisconsin a more equitable state.

The group of Democrats are calling the bills "Disrupting Disparities." They unveiled the proposals at a press conference and roundtable discussion this month in Milwaukee.

Rep. David Crowley said the bills, which include several criminal justice reform measures, are a first step in addressing racial inequality in Wisconsin.

"We need to start a discussion about how we reform these systems," said Crowley, who has also declared his candidacy for Milwaukee County Executive.

Racial disparities in Wisconsin are large and persistent. A national school report card released in October showed the state has the worst racial achievement gap in the nation. The state's infant mortality rate for African Americans is the highest in the nation. Milwaukee is one of the nation's most segregated cities, scoring low in quality of life measures for black residents. And researchers who have looked at data on issues such as unemployment, income and education levels have found that the state is less equal and African Americans have a harder time than in most other states.

One bill in the package would limit the number of days a prisoner can spend in solitary confinement if he or she has been diagnosed with a mental illness. Crowley said excessive use of solitary confinement can exacerbate mental health issues. Another bill would put limits on the use of restraints among juvenile prisoners. Another would make $5 million in grant funding available to promote community policing in cities with high minority populations.

"There are so many creative ways to use these dollars to rebuild trust between police departments and our communities," Crowley said.

Other measures in the package of legislation would require the state's Joint Review Committee on Criminal Penalties to meet and would require the creation of economic impact statements when legislators pass a bill that adds a new criminal penalty.

Crowley, who worked with Reps. David Bowen and LaKeshia Myers and Sen. Lena Taylor on the measures, said he and his colleagues don’t expect all of these bills to make it to the floor of the Republican-controlled Legislature. He also acknowledged that some of the proposals are limited in scope in hopes of attracting bipartisan support.

"We always have to remember where we are in the Legislature as Democrats," he said. "We are deep in the minority."

But he hopes the push will attract bipartisan support and can start to move the issues forward.

"If we're going to be effective legislators, we can't just say because there's this (political) makeup, we're not going to push policies forward that are good for these communities."