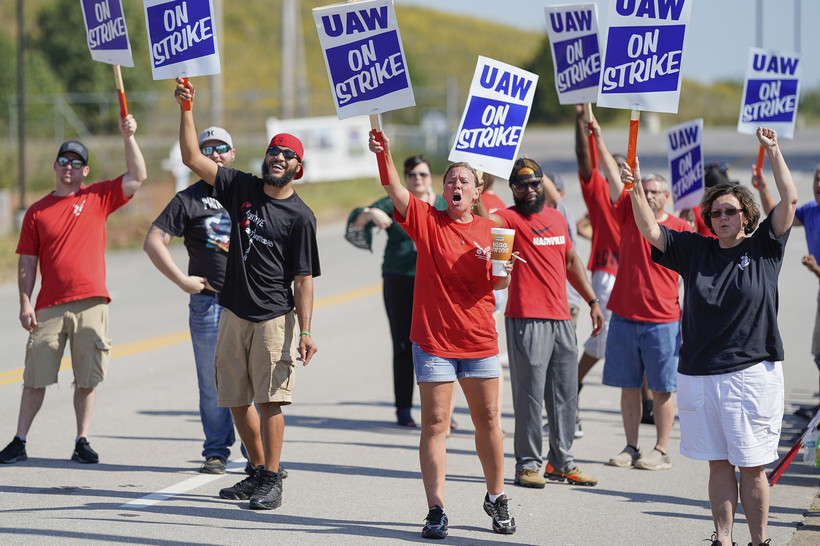 Worker reluctance to return to jobs forces Wisconsin employers to adapt to a new labor market
By Diane Bezucha
Share:

Whether working from home or on the frontlines, the COVID-19 pandemic forced many people to reexamine their relationships to their jobs. For some workers, this meant taking stock of their values and their worth — and holding out for a job that matched.

According to a panel of labor experts, that's forcing employers to adapt to a new job market.

People have left their jobs in droves during the pandemic — a trend that has not stopped. In Wisconsin, new unemployment filings reached an eight-month high on Dec. 4, growing 37 percent since the previous week.

For some this is a choice — baby boomers retiring, professionals looking for remote work options, or families realizing they can get by on one income after staying home with kids through the pandemic.

But for others — typically those on the lower end of the wage spectrum — leaving jobs was a necessity. When bars and restaurants shut down, many employees shifted over to industries like retail, health care or manufacturing to pay the bills. Others left the workforce altogether.

Federal support in the form of enhanced unemployment benefits, stimulus checks and child tax credits put workers in a financial position to pause and consider their options.

People are quitting their jobs at nearly twice the rate they did before the pandemic. And they’re not in a rush to come back, Michael Childers, University of Wisconsin-Madison School of Business professor, said.

"Workers are more selective and have that opportunity right now based on the job market. And that almost becomes self-fulfilling. It's sort of this sustaining cycle that we're in," Childers said at Tuesday’s event.

Rise in unionization, employee action across the US

With labor shortages plaguing nearly every industry, employees are the hot commodity. Those who are reentering the workforce are trying to do so on their own terms. From Starbucks and John Deere to Kellogg’s and Wisconsin’s own Colectivo Coffee, this fall saw a surge in collective employee action.

Advocates say the pandemic turned a spotlight on workplace inequity. Online retailers like Amazon and Walmart turned huge profits during the pandemic while workers toiled on the frontlines.

"It was working people that powered us through this pandemic," said Bloomingdale. "The CEOs of these corporations were not getting up and going to the office or to the plant. They were Zooming it in. But working people, by and large, were not able to do that."

So workers are pushing back.

Bloomingdale likened the recent boom in labor activism to the post-World War II era when union membership was at an all-time high and a strong middle class emerged.

"We can get back there," said Bloomingdale. "But that's going to require many different things, which includes workers standing up for ourselves in the workplace. And that's what we've seen over October — 100,000 people on strike throughout this country. That means workers are saying, 'Enough is enough. We're tired of lousy jobs with bad working conditions. And we want more.'"

Childers said current levels of employee activism may not compare to historical numbers, but he said it has certainly spiked since the pandemic began. And most of it is not even coordinated efforts like the strikes making headlines.

"Those are sort of cues to other workers that if it's bad, maybe we have agency to make things better. And I think that's part of what we're seeing right now," Childers said.

One of the strongest forms of protest has simply been not going back to jobs that were a struggle even before the pandemic.

This dynamic is playing out acutely in bars and restaurants.

"A lot of people had a real hard time making ends meet in the restaurant industry," Bloomingdale said. "The hours were unpredictable. The tips were sometimes high, sometimes low."

The state lost 22 percent of its restaurant and hospitality workforce during the pandemic, Kristine Hillmer, Wisconsin Restaurant Association president, said. In Dane County alone, it was 44 percent. And Hillmer said the losses are likely permanent, as workers have moved on to other industries.

As a result, the industry is struggling more than others to fully recover. Hillmer said restaurants are reducing hours and seating capacity just to avoid burning out the limited staff they have.

Hillmer said 75 percent of the association’s members are small, independently-owned businesses, where owners often work alongside their staff.

"I know of no restaurateur who doesn't think of their staff as family. However, that business still needs to survive," Hillmer said Tuesday. "If those businesses don't survive, then those jobs are gone."

'People want to be treated as family, but they also want to be able to get paid'

But Bloomingdale said people need a lot more than camaraderie in a job.

"In order to get more people to work in these industries, we need to pay better, have better hours and better working conditions. And so yeah, people want to be treated as family, but they also want to be able to get paid," Bloomingdale said.

Hillmer said most restaurants have raised wages and benefits. She claims you can’t find a dishwasher in Milwaukee now for less than $17 an hour. But after such a devastating year, the service industry is crawling out of a much deeper hole than others, and operating at limited capacity is making it hard to catch up.

Hillmer said 15 percent of the state’s restaurants closed permanently during the pandemic. She expects the number to grow.

"Right now, restaurants and hospitality, they are in the fight of their lives," Hillmer said. "Yes, we want to raise wages, we want to offer paid time off, we need to do that. But if that also means that your hamburger is now $25 ... and nobody can afford it, and the business goes out, then everybody loses."

With inflation the highest it’s been in decades and enhanced unemployment phased out, many people expect workers to start returning at a faster rate. But full economic recovery for Wisconsin’s restaurant industry isn’t expected until well into 2023 — a timeline that could be stretched even further if new COVID-19 variants keep surfacing.

And if the industry isn't able to remold itself into one people actually want to work in, labor shortages could be an ongoing issue.

"If you can’t find workers, you find ways to get the job done," said Childers.