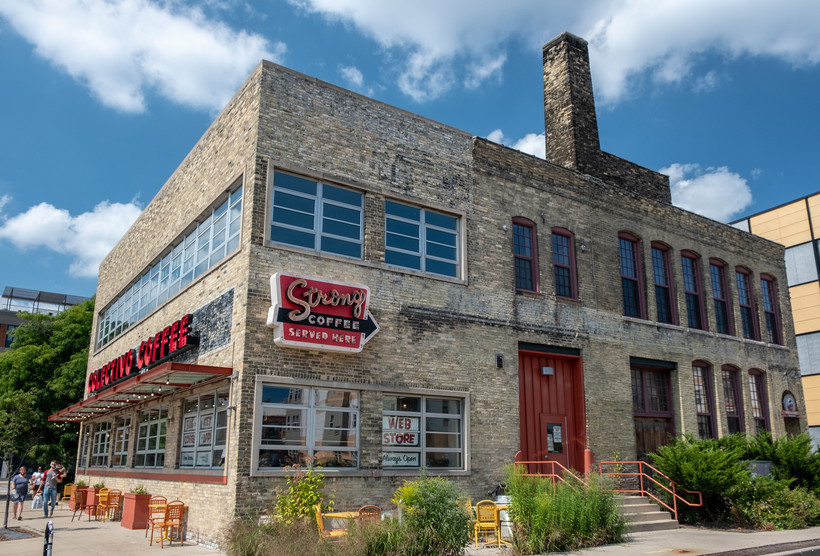 Organizer: The Biggest Hurdle Is Thinking It Can't Be Done
By Corrinne Hess
Share:

The decision this week to allow more than 300 baristas, bakers and other staff at Colectivo Coffee to unionize could influence restaurant workers across the state.

Employees at the Milwaukee-based coffee shop chain are set to become the largest unionized cafe workforce in the country following a year-long battle between management and organizers.

The National Labor Relations Board announced Monday that pro-union employees could join the International Brotherhood of Electrical Workers with a vote of 106 to 99.

Colectivo operates a roasting facility in Milwaukee’s Riverwest neighborhood and cafes in the Milwaukee, Madison and Chicago areas.

One of the Colectivo employees who started organization efforts in July 2020 said during an interview with WPR on Tuesday that the biggest obstacle in the fight was figuring which union to partner with.

The organizer, who did not want to be named out of fear of retaliation from Colectivo management, thinks the victory will inspire other restaurant employees.

"The biggest hurdle is thinking it can’t be done," the organizer said. "I think once you see it can be done, especially at the scale we just did it, it’s an easy conversation started at the work site. Saying 'Oh my God, did you see Colectivo just organized,' and then relating what we’re doing to their specific situation.'"

Stephanie Bloomingdale, president of the Wisconsin AFL-CIO, called the victory for Colectivo and IBEW a "significant game-changer."

"It is a bold example and a bright inspiration for other cafe workers, restaurant workers and workers in general," Bloomingdale said. "What this says is we can do it. If people stick together it’s the best way to build power in the workplace."

Representatives from the Wisconsin Restaurant Association did not respond to repeated requests for comment.

But Omar Sheikh, owner of Carnevor steakhouse in Milwaukee, said the industry has suffered tremendously over the last 18 months and there are still many factors making it difficult for restaurants to get ahead, including finding labor and the ongoing COVID-19 pandemic.

Sheikh, who is also opening a food hall in downtown Milwaukee, said if a union would help attract long-term employees, it could be an attractive prospect to him, but he is also afraid of the unknown consequences a union could bring.

Joe Muench is the co-owner and a chef at Black Shoe Hospitality, which has four restaurants in the Milwaukee area and employs about 150 people. He said he understands why some larger organizations do decide to unionize. But said if his employees formed a union, it would be bad for business.

"There has been attempts for unions to come into (Milwaukee), certainly in the hospitality industry you hear about it," Muench said. "With the dynamic state of restaurants right now, and how we have to adapt to new (public health) mandates almost daily ... for us as a business, we want the best employees possible."

Muench said if all restaurant employees formed unions, the costs would be reflected in price increases to customers.

"If you put in a universal hospitality union, everyone from McDonalds to KwikTrip all the way to a Hilton Hotel or high-end restaurant would have the benefits, a union isn’t paying for those," Muench said. "It would have to come from the public."

Colectivo owners did not respond to requests for comment. In an "Open Letter to Customers" posted on the company’s website Monday, the owners said less than one-third of eligible workers supported the union and the National Labor Relations Board counted votes of people who had already resigned.

"It is our best estimate that fewer than 100 of our current 440 co-workers voted for this union," the letter said. "We will, of course, respect the rules and bargain in good faith."

The union organizer said that in November 2019, employees working in Colectivo’s Milwaukee warehouse were not getting performance reviews, effectively keeping them from getting raises. Workers started to talk about unionizing.

"Then the pandemic hit," the organizer said. "During that time, most of our warehouse didn’t have any (personal protective equipment) or policy with COVID, and it became very apparent we needed a union."

The organizer said despite the long fight, they hope to continue working at Colectivo and that the relationship between management and employees will mend.

"This is a really good time for both the organizers and the company to set aside whatever differences we have and understand we have to come together to write this contract," the organizer said. "Colectivo, being a progressive company, if they are actually willing to unite, really good things can happen."