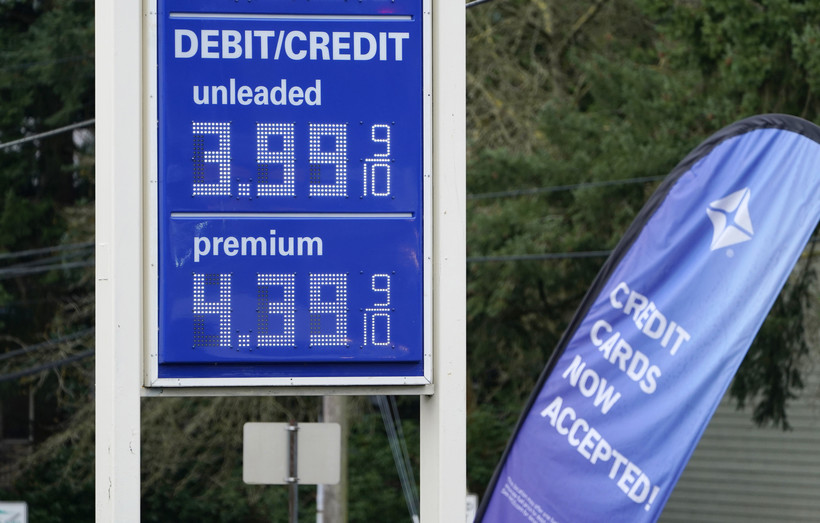 Economists worry that if COVID isn’t reined in soon, we could see long-term impact on economy
By Diane Bezucha
Share:

For the past year and a half, Gregory Clement has watched the price of metals skyrocket. He is the owner and president of Argon Industries, a contract metal fabricator in Milwaukee.

From the time he gets an estimate for materials to the time he makes the purchase, the price has already increased. To stay in business, Clement has had to pass these added costs along to his customers by continually raising prices.

"It's a constant management issue, so I have multiple people that are constantly watching the material, ordering the material and then repricing material," said Clement.

In July, when federal data was last available, the price of metal was up about 140 percent from pre-pandemic levels. Steel saw a jump of more than 200 percent.

And these price spikes aren’t limited to manufacturing.

According to data released Friday, consumer prices rose 6.8 percent in the past year — the steepest rate of inflation in nearly four decades. Energy and food prices were key drivers but even after eliminating these highly variable categories, prices still rose 4.9 percent.

While rates saw a slight dip from October to November, economists are not confident there will be a significant improvement anytime soon.

"We're learning that it's pretty easy to turn the economy off. But it's really hard just to flip the switch and turn it back on," said Steve Deller, a professor in agriculture and applied economics at the University of Wisconsin-Madison.

What has economists worried is how long prices have been elevated and how inflation has become more "broad-based," meaning it's spreading to nearly every part of the economy.

Even Federal Reserve Chair Jerome Powell admitted this month that COVID-19’s economic impact can no longer be thought of as "short-term." To push things in the right direction, the Fed may need to start raising interest rates sooner than expected.

"Now their horizon has changed," said Kundan Kishor, a professor of economics at UW-Milwaukee. "They will have to become more aggressive than they initially planned to."

While higher interest rates may help reduce some consumer demand, economists say it won’t fix the traffic jam in the global supply chain.

The pandemic shifted buying habits from services to goods. People stopped going out and with the money they saved, and started sprucing up their homes with new couches and kitchen gadgets.

Part of the problem, Deller said, is a reliance on last-minute inventories. Rather than investing in the cost of warehousing excess inventory, companies pass that cost on to their suppliers and only keep on hand what they need. When everything is working, Deller said this is an extremely efficient system that keeps costs down for businesses and consumers.

"The problem is that when you start to get these bubbles and bottlenecks, the whole system collapses. And that's what we're seeing now," said Deller. "It's like this perfect storm of all these different things that are coming together, and it's driving costs up."

This has also meant significant delays for customers and businesses alike.

Clement said last year he was scrambling to replace a $750,000 order when a supplier canceled. And he is still waiting on an international order that was due in March. Clement said he doesn’t expect to see it before February — nearly a year late.

And these shortages can be seen across the market — whether you’re buying a new sofa or a used car.

"Just drive by an auto dealership anywhere in Wisconsin right now and it looks like they're out of business because they can't get computer chips in their automobiles," said Kurt Bauer, CEO of Wisconsin Manufacturers and Commerce.

Bauer said businesses of all sizes are struggling to get the components or products they need. Some companies have even resorted to purchasing supplies on eBay.

"The supply chain is so disrupted and the costs are just going up. So this will have an impact," Bauer said. "Consumers will see higher prices now and for the foreseeable future."

'It all hinges on COVID'

Another factor driving up prices is labor shortages. In-part, this was a trend well underway before the coronavirus pandemic, as aging baby boomers started to retire. But many argue federal stimulus payments, child tax credits and enhanced unemployment benefits have made it easy not to work.

Clement said his entry-level positions have been hard to fill. Despite raising wages and creating flexible, child care-friendly shifts, he still has about 30 open positions.

With federal stimulus checks and enhanced unemployment phased out, economists predict a return to the workforce, with employment levels nearing pre-pandemic levels by mid-2022.

Still, nothing is certain and economists say the pandemic has upended the economy in historic ways.

"What COVID has done is, among other things, it's changed the risk-benefit calculation that workers do," said Menzie Chinn, a professor of public affairs and economics at UW-Madison.

Chinn said workers have spent the past nearly two years reconsidering their worth and the conditions in which they’re willing to work. As they factor this into their job hunt, it drives up wages and, in turn, inflation.

And while higher wages are not bad, inflation thinking can be. And this is the long-term trend that has economists concerned.

"If you have enough periods of high inflation, does that get built into people's expectations about what inflation will be in the future? And once they build that into the decisions, then it gets embedded into the economy," said Chinn.

But the answer, economists say, is not in wages or interest rates. It’s in vaccines.

The inflated economy has persisted as long as it has because the COVID-19 virus keeps mutating and forcing new shutdowns. An unpredictable virus has created an unpredictable economy. Getting the virus under control is what will ultimately strengthen supply chains and allow the market to right itself. And this is true not just for the United States, but for all the countries from which we buy stuff.

"It all hinges on COVID," said Deller.