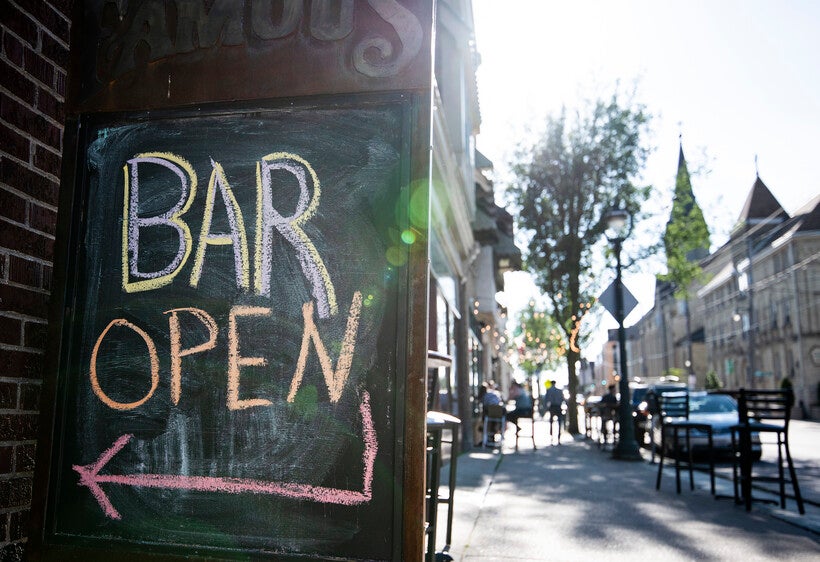 A sign on East Brady Street in Milwaukee indicates that a bar is open to customers on Monday, July 13, 2020. Angela Major/WPR

Wisconsin Bars And Restaurants Are Bouncing Back, But Not To Pre-Pandemic Levels

A report published last week by the Wisconsin Policy Forum shows the state’s bars and restaurants are recovering, but have not reached pre-pandemic levels.

This is not because of a lack of customers or jobs, the report shows. It’s because restaurant and bar owners can’t find enough willing workers.

"We have seen customers coming back, and we’ve seen a lot of our long-time regulars coming back. The biggest problem that we’re having is staffing and having enough staff to handle the demand," said Chris Wiken, owner of The Packing House in Milwaukee.

On a busy night, Wiken has to let tables sit empty, simply because he doesn’t have the staff to serve them.

Food service has been one of the hardest-hit industries during COVD-19, with employment at bars and restaurants plummeting by nearly 50 percent in April 2020. According to last week’s report, employment was still down 8.8 percent in August compared to pre-pandemic levels in August 2019.

"Overall, what we’re seeing is the restaurant and bar industry in Wisconsin has recovered quite a bit, but that it's recovery is not quite as strong as the economy overall," said Joe Peterangelo, a senior researcher at the Wisconsin Policy Forum and author of the report.

But while employment may be lagging, business is booming.

'Bursting At The Seams'

"We’re bursting at the seams," said Omar Shaikh, partner at Carnevor in Milwaukee. "We’re the busiest we’ve ever been."

Like most restaurants, Carnevor had to close during the pandemic, and when it did reopen last summer, it was with limited capacity for five days a week instead of the usual seven. But Shaikh said business has grown steadily since then as restrictions have lifted and more people have gotten vaccinated. The Milwaukee Bucks winning the NBA championship didn’t hurt, either.

"We’re probably doing as much in five days a week, revenue-wise, as we were doing in seven days a week pre-pandemic," said Shaikh.

July sales tax revenues in the industry were actually up 6.8 percent compared to July 2019, according the report.

This boom in sales should help restaurants and bars recover from a difficult year and a half, but it’s not. Owners must contend with supply chain shortages, and any increase in sales revenue has to cover much higher food costs and increased wages.

According to the report, wages have grown faster in this sector than in any other. The average hourly wage for restaurant and bar employees nationally rose by 11.4 percent to $17.27 between July 2020 and July 2021.

Both Wiken and Shaikh have increased pay across the board.

"We have a lot of good employees, and we want to take care of them," said Shaikh.

He added that remaining competitive right now is key.

But even higher wages have not proven to be enough to lure staff back to jobs in an industry where many people say they have been overworked and underpaid.

According to the report, 39.1 percent of workers in Wisconsin’s accommodations and food services industry filed initial unemployment claims between March 15 and July 5, 2020, which was the highest among all sectors. With those benefits ending nearly a month ago, bar and restaurant owners expected to see a surge in applicants, but that just hasn’t happened.

"We’ve been advertising. We’re doing everything we can to try to get the word out that we’re looking for people. We’re just not getting applicants. Period," said Wiken.

Lack Of Employees Leads To Reduced Hours Of Operation

Before the pandemic, The Packing House had about 60 employees. Now it's forced to get by on half that. The staff Wiken does have are already working extra hours, often putting a strain on themselves and their families, said Wiken.

So, he’s cut back the number of days he's open to five. Wiken's parents opened the restaurant in 1974, and it used to be open 365 days a year.

"If we could open seven days a week, we would be," said Wiken. "We just don’t have the staff to do it."

The experience has been the same for Shaikh, even with so much business at Carnevor.

"People will call for interviews, show up for an interview and then not show up for work," said Shaikh. "It was really frustrating."

Before the pandemic, Shaikh had about 56 employees. Now he has 46.

This is happening a lot of places, said Kristine Hillmer, president and CEO of the Wisconsin Restaurant Association.

And this is a trend happening across the country, not just Wisconsin.

Still, Wisconsin is lagging behind the national average. According to the report, employment in the food service industry was down 6.1 percent nationally, compared to the 8.8 percent in Wisconsin. While some of this can be attributed to Wisconsin’s lagging population growth, for Hillmer, this points to something much bigger.

"Right now we are at a crossroads with the industry," said Hillmer. "Will there be an industry and will there be great restaurants and great bars as we come out of this pandemic? Absolutely. But it might just look different."

For some, these labor shortages are forcing a reckoning in the food service industry, where long hours, low pay and grueling conditions are often the norm. Changes like reduced hours, fewer meal services and higher prices could become long-term trends for customers if things don’t change.

But Shaikh is not ready to throw in the towel yet — he's far from it.

"I’m remaining optimistic. I just hope more people get vaccinated," said Shaikh. "You can only hope for the best."