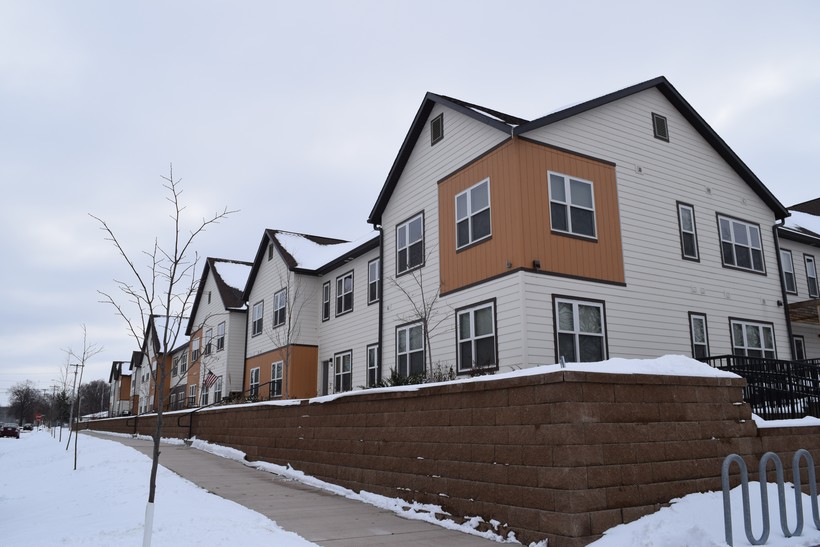 The Garden Terrace apartments, seen here on Monday, Jan. 2, 2020, were completed in 2019 to provide new affordable housing and several apartments for veterans who have experienced homelessness. Hope Kirwan/WPR

The city of La Crosse has received a national award for an affordable housing project that helps address homelessness among veterans in the community.

The annual award recognizes communities for their service to low-income residents through exemplary use of HUD’s Community Development Block Grant funds.

La Crosse received the award for the Garden Terrace apartments, an affordable housing project on the city’s north side that was completed in 2019.

The project was built with $775,000 in HUD Community Development Block Grant funds from the city, as well as tax increment financing and a $40,000 grant from the city's Floodplain Relief Program.

Developed by nonprofit affordable housing company Impact Seven, 15 apartments in the 50-unit complex are dedicated to supportive housing for veterans who have experienced homelessness.

Caroline Gregerson, community development administrator for the city of La Crosse, said the city looked at similar projects around the county that give people access to housing regardless of their background and provide long-term rental subsidies.

She said the city also wanted to make sure veterans had a place to use the vouchers for rental housing they can receive through federal veterans programs.

"We piloted the thought of mixed-income housing. So this proved to us that we could do it, and we learned a lot along the way," Gregerson said.

The 35 other units in the apartment complex, which have one to three bedrooms, are for a range of income levels.

Kahya Fox, executive director of Habitat for Humanity La Crosse Area, said the city is home to a large community of veterans because of its proximity to the Tomah VA Medical Center and Fort McCoy.

"Veteran housing is something that we’ve identified at Habitat and in the community as a huge need. And then there's also needs for individuals who are members of protected classes and people who are racial minorities who have been inordinately disadvantaged when it comes to safe and affordable housing," Fox said. "Taking the lead like the city of La Crosse did with their housing development on addressing those needs and finding unique ways is a really wonderful thing and I’m so happy that the city received recognition for that."

Fox said she hopes the award will raise local awareness about the need for more affordable housing options and serve as a model for helping other underserved groups.

Gregerson said the most difficult part of the project was building the complex out of the 100-year floodplain that covers much of the city’s north side. She said developers built retaining walls and brought in fill to raise up the complex.

"(The location in the floodplain) was the reason why the city owned this vacant parcel of land that was fairly large, and for years and years didn't know what to do with it," Gregerson said.

La Crosse has struggled for years with a lack of development on the north side because of the floodplain designation, which requires property owners to have flood insurance and carries extra building restrictions.

Gregerson said the Garden Terrace project has a stormwater management plan and intentionally undeveloped land around it, including space for community gardens run by the Hunger Task Force of La Crosse.

"I think that it's important to look at both how do we intentionally not develop areas that are in the floodplain and then areas where we say yeah, let’s take on this challenge and bring in the fill to still see development happen," Gregerson said.