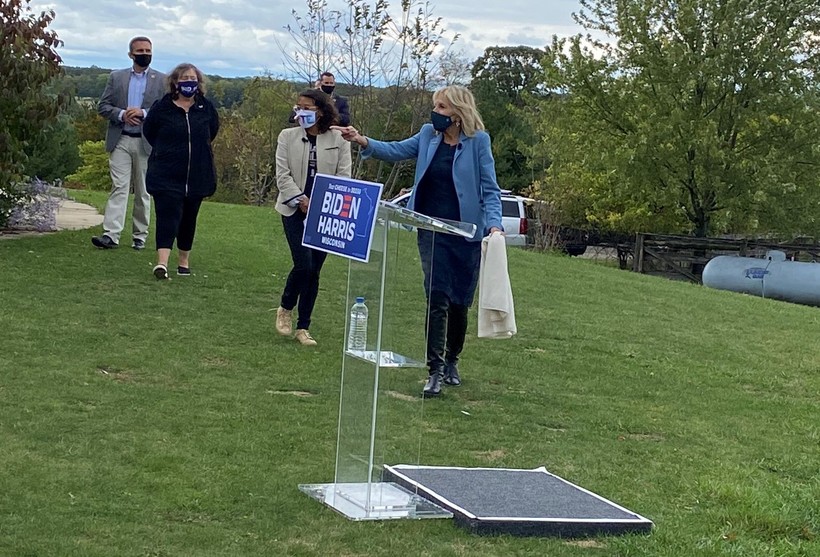 Former Second Lady Jill Biden made a stop in Eagle, Wisconsin, on Monday, Sept. 28 on behalf of the Joe Biden campaign for the 2020 November election. Corrinne Hess/WPR

Former second lady Jill Biden painted a picture of a new United States on Nov. 4, with her husband elected president and a country at ease.

Biden made two campaign stops Monday in Wisconsin to participate in an initiative to boost voting. Her husband, former Vice President Joe Biden, is the Democratic presidential nominee.

"You start to worry about your day and then it hits you — Joe Biden won the election and pretty soon, there will be a nationwide strategy to end the pandemic," the former second lady told a small group of supporters at a farm in Waukesha County on Monday afternoon. "You check the news and there is no pit in your stomach. Your shoulders don’t tense. For the first time in so long, you take a deep breath and feel hope."

Biden spoke to voters in the Town of Eagle about her husband's plan to boost the economy from the COVID-19 pandemic. She also discussed her husband’s other proposals to lower health care costs and protect coverage for people with pre-existing conditions.

Before Biden's 13-minute speech, former Wisconsin Supreme Court Justice Janine Geske spoke, saying she was endorsing a candidate for the first time in 40 years and it would be Joe Biden.

"I could not remain silent as this race went on," Geske said. "It is important that we look at what is happening at the (U.S.) Supreme Court today, tomorrow and the next few weeks because it will affect our lives and our children's lives for years and years to come. If Donald Trump succeeds in this appointment, we could see our country strip the country of affordable health care."

The former second lady said if the Affordable Care Act is repealed and the pre-existing conditions protections are no longer in place, the more than 7 million people who have had COVID-19 are now at greater risk.

"At almost every turn, this administration has failed to prevent and mitigate (coronavirus), they've made it worse," Biden said. "As the pandemic rages, they’re attacking the health care coverage millions of Americans rely on.”

Before her stop in Eagle, Biden was at Daisy Cafe & Cupcakery in Madison where she discussed several ways Wisconsinites can cast their ballot this year, including by mail, at a drop box location, early in-person or in-person on Election Day, according to a statement released by the Biden campaign.

Eagle is in Waukesha County, part of the suburban WOW counties (Waukesha, Ozaukee and Washington) that have historically turned out big for Republicans. Trump won the counties in 2016, but by smaller margins than Republican presidential candidate Mitt Romney in 2012. The WOW counties also saw higher levels of support for Libertarian Party candidate Gary Johnson in 2016.

The Joe Biden and Donald Trump campaigns have focused heavily on Wisconsin. Last week, Biden was in Manitowoc, where he focused his speech on the coronavirus pandemic; and a few days before that, he campaigned just over the border in the Duluth area.

The Trump campaign announced Monday the president will be in La Crosse and Green Bay on Saturday.