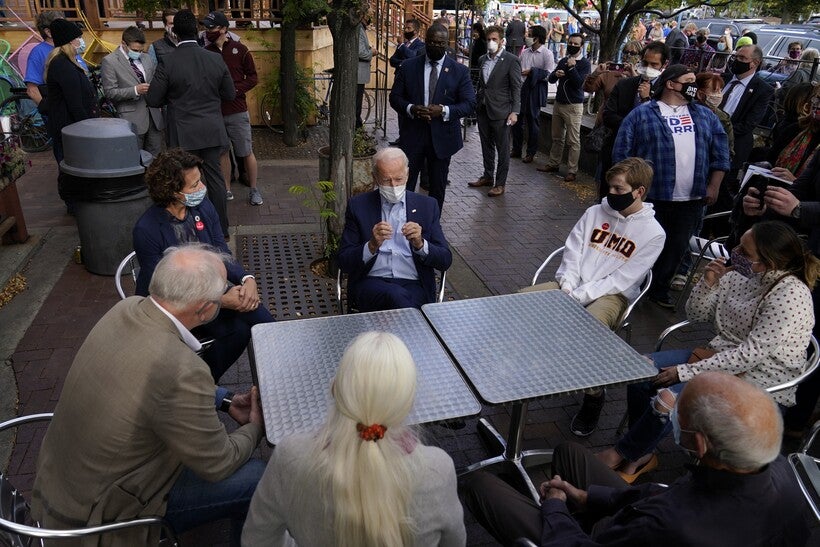 Biden also visited with local and state officials as well as first responders outside a popular downtown Duluth café.

The stop comes on the heels of President Donald Trump's fifth visit to Wisconsin the night before.

The two have been visiting battleground states they hope to capture in November. Both Biden and Trump were in Minnesota on Friday, the state's first day of early voting.

Biden said at the carpenters training center Friday in Hermantown, Minnesota, that the president has failed in his management of the COVID-19 crisis, noting the pandemic has claimed nearly 200,000 lives across the country.

"So many lives lost unnecessarily because the president is only worried about the stock market and his reelection," Biden said. "He refused to do what you're doing right here in this program: social distance, wear masks, sanitize," said Biden. "You're protecting your apprentices. He's not protecting America."

Biden also touted part of a $2 trillion plan to invest in infrastructure and clean energy, spurring demand for American products. He said the plan calls for retrofitting 4 million buildings and weatherizing 2 million homes, which he claimed would create 4 million jobs for skilled laborers.

Biden said all the work would be done with a prevailing wage and union labor.

"That's not hyperbole, that's a fact. That's how it will happen, and saving millions of barrels of oil in the process," said Biden.

Wisconsin Republican Party Chair Andrew Hitt said Friday that Trump has been phenomenal in his response to the pandemic, saying the CARES Act brought $2.2 billion to Wisconsin. He also highlighted the Paycheck Protection Program that provided $9.9 billion worth of loans to more than 85,000 Wisconsin businesses that protected more than 1 million jobs.

"I think the president has done a great job realizing that this is a horrible situation and it's extremely sad to see anybody lose their life because of it," said Hitt.

Hitt added Trump has focused on fair trade through the United States-Mexico-Canada Agreement (USMCA) that will open up new export markets for Wisconsin dairy farmers. Trump also announced a new $13 billion aid package to help farmers struggling during the pandemic at a central Wisconsin rally Thursday.

Hitt said Biden's plan to transition to clean energy and eliminate the use of fossil fuels would be devastating for Wisconsin.

"It's going to be devastating for Wisconsin farmers," said Hitt.

During his stop in northern Minnesota, Biden also argued Trump was trying to "rip away" people's health care as the Trump administration and 18 state attorneys general are asking the U.S. Supreme Court to strike down the Affordable Care Act.

"He's in the Supreme Court saying get rid of pre-existing conditions," said Biden.

Trump has said he's considering an executive order to require insurance companies to cover pre-existing conditions even though it's part of the ACA.

"High quality care on demand is just going to go away if Biden is elected," said Hitt. "There's a lot of Americans and Wisconsinites who are going to see the quality of their health care go down."

Trump lost Minnesota to rival Hillary Clinton in 2016. The state has not voted for a Republican candidate for president since 1972.