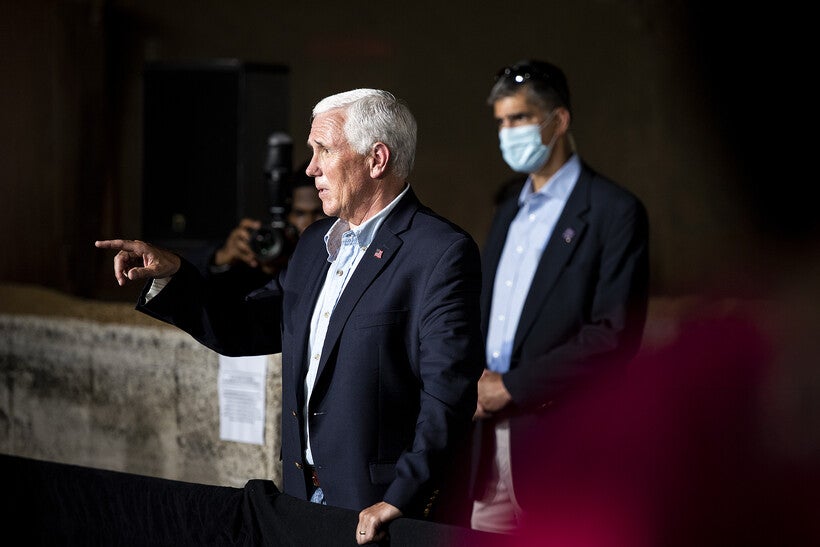 On the day after U.S. Supreme Court Justice Ruth Bader Ginsburg was brought to the Supreme Court to lie in repose, Vice President Mike Pence confirmed President Donald Trump will be nominating her replacement.

Pence, who spoke for about 50 minutes Thursday at Midwest Manufacturing Inc. in Eau Claire, said replacing Ginsburg is one of Trump's constitutional powers.

"And I promise you, come this Saturday, President Donald Trump will do his duty and we will nominate a principled, conservative woman to the Supreme Court of the United States," Pence said. "And after the United States Senate fulfills their duty to advise and consent, we’re going to fill that seat."

Ginsburg died last week. Within hours of her death, U.S. Senate Majority Leader Mitch McConnell, a Republican from Kentucky, said he would allow Trump to fill her seat. Ginsburg's death gives Republicans a chance to further secure their grasp on the court. With another appointment by Trump, conservatives would have 6-3 majority.

The Supreme Court is being closely watched for rulings on several lightning-rod issues, including abortion and the Affordable Care Act. In recent days, however, Trump has indicated the court could determine the outcome of the presidential election.

"So, we are standing for the rule of law, pouring a stronger foundation under our most cherished liberties," Pence said.

The Trump campaign has put an emphasis on Wisconsin, particularly the western part of the state, during the campaign. Pence's visit to Eau Claire was his third to western Wisconsin in three months.

Pence was in Onalaska in July and La Crosse on Labor Day. He was joined Thursday by Trump's daughter, Ivanka Trump, and U.S. Department of Labor Secretary Eugene Scalia.

Pence's visit to Eau Claire was part of a two-state stop in the region. Following his trip to Midwest Manufacturing, Pence headed to Minneapolis to meet with the group Cops for Trump.

While in Eau Claire, Pence touted the economy under Trump, and promised to bring law and order to every state and every city.

"The president said early on he was going to bring factories and jobs," Pence said. "He said the beautiful words, 'Made in the USA,' and that’s what’s happening."

The presidential campaign comes while the country has undergone a racial reckoning since George Floyd was killed in June while in police custody in Minneapolis. On Wednesday, Black Lives Matter protests continued for more than 100 days, including in Milwaukee, with many of the protesters calling for justice after a grand jury didn’t indict the Louisville police officers who killed Breonna Taylor.

Pence didn’t comment on Taylor during his campaign stop. He did say there was no excuse for what happened to Floyd.

"The president and I will always support Americans' right to peaceful protest, but there is no excuse for the rioting and looting that happened in Kenosha, Minneapolis or elsewhere. Burning business is not free speech," he said.

"Joe Biden would double down on the policies that have led to violence in American cities," Pence said. "We will always back the blue. We don't have to choose between backing law enforcement and backing our African American neighbors."

Pence said in the middle of the "Making America Great Again" rally that the coronavirus struck from China.

This week, the United States reached a milestone of 200,000 deaths. Wisconsin had 509 patients hospitalized in connection with COVID-19 on Wednesday — the highest number since the pandemic began. Wisconsin has also seen record numbers of new cases over the past week.

Pence called the milestone "heartbreaking" and said his heart goes out to the families who have lost loved ones. But he said with the work of health care providers and Trump’s actions, hundreds of thousands of American lives were saved.

In response to the vice president's visit, Democratic U.S. Sen. Tammy Baldwin, D-Wis.; Dr. Chris Kapsner, who is running for Wisconsin's 67th state Assembly District; and Bob Andruszkiewicz, a patient with pre-existing conditions, held a press conference. The group said the Trump administration's response to the coronavirus pandemic has led to hundreds of jobs being lost in Wisconsin and small businesses being shut down.

"Testing positive for COVID-19 is a pre-existing condition. As is asthma, diabetes, cancer, and pregnancy," Baldwin said in a statement. "If Donald Trump and Mike Pence get their way, these people, and the tens of millions of others across the country with pre-existing conditions, could lose their care. They could go bankrupt trying to pay their medical bills, their rent, and putting food on their family's table."