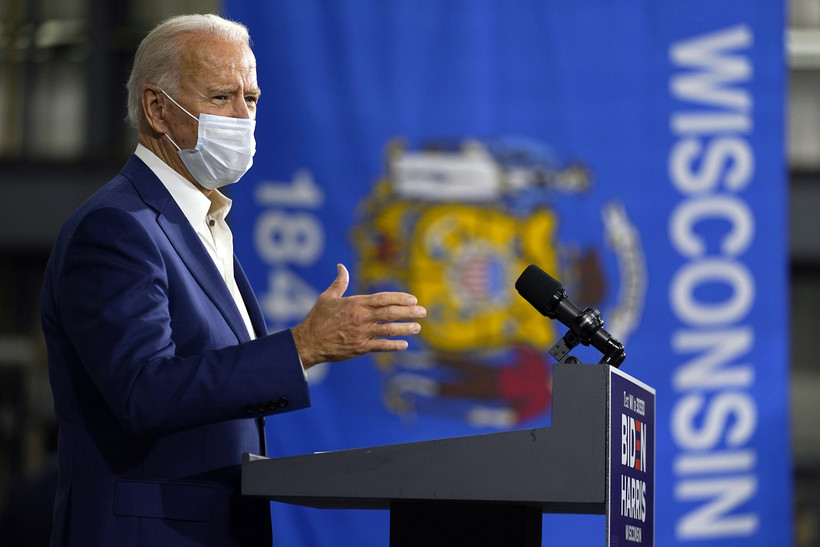 In Manitowoc, Biden Rips Trump Over COVID-19 Response As Cases Surge In Wisconsin

Former Vice President Joe Biden's visit to Wisconsin Monday coincided with two grim coronavirus milestones: The country is on the brink of 200,000 deaths connected to COVID-19 and Wisconsin continues to see its numbers rise, surpassing 100,000 over the weekend.

The Democratic presidential nominee spent much of his nearly 30-minute speech at the Wisconsin Aluminum Foundry Co. in Manitowoc talking about the disease.

Biden said he's worried the country is becoming numb to coronavirus, warning that between now and the end of the year, we could lose up 200,000 more lives if behaviors don't change.

"If we act, by doing what you are doing here in Wisconsin, wearing masks and making minimal requirements to meet this, we could save over 115,000 of those lives," Biden said. "So, I hope to God we don’t have to learn the same bad lesson we had to learn the first nine months."

Biden placed blame squarely on President Donald Trump for the loss of lives and number of cases, referencing journalist Bob Woodward's recent book in which Trump is quoted admitting to knowing how deadly the disease was in February and downplaying its seriousness to the American public.

"All his life, Donald Trump was bailed out, and when he was faced with a real crisis, he just wasn't up to it," Biden said. "He froze, he failed to act and America has paid the worst price as any nation in the world." 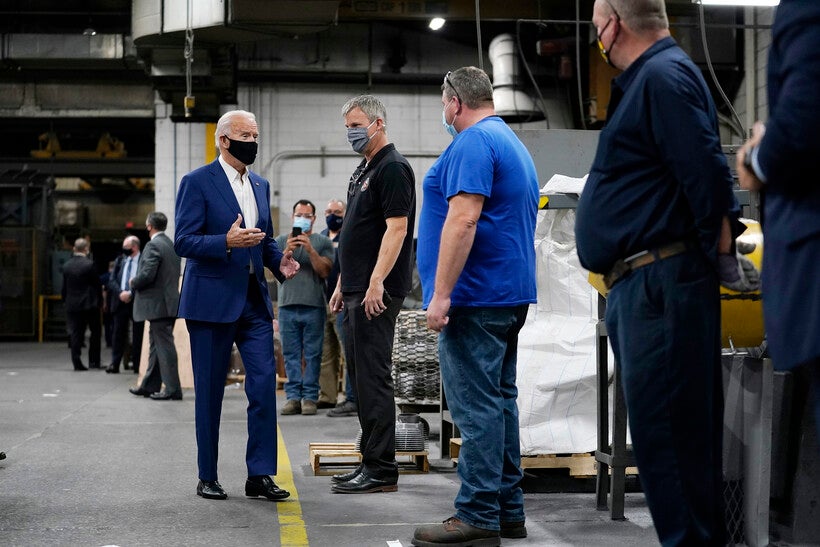 Biden's campaign stop was his second in Wisconsin in two weeks. He was in Kenosha earlier this month to meet with the family of Jacob Blake, the Black man shot seven times in the back by a Kenosha police officer. He campaigned just over the border in the Duluth area Friday.

Biden talked about his upbringing in Scranton, Pennsylvania and mentioned several times the difference between his world view and Trump’s "view from Wall Street."

He said Trump's recent comments blaming blue states for the severity of the coronavirus in the U.S. illustrates the president’s divisiveness.

"In the next few weeks, we have a chance to put anger and division behind us," Biden said. "We have to unite the country. This is not who we are. And we can. We’ve done it so many times in our country. If we get control of this virus. We can. We can be a safe and just nation. We can."

Outside the foundry, about 200 Trump supporters protested the campaign stop. There were also about 100 Biden supporters.

The event was closed to the public, with only about two dozen journalists and foundry employees allowed to hear the speech. Before Biden spoke, he toured the foundry and met with some employees.

"Joe Biden is trying to save face and cover up his extensive record of expanding Chinese influence in America at the expense of American workers," Kelly said. "Thankfully, Wisconsinites had President Trump to clean up Biden’s mess by gutting the disastrous NAFTA deal, negotiating the USMCA, and spearheading the Great American Comeback to create jobs and expand opportunity for Wisconsin manufacturers. It’s clearer than ever that Badger State voters will soundly reject Joe Biden’s malarkey in favor of four more years of President Trump in November."

During his speech, Biden didn't address the death of U.S. Supreme Court Justice Ruth Bader Ginsburg last week. The leading liberal on the court died Friday at age 87 of complications from cancer. Within hours of her death, U.S. Senate Majority Leader Mitch McConnell, R-Ky., said the would vote on a Trump nominee to fill her seat. Ginsburg’s death gives conservatives a chance to further secure their grasp on the court. Another appointment by Trump would bring the court's conservative majority to 6-3.