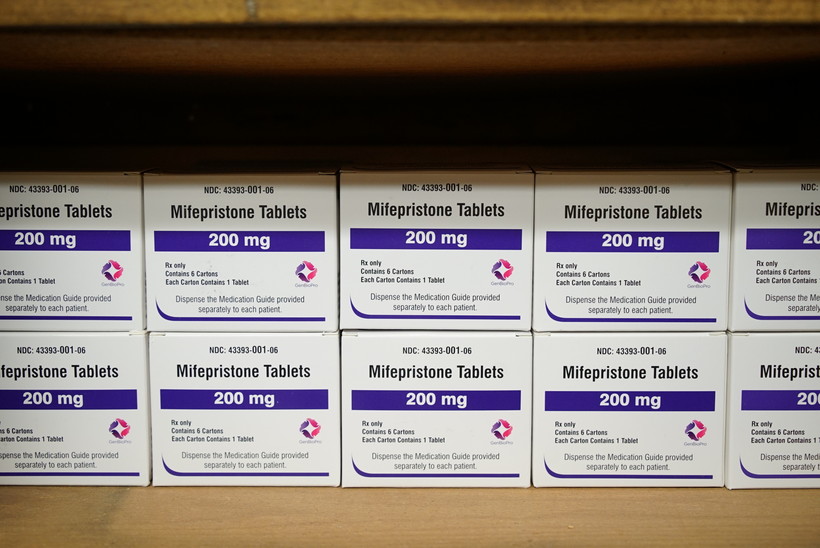 Boxes of the drug mifepristone line a shelf at the West Alabama Women's Center in Tuscaloosa, Ala., on Wednesday, March 16, 2022. The drug is one of two used together in "medication abortions." According to Planned Parenthood, mifepristone blocks progesterone, stopping a pregnancy from progressing. Allen G. Breed/AP Photo

Is it legal to access abortion pills through the mail in Wisconsin?

It's legal to receive the pills, but the sender could face criminal liability
By Danielle Kaeding
Share:

While abortion providers have stopped performing abortions in Wisconsin following the overturning of Roe v. Wade, questions remain about whether it is legal to access abortion pills through the mail in the state.

Prior to the U.S. Supreme Court’s decision, Wisconsin restricted access to the two medications approved by the U.S. Food and Drug Administration that are used to induce abortions: misoprosotol and mifepristone.

"Whereas other states allowed those medications to be obtained by mail, Wisconsin required steps, like in-person examination by a physician and in-person administration of the medication," said Miriam Seifter, an associate law professor at the University of Wisconsin Law School.

The U.S. Supreme Court's decision to overturn Roe v. Wade has brought Wisconsin’s 19th century abortion ban to the forefront. Seifter said the enforceability of that ban is unclear since the state has followed a different set of laws in recent decades that regulated abortion, but hasn't banned it.

"The lawsuit AG Kaul filed on June 28th seeks to have the court clarify that Wisconsin’s 19th century abortion ban is not in effect," said Samantha Standley, spokesperson for the Wisconsin Department of Justice.

If the ban were enforced, it would apply to medication abortion. Even so, Seifter said it would still be legal for people to receive abortion pills in the mail under state law.

"There could be liability for a sender, but not for the woman seeking the pills," Seifter said. "And, that's based on an express exception in the statute."

Physicians could be charged with a felony for providing abortion-inducing drugs through the mail. However, Seifter said it would be legal for a doctor to prescribe and administer abortion pills when necessary to save the life of the person giving birth. She said it’s also legal for doctors to utilize abortion pills for managing treatment of miscarriages.

Seifter said doctors are in a situation where they're likely to change the care they provide due to the uncertainty over what’s considered lawful.

Jenny Higgins, a professor and director of the Collaborative for Reproductive Equity at the University of Wisconsin-Madison, noted abortion pills are available for people to order online. She said research shows people use Plan C and Aid Access to order pills for self-managed abortions.

"While right now, I think our information suggests people could manage their own abortions without criminal retribution in Wisconsin, we would expect more legal efforts along these lines to criminalize such people in the future," said Higgins.

Seifter said making pregnant people criminally liable for seeking an abortion has been unpopular to date and hasn’t been part of abortion-related lawmaking across the states.

"But, in this legal landscape, it's not an impossible consideration," Seifter said.

In the meantime, Kaul has said he would not enforce the state’s abortion ban, although local prosecutors have said they would bring cases against providers who violate the state's ban. Seifter said monitoring and enforcing what goes through the mail would be difficult, adding that providers aren’t likely to expose themselves to liability.